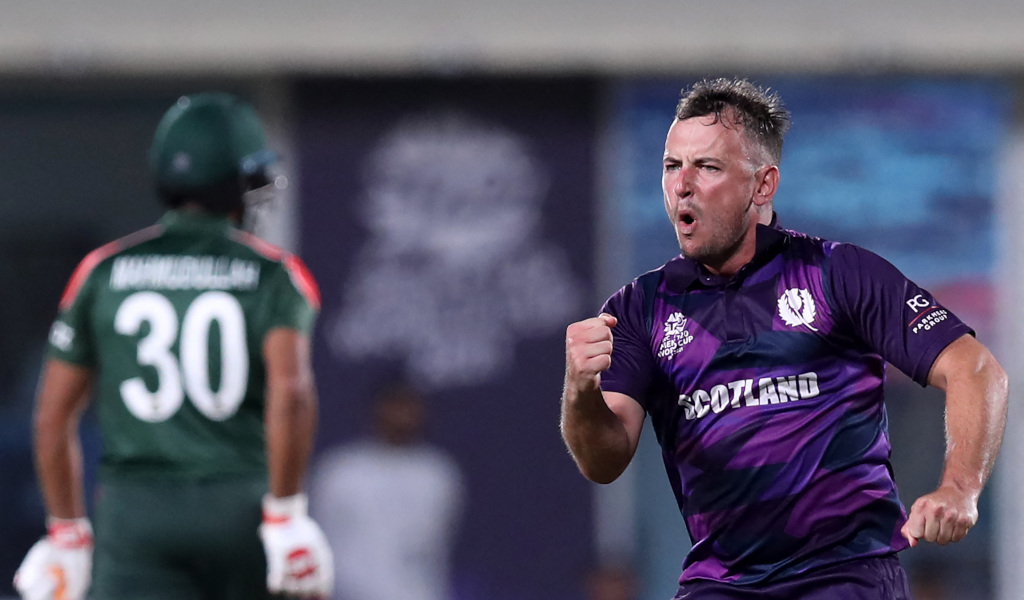 Scotland pulled off a remarkable fightback to win their Group B Round One T20 World Cup match against Bangladesh at the Oman Cricket Academy Ground in Al Amerat on Sunday 17 October.

After being put in to bat Scotland got off to a sluggish start, until George Munsey began lining up a few of the Bangladesh bowlers, however his attack was short-lived as glut of wickets after the powerplay left Kyle Coetzer’s team reeling.

Coetzer himself was the first wicket to fall, missing a straight one from Mohammad Saifuddin to depart for a seven ball duck.

Munsey and Matt Cross (11) put on 40 for the second wicket and threatened to establish a decent platform for Scotland to launch from.

Spinners Shakib Al Hasan and Mahedi Hasan soon had Scotland in tatters at 53 for 6. Shakib became the highest wicket-taker in Men’s T20Is with the wicket of Michael Leask.

The pair put on a 51-run stand which ended when Watt (22) holed out to Taskin Ahmed.

Greaves struck 45 off 28 balls before departing in the final over, with his efforts allowing Scotland to put a competitive 140 on the board. Quick Safyaan Sharif also struck a couple of lusty blows at the death to give the bowlers something to defend.

Bangladesh might have felt reasonably confident setting off after a target of 141 but Josh Davey struck early, removing Soumya Sarkar (5) in the second over.

Hampshire seamer Brad Wheal and Greaves then did serious damage to the Bangladesh middle order. Greaves turned the match around with the ball as well, claiming the huge wickets of Mushfiqur Rahim and Shakib.

With four overs remaining Bangladesh needed 49 runs to win, but with Mahmudullah still out in the middle the game was far from over.

When Wheal claimed the big scalp of Mahmudullah in the penultimate over the tide had well and truly turned in Scotland’s favour.

Sharif held his nerve bowling the final over and Scotland have a win that puts them in a strong position.