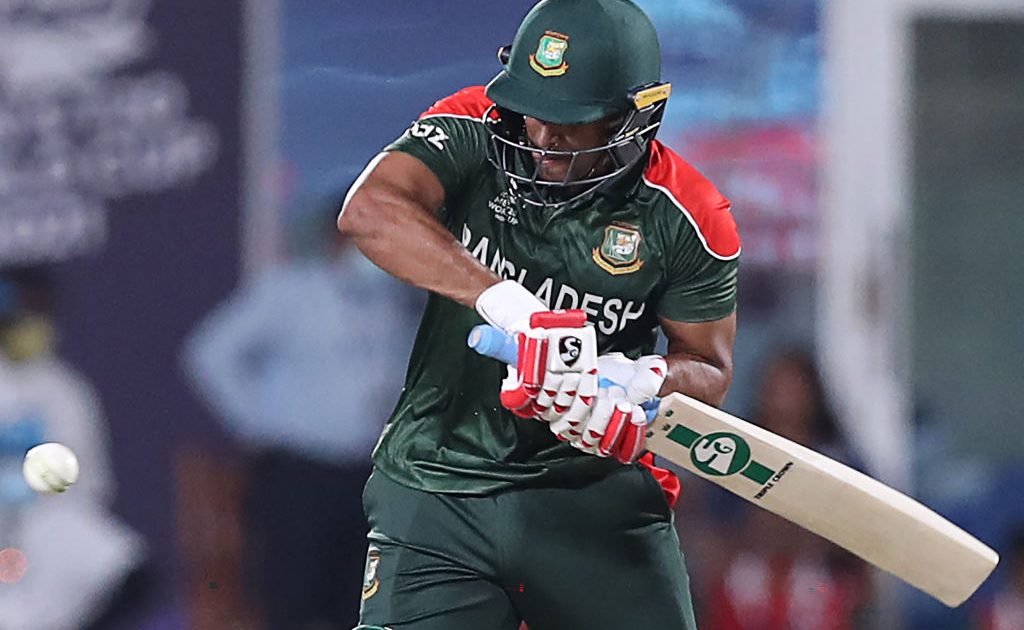 Shakib Al Hasan produced a match-winning performance as Bangladesh qualified for the Super 12s with a 84-run win against Papua New Guinea.

Shakib, second in the T20I all-rounder rankings, took four for nine in a masterful spell to help dismiss PNG for just 97.

The star man also contributed with the bat, scoring 46, as the Tigers made an imposing 181 for seven.

While PNG’s fielders took some spectacular catches, with the bat they struggled to fend off Shakib, with Kiplin Doriga the only one to offer some resistance with an unbeaten 46.

In Bangladesh’s dig Mohammad Naim was out second ball to Kabua Morea after he picked out a fielder at deep square leg. However, Shakib partnered Liton Das at the crease and the pair helped stave off an early crisis with a 50-run partnership, with the former cleverly rotating the strike in a phase of the game that saw the Tigers struggle for boundaries.

That partnership was finally broken when Das was brilliantly caught in the deep by Sese Bau off captain Assad Vala while attempting a slog-sweep. At that point, with a run-rate under seven, PNG had done well to restrict Bangladesh in the first half of their innings.

Shakib may have hit an 86-metre six in the tenth over, the Tigers’ first boundary in 32 balls, but left-arm spinner Simon Atai removed Mushfiqur Rahim for five, as Bangladesh continued to struggle.

Mahmudullah and Shakib tried to push up the tempo, with both clearing the rope, before Charles Amini took a spectacular catch by diving forwards at long on to dismiss Shakib.

The pressure then fell on Mahmudullah to lead with the bat and he started well by cutting two balls to the boundary to reach 29 off 18 balls. He hit two sixes and a four off Chad Soper in the 17th over to reach his half-century off just 27 balls, the fastest 50 in the tournament so far. However, he was out on the 28th ball after chipping a full toss to deep square leg.

Nurul Hasan provided an entertaining cameo, with fours from his first two balls, while Afif Hossain made 21 before another brilliant catch – this time from Damien Ravu – saw him head back to the pavilion for 21.

Mohammad Saifuddin finished the innings in style, with sixes off the last two balls and a four from a free hit, to leave Bangladesh on 181 for seven.

PNG made a patient start with the bat but lost their first wicket in the third over, as Lega Siaka was trapped leg before by a Saifuddin in-swinger, while Taskin Ahmed removed Vala five balls later thanks to a fine catch by Hasan behind the stumps.

Not to be outdone by PNG’s superb fielding were on fire in the field, as Naim sprinted round from wide long on to take a spectacular diving catch to dismiss Amini at the beginning of the fifth over, while the bowler, Shakib, picked up another wicket three balls later as PNG fell to 14 for four.

Shakib returned four overs later to claim his third wicket, with Bau caught by Naim in the deep, before the big-hitting Norman Vanua fell to Mahedi Hasan mid-way through the 10th.

Doriga offered some resistance with an impressive innings but Bangladesh chipped away and eventually bowled PNG out in the final over.