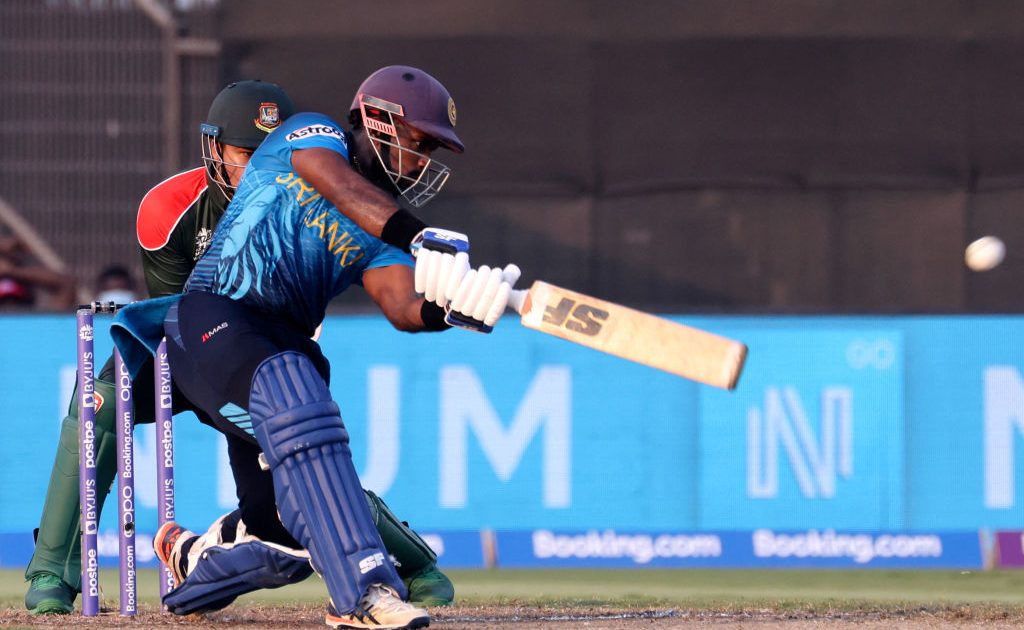 Asalanka struck five sixes in his unbeaten 80 from 49 balls and Rajapaksa celebrated his 30th birthday in style with 53 from 31 as the Lions chased 172 to complete their highest successful run chase in ICC Men’s T20 World Cup history with seven balls to spare.

Half-centuries from Mohammad Naim and Mushfiqur Rahim had led Bangladesh to a challenging 171 for four and two wickets in the space of four balls for Shakib Al Hasan seemingly put them in the driving seat in the chase.

But the Tigers paid for costly drops, Liton Das putting down both Rajapaksa and Asalanka on the boundary in the course of a blistering 86-run stand which turned the tide in Sri Lanka’s favour.

Both sides made one change from their final qualifying group fixtures, with Sri Lanka plumping for the seam of Binura Fernando over the spin option of Maheesh Theeksana, who was nursing a slight injury, and opting to bowl first after winning the toss.

The Lions attack had mauled Netherlands on Friday, dismissing the Dutch for 44, but found Bangladesh openers Naim and Das in a determined mood in the powerplay.

The pair had struggled for fluency in their Group B fixtures, with opening stands of 8, 11 and 0, but successive free hits following Dushmantha Chameera overstepping allowed Naim to free his arms in the third over.

Naim lost his partner with the score on 40, bringing the influential Shakib to the crease, and he twice pierced gaps through the off-side before missing a straight one from Chamika Karunaratne, the pick of the Lions attack, to depart for 10.

Naim and Mushfiqur began their partnership by rotating the strike effectively, carrying the Tigers to 72 for two at the halfway mark, before moving through the gears in style.

Mushfiqur smashed the first six of the innings over deep mid-wicket in the 11th over before slog-sweeping Binura into the crowd to the delight of the vocal Bangladesh supporters, who were on their feet once more when Naim drove Kumara for a boundary which saw him to his second half-century of the tournament.

Mushfiqur kept up the charge following Naim’s dismissal, finding gaps behind square on both sides of the wicket, and his half-century arrived with 11 deliveries of the innings remaining.

A typically inventive scoop to the fine-leg fence then provided a fitting conclusion to a sparkling knock as Bangladesh set the Lions 172 to win.

Nasum Ahmed, playing his first match of the tournament, opened the bowling for the Tigers and got his side off to a perfect start by clean bowling Kusal Perera, attempting a slog sweep.

New batter Asalanka succeeded where his teammate had failed, heaving Nasum over deep mid-wicket for the second maximum of a productive third over in a sign of what was to come.

Pathum Nissanka also took a liking to spin, lofting a glorious straight six off Mahedi Hasan as Sri Lanka raced to 54 for one at the end of the powerplay – 13 runs better off than Bangladesh at the same stage.

Enter Shakib, so often the man with the golden arm, who removed Nissanka and Avishka Fernando to bring the game firmly back into the balance and move out on his own as the leading wicket-taker in ICC Men’s T20 World Cup history with 41, two clear of Shahid Afridi.

The pendulum swung further towards the Tigers when Wanindu Hasaranga sent a Mohammad Saifuddin slower ball straight to Naim at long-on but Rajapaksa’s clean hitting quickly brought the Lions right back into contention.

The batter lofted Afif Hossain over extra cover for six and survived a let-off later in the 13th over when Das misjudged a routine catching opportunity at deep square-leg.

Asalanka continued to look in fine fettle at the other end and having matched Mushfiqur in bringing up a half-century in 32 balls, he fired two sixes in one costly Mahmadullah over to keep his side ahead of the required rate.

Das then put down Asalanka at deep extra-cover and the pair cashed in on their good fortune, Rajapaksa blasting consecutive sixes off Saifuddin in a decisive 16th over which saw 22 added.

The Tigers turned to Shakib but Asalanka deposited him into the stands and Rajapaksa’s departure came too late to spark a change in fortunes.

Fittingly, it was Asalanka who sealed the deal with a dab to the third-man boundary to spark Sri Lankan celebrations at the end of a captivating contest.