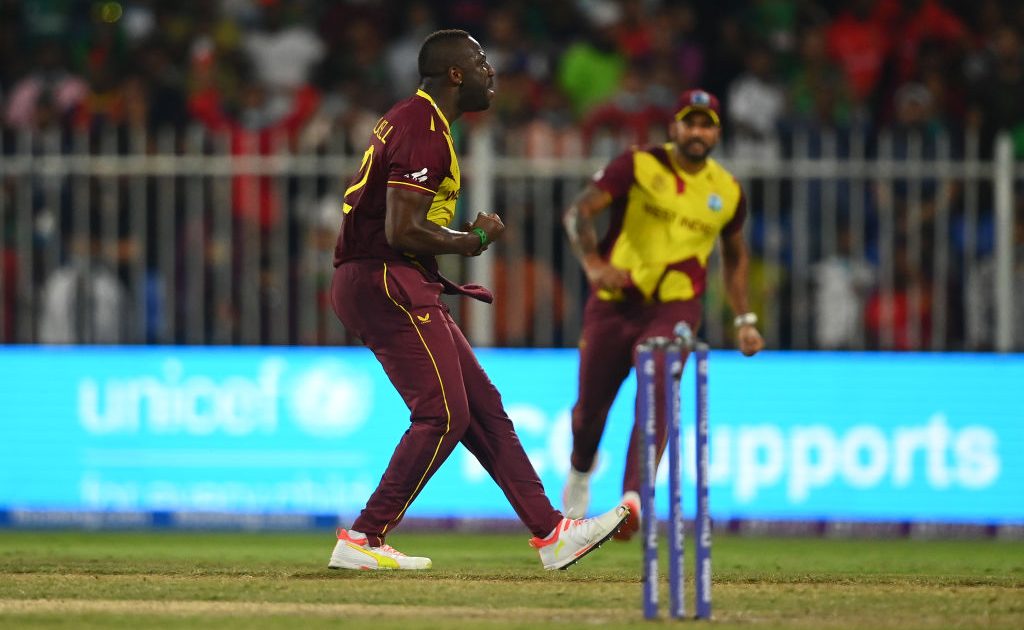 The West Indies sealed a tight encounter against Bangladesh, winning by just three runs off the final ball of the game to knock Bangladesh out of the ICC Men’s T20 World Cup 2021.

Nicholas Pooran crashed 40 of 22 to rescue West Indies innings having lost the toss and been put into bat, as they posted 142 for seven.

Bangladesh were steady in their reply but needing 13 off the final over, they could only manage 10 as the Windies kept their own qualification hopes alive.

Debutant Roston Chase was into the action early on as opener Evin Lewis was caught easily by Mushfiqur Rahim at square leg.

After being promoted to open, ‘Universe Boss’ Chris Gayle was not all-conquering, instead being clean bowled by Mahedi Hassan having made four off ten.

Shimron Hetmyer then fell in the seventh over and it would be four overs before the West Indies got a boundary, Chase combining with Kieron Pollard to steady the ship.

Pollard then faced choppy waters as Bangladesh went up for a review for LBW but the DRS showed the impact was outside off stump and Pollard was safe, for now.

Two balls later, Pollard was walking off retired hurt, a ball later new batter Andre Russell was back in the dugout, run out without facing as Taskin Ahmed got a toe to Chase’s drive back down the ground.

Russell’s dismissal brought out Pooran who made 40 off 22 to rescue the West Indies to 119-5 and Chase was then undone by Shoriful Islam, who knocked over his leg stump.

Jason Holder survived the hat-trick ball but his partner Dwayne Bravo fell three balls later as Pollard returned to the crease with five balls to go. He and Holder crashed what turned out to be three crucial sixes to push the West Indies to a respectable score.

Captain Pollard was not the only one hurt, with Shakib Al Hasan noticeably hobbling between the wickets as he opened Bangladesh’s chase.

And it was Shakib who was the first batter to go, sending an easy catch to Holder to leave Bangladesh on 21 for one.

Mohammad Naim dragged the ball back onto his stumps off the bowling of Holder as the Tigers ended the powerplay on 29-2, the same as the Windies.

From there, Bangladesh kicked on reaching 60 before the loss of their third wicket, Soumya Sarkar sending the ball into the diving hands of Gayle.

The next wicket followed a similar pattern, Bangladesh adding 30 runs before losing a wicket, this time Rampaul bowling Mushfiqur for eight.

With three overs remaining the Tigers needed 30 from 18 balls with Liton Das crashing a four to swing the game towards Bangladesh as he and Mahmudullah looked to be controlling the chase.

Liton could not stay until the end though, as the long limbs of Holder caught him on the boundary, with six balls to go Bangladesh needed 13 runs.

The West Indies were plagued by fielding errors missing run-out chances, dropping catches and missing balls, but with Bangladesh needing a boundary off the final ball, Russell held his nerve to bowl West Indies to a narrow victory.