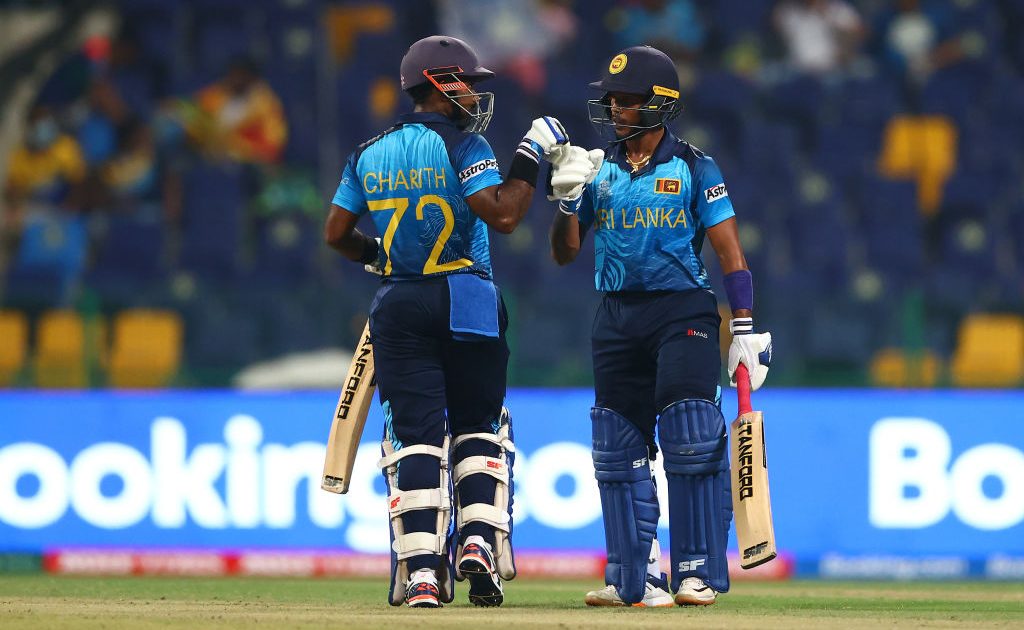 The pair put on 91 for the second wicket, with Asalanka making 68 and Nissanka 51, as their side soared to 189 for three to set a challenging target.

Kieron Pollard’s men were never equal to the task and the late heroics of Shimron Hetmyer, to the tune of 81 not out, were in vain as they ended on 169 for eight from their 20 overs.

The West Indies opted for the off-spin of Roston Chase in the opening over for the first time in the tournament to counter Kusal Perera, who tentatively poked him for four with the third ball.

Both the southpaw, searching for his first big score, and Nissanka settled well and Perera was typically severe on a short ball from Ravi Rampaul, smacking it flat over square leg for six.

Perera perished on 29 when he offered a sharp return catch to Andre Russell, who adjusted his weight superbly to dive down and pouch the catch.

From 42 for one, Nissanka and Asalanka embarked on their partnership that was characterised by subtle, fine glances and innovative use of the crease to score heavily behind square.

Akeal Hosein’s spin had posed Nissanka problems and he countered by using his reverse sweep to swat him for a one-bounce four to bring the stand to 50.

Frustration grew in the field when Russell found Nissanka’s outside edge only for it to fly to the fence and then he strayed down the leg side and was clipped to the boundary by Asalanka.

They built a partnership of 91 from 61 balls, that came to an end when Dwayne Bravo’s latest slower ball variation forced Nissanka into a big swing and he was caught by Hetmyer.

Sri Lanka barely slowed down and with skipper Dasun Shanaka freeing his arms to complement Asalanka, the 17th and 18th overs went for 16 and 17 runs respectively.

Two further blows for four from each of them was followed by Asalanka’s superb knock coming to an end when he top-edged a pull off Russell that Hetmyer did well to dive forward and grab.

Rampaul bowled an excellent final over but the momentum lay firmly with Sri Lanka and rolled over into the start of the run chase.

After a pair of quick boundaries from Evin Lewis, he forced the other Windies opener to chop onto his stumps and it was 10 for two.

Fernando was in the thick of it and he took punishment from Nicholas Pooran, who cut loose with three boundaries in four balls from his second over including an emphatic six over wide long-on.

Sri Lanka get their man

Just as Chase looked to have settled, he fell victim to a blinding diving catch at midwicket from Bhanuka Rajapaksa, who threw himself to his left to take a stunner and dismiss him for nine.

Pooran and Hetmyer tried to steady the ship but the latter failed to score quickly enough to prevent his partner from having to take undue risks.

They combined for 30 from 34 balls but Pooran went for one big shot too many and holed out off Dushmanatha Chameera to long-off for 46.

Oddly, the loss of Pooran seemed to free Hetmyer to play his natural game and he hooked the very next ball for six and then crashed Chameera for four in an eventful 13th over.

The revival wasn’t to last, however, as Andre Russell offered a tame return catch to Chamika Karunaratne to make it 94 for five, a blow that looked fatal to Windies’ chances.

The equation looked bleak and although Hetmyer swung Karunaratne for three fours that over, Pollard was clean bowled for a golden duck to settle the matter at 107 for six.

Hetmyer played a superb and largely lone hand, hitting Karunaratne for successive sixes and then a four, ending on a defiant unbeaten 81 from 54 balls.

It was an emphatic way for Sri Lanka to finish an encouraging tournament, while West Indies will hope to end their title defence with victory over Australia on Saturday.