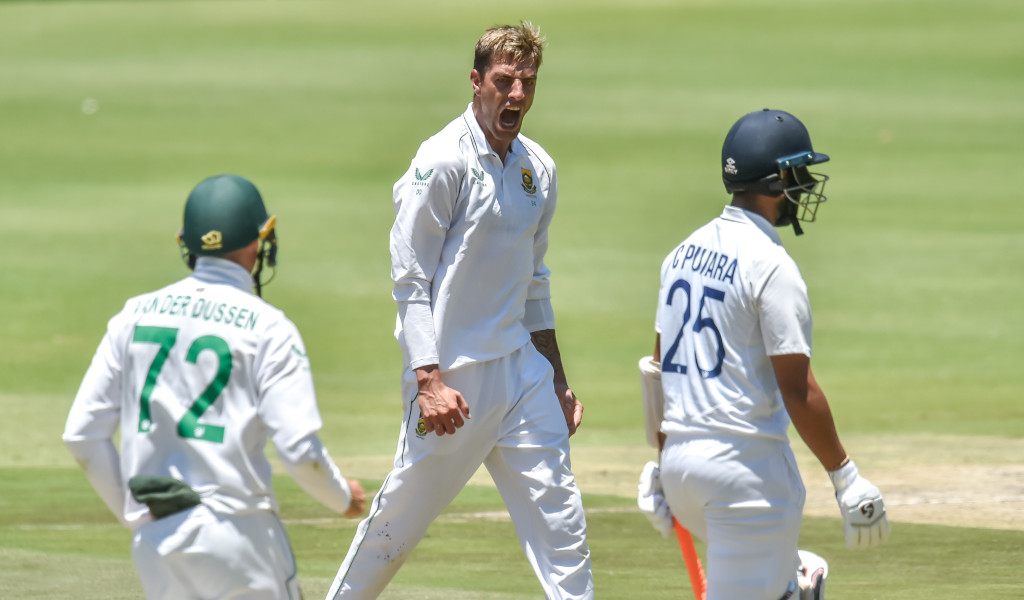 South Africa fast bowler Duanne Olivier admitted that he was feeling nervous on making his return to the Proteas Test team.

Olivier played his first Test for South Africa in three years having seen his Kolpak contract with Yorkshire terminated in 2020.

The fast bowler admitted that the ball wasn’t coming out as he would have liked early on in the second Test against India at the Wanderers.

Olivier said that there was a clear gameplan in place after India won the toss and elected to bat first, and was disappointed not to execute those plans well in his first spell.

The returning quick, who leads South Africa’s First-Class competition’s wicket-takers, would get it right later in the first session.

Olivier bagged the wickets of Cheteshwar Pujara and Ajinkya Rahane off successive balls to swing the morning session in the Proteas favour.

For Olivier, it was like making his Test bow all over again.

“I was very nervous today. It was about trying to have good energy with the ball to put the team in the best position.

“We want to make life easier for the (Proteas) batters. I am still trying to bowl a touch fuller and at a good pace.

“I know when the ball comes out a bit floaty; this morning, there were a couple that were really full.

“You’re not always going to get it right, but I always try to do better.”

Olivier returned figures of 3 for 64 as India were bowled out for 202, combining well with Marco Jansen, who proved to be the day one hero with his 4 for 31.

The speed measurements on the broadcast indicated that Olivier was down on pace from his usual 140 kmph standard.

The quick says that while pace isn’t his number one priority he strives to improve his speed.

“I don’t know what’s going on with the speed gun, to be honest,” he said.

“I don’t look at the speed gun to say, ‘My pace is down now’. For me, I know whether I’m getting it right or not.

“Sometimes, like today (Monday), it does get a bit floaty, and it’s OK. As a person, you try to improve … and I’ll do a bit of reflection.

“There were certain patches that were really good and certain ones that weren’t that good on a personal note.

“But there’s a second innings to come, and that’s where I’ll try to do those things better.”

South Africa will resume on 35 for 1 on day two still trailing India by 167 runs.