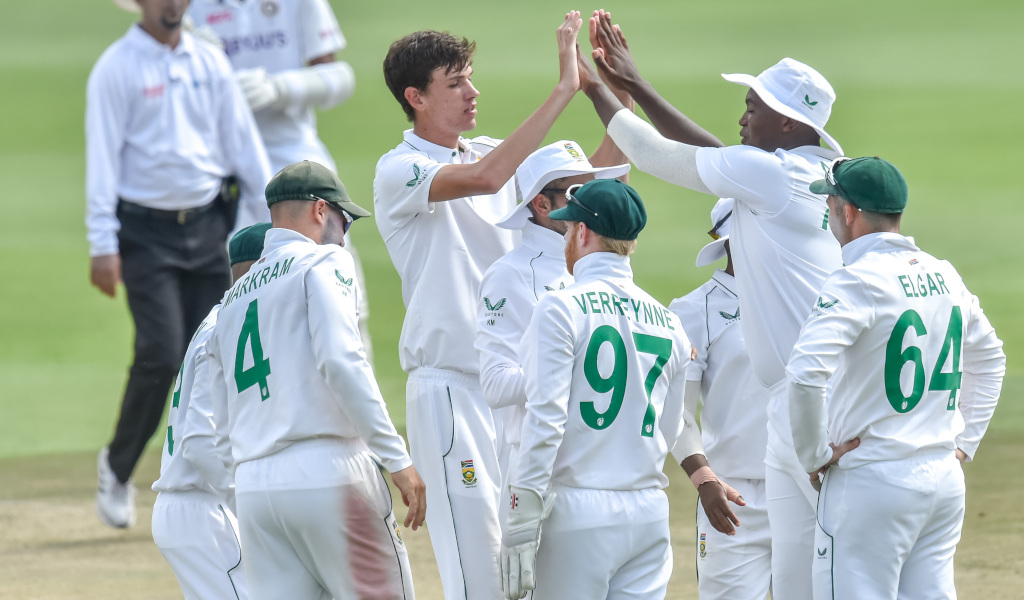 India won the toss and elected to bat first in the second Test against South Africa at the Wanderers but despite being skittled just after tea its too early to assess the merits of KL Rahul’s choice.

Rahul was the stand-in skipper with Virat Kohli ruled out of the match after suffering from persistent back spasms.

South Africa’s attack was spearheaded by Kagiso Rabada and Duanne Olivier but both were wayward up front allowing Mayank Agarwal and Rahul to enjoy a relatively trouble-free first hour.

Right after the first drinks break though, things began to unravel for India, with Marco Jansen drawing an edge out of Agarwal.

Jansen would claim another three victims including snapping up the prized wicket of Rahul.

The India skipper top-scored with a patient 50, while Ravichandran Ashwin chipped in with a hard-hit 46, that ensured that India made it past 200.

Jansen made the most of the steep bounce on offer at the Wanderers, troubling most of the batsmen with his short ball.

The young left-armer had the remarkable figures of two for nine after 9.5 overs but he saw his economy rate take a hit when Ashwin decided attack was the best form of defence.

Ashwin played one shot too many though and would become Jansen’s fourth victim.

Olivier had also rebounded from his wayward first spell to rip out the heart of India’s middle order in two balls, first ending a stubborn vigil from Cheteshwar Pujara and then nicking off Ajinkya Rahane first ball to ensure the Proteas dominated the morning session.

Kagiso Rabada got in on the act with the wicket of Hanuma Vihari, the fourth to fall, thanks to a sharp catch from Rassie van der Dussen, and would return to wrap up the tail, denying Jansen his five-for.

In response, South Africa again made a poor start, with Aiden Markram falling leg before wicket to Mohammed Shami for seven in just the fourth over.

South African skipper Dean Elgar (11*) and Keegan Petersen (14*) however, survived to the close.

Petersen was dropped by wicketkeeper Risabh Pant off Jasprit Bumrah when he had 12 and it remains to see just how costly that missed chance will be.

There was also an injury scare for the Indians when Mohammed Siraj left the field clutching his right hamstring after bowling the fifth ball of the penultimate over of the day.