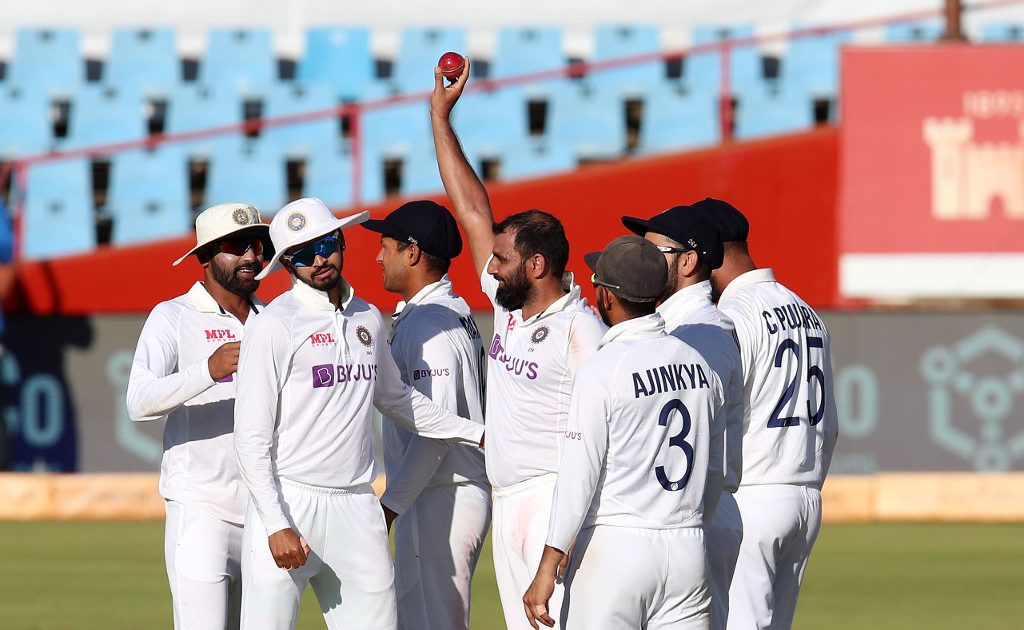 The visiting India side took command of the first Test against South Africa at SuperSport Park in Centurion after a superb display of fast bowling.

India finished the day on 16/1 in their second innings after bowling out the Proteas in 63 overs.

Mohammed Shami was the pick of the bowlers and finished with figures of 5/44, while Jasprit Bumrah, Mohammed Siraj and Shardul Thakur shared the wickets among them.

Debutant Marco Jansen took the wicket of Mayank Agarwal (4) in the final over of the day to hand the visitors a 146-run lead going into the fourth day.

Captain Dean Elgar (one) was the first to fall for the Proteas, caught behind by Rishab Pantjust before lunch off Bumrah’s bowling, who spent some time off the field with a twisted ankle.

Shami cleaned up both Aiden Markram (13) and Keegan Petersen (15), and when Ajinkya Rahane caught Rassie van der Dussen (three), the Proteas were reeling at 32/4.

Temba Bavuma, who top-scored with 52 and Quinton de Kock (34) spent some time at the wicket but before the partnership really made a significant impact on the match, the keeper played on off Thakur’s bowling.

The lower order each made minor contributions to give the Proteas a modicum of respectability after Shami had Bavuma caught behind.

Wiaan Mulder (12), another of Shami’s caught behind victims, Jansen (19), Kagiso Rabada (25) and Keshav Maharaj (12) each struck a few boundaries before being sent to the shed.

India resumed the morning on 272/3 but Ngidi, Rabada and Jansen ran through the batting line-up and dismissed the visitors for 327.

Ngidi took his second six-for in Centurion with figures of 6/71, while Rabada took 3/72 and Jansen got his Test career on track with the last wicket of Bumrah.

Centurion KL Rahul (123) added only one to his overnight score when he was caught behind by De Kock off Rabada, before Ngidi – who took all three wickets on day one – got in the action when the other overnight batsman Rahane (48) also nicked off.

Ravichandran Ashwin (four) got a leading edge and was caught by Keshav Maharaj at short cover off Rabada’s bowling, and Ngidi registered his five-for when Rishabh Pant (eight) was caught at short-leg.

Thakur (four) soon followed when Rabada had him caught behind and Ngidi got his sixth when Shami (eight) provided De Kock with his fourth catch of the innings.

The final wicket added 19 runs before Bumrah (14) provided Wiaan Mulder with some catching practice in the slips.