Is Joe Root still part of the Fab Four?

Joe Root’s double century in the second Test in New Zealand was a timely reminder of his status as England’s best Test batsmen. His 441 ball innings was his longest in Test cricket and means he has now overtaken Wally Hammon to become England’s 10th highest run scorer. But is Root still a member of the Fab Four? The band of the world’s finest batsmen – consisting of Root, Virat Kohli, Kane Williamson and Steve Smith.

Williamson has failed to build an innings of note in the series with England so far, but will no doubt bat for the whole of the final day of the last Test match to secure the series victory for the Black Caps.

Smith, star of The Ashes in England this summer, has had a relatively lean series against Pakistan as he has instead watched David Warner and Mini-Me Marnus Labuschagne pile on the runs Down Under.

Kohli scored a century last time out in their victory over Bangladesh, after a double century of his own in the series before against South Africa.

The standing of the other three as part of this group is never questioned, but a relative dip in form over the last year for Root has many suggesting he has not been able to deal with the added pressure of the Test captaincy, and the fab four may in fact now be a three.

But what do the numbers suggest?

Root is the only one of the four whose batting average has seen a steady decline since 2014, when he was top of the pile. Both Kohli’s and Smith’s averages have been gradually improving, and Williamson’s has been remarkably constant throughout that time. The points at which Root, Kohli and Williamson took on the Test captaincy is marked on the graph, with Kohli showing a dramatic rise in his average on being awarded the prestige of leading his side, Williamson’s remaining the same, but Root’s dropping almost as much as Kohli’s has risen.

Root is the half-century master, often reaching 50 before anyone’s really noticed. He’s a long way off Both Kohli and Smith in the century stakes and needs four more doubles to match the Indian captain. 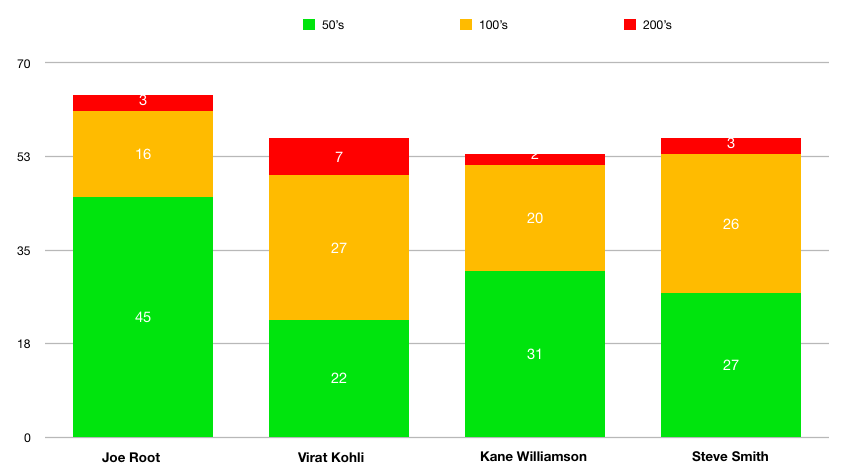 Root’s poor conversion of half centuries into centuries and double centuries is another stick used to beat the England captain, and it’s a fair point. Where he loses concentration, the other three – Smith and Kohli in particular – seem to become more attentive. Their ‘zone’ is inpenetrable, whereas Root seems to snap in and out of his far too easily.

But this is an area he’s always had to improve, and not one that has developed in line with his drop in form. The now England captain’s conversion rate was an issue long before he took on the skippering mantle. Virat Kohli is a freak in these terms – to score more centuries than half centuries is insane.

There is little doubt that three of the members of the Fab Four have cemented their places in their Enid Blyton style collective, through churning out runs and leading their countries to success. But Root has arguably more pressure on his shoulders than the others. Kohli may be the most recognisable face in India, but he, like Williamson and Smith has other batsmen who contribute huge scores if he fails. Root does not have that luxury. No other player in England’s batting lineup averages over 40, so Root is relied far too heavily upon to score runs in a team severely lacking in batting talent and has become the scapegoat for England’s poor run of form in the Test arena. If England don’t score enough runs it’s his fault, and if they don’t bowl a team out quickly enough it’s down to his poor captaincy. 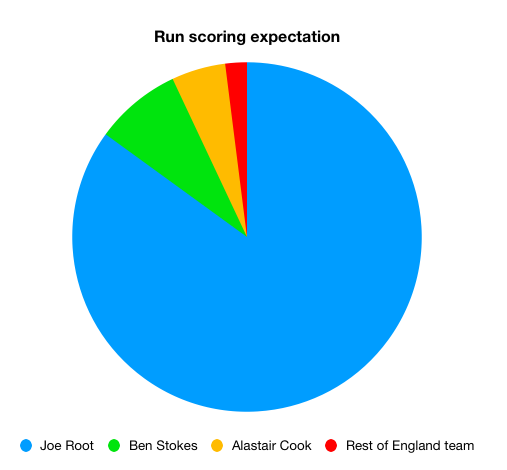 If Joe Root was Indian, Australian or  a Kiwi he would still very much be a member of the Fab Four, but as he’s an Englishman, we can no longer claim he can dine at the very top table.