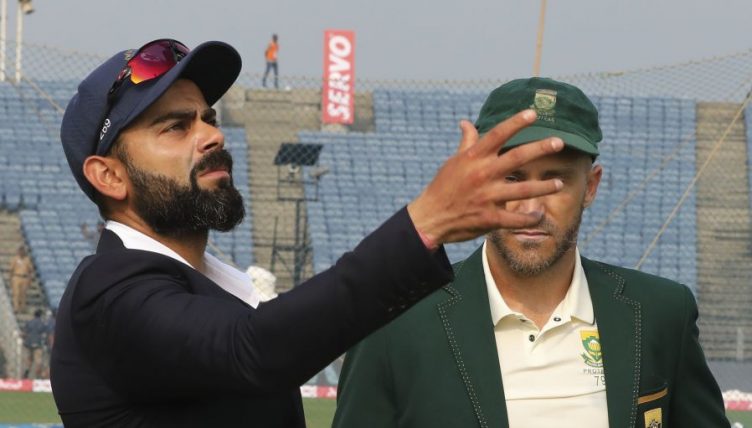 India wrapped up an innings victory over South Africa after overcoming more lower-order resistance from Vernon Philander and Keshav Maharaj in Pune.

The Proteas began day four following on 326 behind India‘s 601 for five declared, and they were soon in deep trouble as they reached lunch 74 for four – Ravi Ashwin with two wickets as only Dean Elgar (48) contributed with the bat.

Quinton De Kock went straight after lunch and though Temba Bavuma made 38, the tourists crashed to 129 for seven before Philander and Maharaj, who scored 44 and 72 in a first-innings stand of 109 for the ninth wicket, came together once more.

This time they added 56 for the eighth but when Philander was caught behind down the legside off Umesh Yadav for 37, the last three wickets fell in eight balls with Maharaj last out for 22.

Yadav took three for 22 and Ravindra Jadeja three for 52 as India won by an innings and 137 runs to take an unassailable 2-0 lead in the three-match series.

Tailenders Vernon Philander and Keshav Maharaj staged a late rally, but it was India who took control of the third Test against South Africa in Pune.

Resuming on 36 for three in reply to the home side’s 601 for five declared, the Proteas slipped to 162 for eight before the pair came together.

Maharaj went on to score a career-best 72 from 132 deliveries and Philander struck an unbeaten 44, with the pair adding 109 for the ninth wicket as the tourists were dismissed for 275.

Ravichandran Ashwin finished with four for 69 to give India a lead of 326 and it remains to be seen if they will enforce the follow-on.

The hosts’ captain hit 254 not out, bettering by 11 his previous format best from almost two years and going past 7,000 Test runs in the process, in a total of 601 for five declared on day two of the second Test.

Having completed his 26th Test hundred – and first of the year – in the morning session, Kohli attacked after lunch and, by reaching 150 for the ninth time, broke Australian Don Bradman’s record of most 150-plus scores as captain.

However, the torment did not end there for the tourists after they were reduced to 36 for three at stumps, 565 behind, with left-arm spinner Keshav Maharaj taken for precautionary scans on a shoulder problem.

Mayank Agarwal struck another century as India closed day one of the second Test against South Africa in Pune in a commanding position.

Agarwal, who made a double hundred in India’s 203-run first Test win in Visakhapatnam, scored 108 as the hosts finished on 273 for three.

South Africa’s Kagiso Rabada dismissed fellow opener Rohit Sharma for 14 in the 10th over, but Agarwal put on 138 with Cheteshwar Pujara (58) for the second wicket.

Pujara was caught by Proteas skipper Faf Du Plessis off Rabada with the score on 163 and Agarwal was dismissed in identical fashion in the 61st over to leave India on 198 for three.

India captain Virat Kohli finished the day well placed on 63 not out and Ajinkya Rahane will resume on 18. Rabada finished the opening day with figures of three for 48.