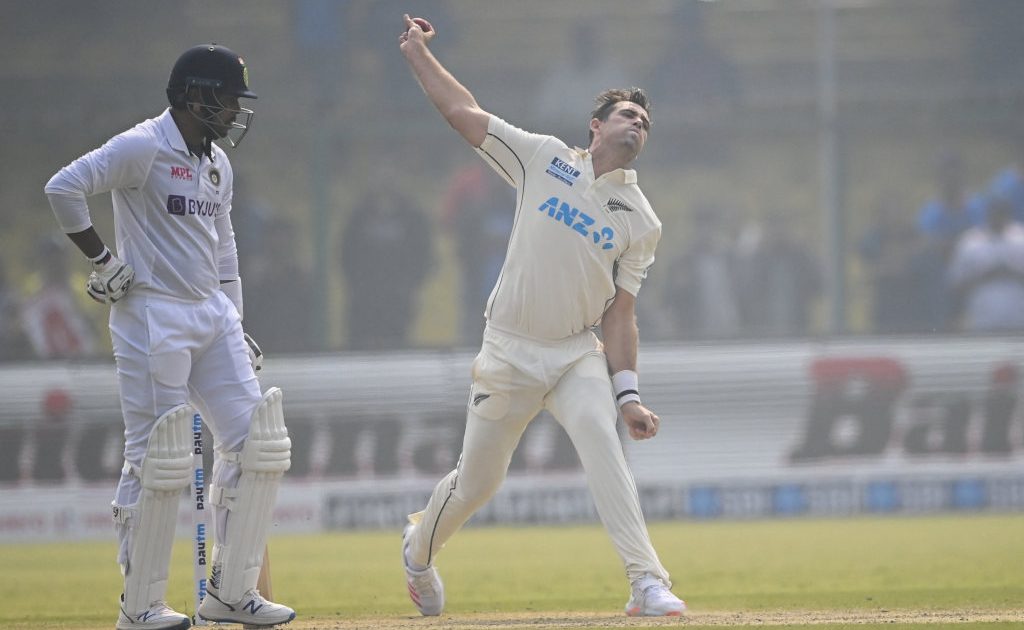 Starting the second day on 258-4 in their first innings in a smoggy Kanpur, all the Indian batsmen barring debutant Shreyas Iyer found Tim Southee a handful.

The 32-year-old bagged five for 69 in his first innings effort, four of those wickets coming in Friday’s morning session, getting New Zealand back into the game after Iyer had gone to his maiden Test century.

However, Latham and Young looked in control, rotating strike seemingly at will while aslo striking 16 fours between them to keep the scoreboard ticking over.

On day two, Latham would hit four fours in his 165-ball innings against Young’s 12 fours off 174 balls.

Latham, on 50, was given out caught behind off Ashwin in the penultimate over of the day before bad light stopped play, but was reprieved on review. That was his third successful DRS review of the innings.

Southee said that the opening pair had batted “exceptionally well” and the Black Caps will take it “session by session” on Saturday against a “quality” India attack.

Ashwin finished the day with 17 wicket-less overs for 38 runs. Jadeja bowled his 14 economical overs for 28 runs and Patel — the other left-arm spinner in the Indian team — was taken for 26 runs off his 10 overs.

The pace attack look to have relegated to a bit part as Sharma was taken out of the attack by Rahane only after six overs and Umesh bowled his 10 for 26 runs.

Southee puts the brakes on

Southee had halted the Indian advance in the first session on Friday when he bowled Ravindra Jadeja in his 12th delivery of the day for 50.

This broke Jadeja’s 121-run partnership with Iyer and sparked the Indian collapse.

Iyer looked fluent and picked up from his overnight score of 75 to hit two fours in the first over off Kyle Jamieson.

The new cap hit 13 fours and two sixes in his 171-ball innings of 105 before he was undone by Southee and caught by Young at cover to reduce India to 305-7.

Southee also removed Saha for one off 12 balls when he edged a delivery to Tom Blundell behind the stumps.

Patel too fell to Southee after edging a delivery to Blundell after scoring three off nine balls.

India went to lunch at 339-8 and lost the last two wickets immediately after the break, both to Ajaz Patel.

Ashwin was bowled by Patel for 38 off 56 balls and the spinner also claimed Ishant Sharma for zero.

New Zealand now trail India by 216 runs in the first innings, with the pitch expected to further aid Indian spinners on Saturday.