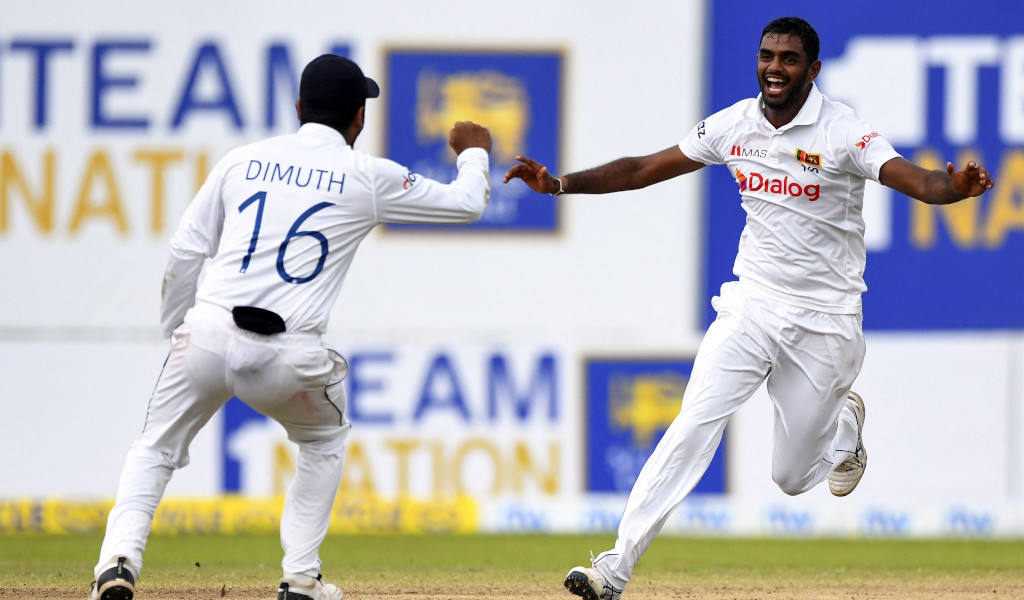 Sri Lanka spinner Lasith Embuldeniya took five wickets as the hosts thrashed the West Indies by 187 runs in the first Test in Galle on Thursday to go 1-0 up in the two-match series.

The West Indies were bowled out for 160 before tea on the final day having been set a stiff 348 to win, with Nkrumah Bonner playing the lone warrior with an unbeaten 68 on a turning wicket.

Bonner was one of only three Windies batters to make it into double figures, along with Joshua Da Silva, who made 54, and Rahkeem Cornwall, who got to 13.

Sri Lanka secured a match-defining 156-run first-innings lead thanks to a superb 147 by Dimuth Karunaratne and four wickets by Praveen Jayawickrama, helping to scuttle the visitors for 230.

With rain washing out some play and storm clouds threatening, Karunaratne top-score again in Sri Lanka’s second innings with 83, this time aided by Angelo Mathews, who made 69, to set the West Indies a mountainous task to win.

On day four, the hosts’ spinners made short work of the West Indies top order with the tourists losing four wickets in 15 balls and for just four runs.

Reeling on 52 for six at the start of the final day, the West Indies clung on with Bonner and Da Silva putting on 100, the West Indies’ highest partnership of the match.

Despite the wicket offering plenty of assistance, the two batsmen negated the Sri Lankan spin threat with clever footwork.

Three chances were also put down by Sri Lanka, with Pathum Nissanka the man suffering butterfingers.

The West Indies were in danger of being shot out for their lowest score in Test cricket when they slipped to 18 for six, but Bonner and Da Silva added some respectability to the scorecard.

In the end, the West Indies were able to surpass their lowest total of 47 all out suffered against England in Jamaica in 2004.

Sri Lanka would finally dismiss Da Silva 15 minutes before lunch when he was caught at slip by Dhananjaya de Silva to give Embuldeniya his third wicket in the innings. Da Silva’s 54 came off 129 balls and contained five fours.

Having moved to 41, Bonner was given out leg before wicket to Ramesh Mendis, but successfully reviewed the decision.

With Bonner there hope remained but the West Indies, chasing their first-ever Test win in Sri Lanka, collapsed after lunch.

Embuldeniya finished with a five-wicket haul while Mendis supported him aptly him well with four scalps.