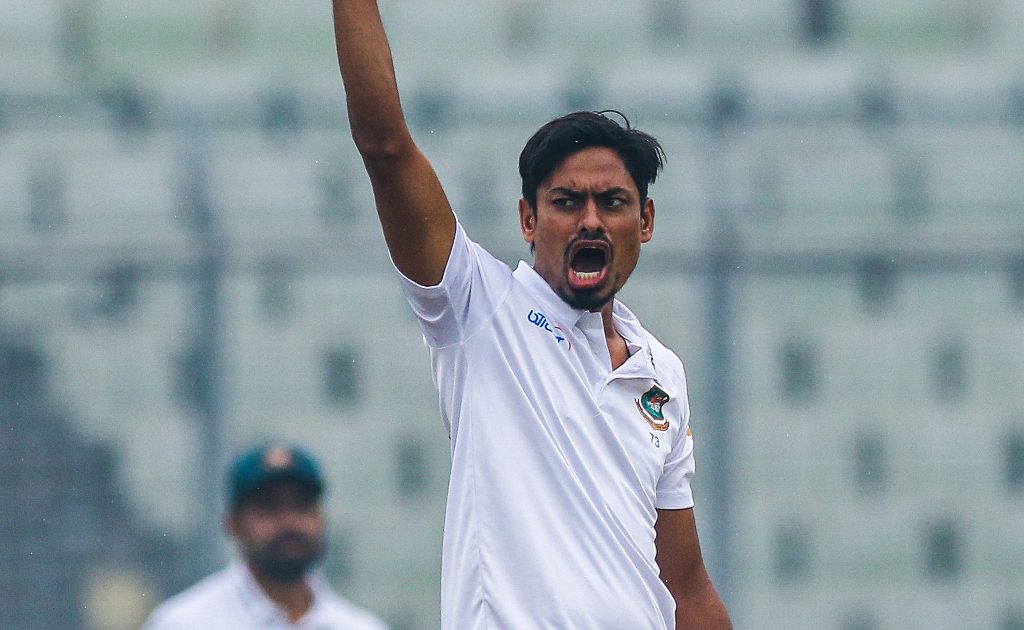 Bangladesh’s Taijul Islam claimed a five-wicket haul while Abid Ali scored a century for Pakistan as the first Test in Chittagong is finely poised at stumps on day three.

The hosts took a 44-run lead into the second innings after dismissing Pakistan for 286 just before tea, after some superb bowling by Taijul, who finished with figures of 7/116.

However, the visitors struck back through Shaheen Afridi (3/6), who took the wickets of Shadman Islam (one), Najmul Hossain (zero) and Saif Hasan (18) as Bangladesh finished the day on 39/4 at stumps.

Hasan Ali took the other wicket, getting captain Mominul Haque for a duck, while Mushfiqur Rahim (12) and debutant Yasir Ali (eight) were the unbeaten batsmen at stumps.

Earlier on the day, Ali scored a fine 133 and at times was the only one keeping Islam at bay.

But Faheem Ashraf added a brisk 38 late in the day to keep the visitors in contention.

Pakistan started the day on 145/0 and looked poised for a big total, but the hosts roared back into the game when Taijul trapped debutant Abdullah Shafique (52) in his first over.

Taijul then made it two in two when he got Azhar Ali in a similar fashion, albeit with the intervention of the third umpire.

Babar Azam was good enough to see off the hat-trick ball in Taijul’s next over, but the Pakistan skipper could only make 10 after his off-stump was uprooted by Mehidy Hassan.

Taijul grabbed his third when he removed Fawad Alam for eight following a caught-behind appeal which was initially turned down but this decision too was overruled.

After crossing the 100 mark, Ali started to live a charmed life and was dropped at slip on 113, and again at short-leg on 133.

However, the second reprieve didn’t prove costly for the hosts as Taijul got him leg-before two balls later.

He struck 12 fours and two sixes.

Ebadot Hossain (2/47) then got the wicket of Mohammad Rizwan.