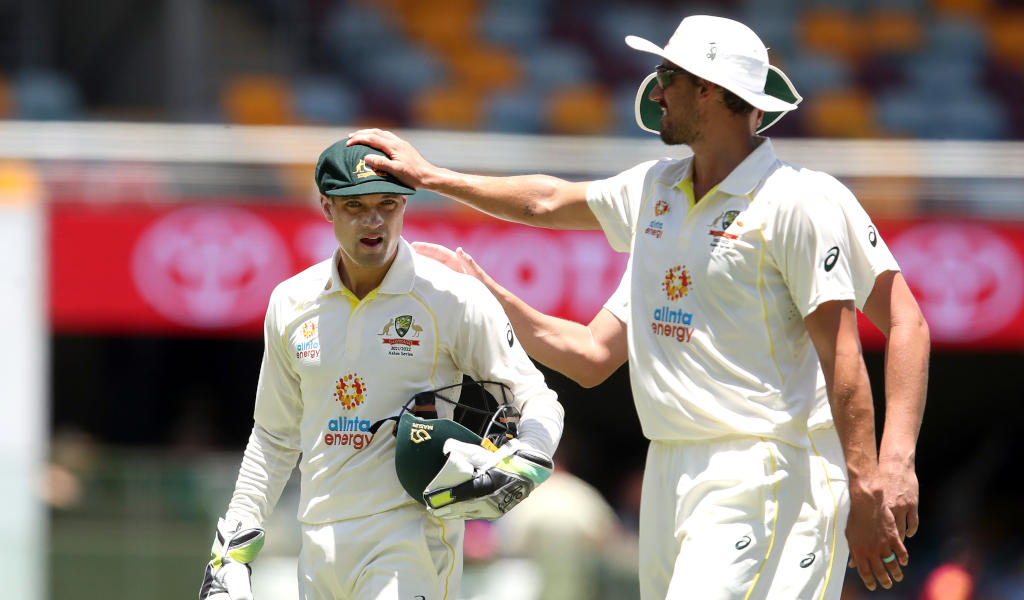 Alex Carey has been on the cusp of making his Test debut for some time having already established himself as the clear first choice glove man in the white-ball cricket.

He could have been forgiven for being a little overwhelmed by the occasion however given the events that thrust him into the role.

Carey has taken to Test cricket well enough, demonstrating all the skills he will need to make the position his own for the foreseeable future.

Tim Paine’s ignominious exit from the team had accelerated Carey’s ascension but it was a moment that the 30-year-old was well prepared for.

“I’ve got lots of confidence in my game,” Carey said reflecting on his debut in Brisbane. “I guess playing a little bit of white-ball cricket for Australia helps that. Once the bowler is running in, I focus on the ball and that is the same with the bat. Obviously your first Test you’ve got a bit going through your mind.

“It didn’t take me too long I guess to get into the rhythm. Probably a few overs and then we’re playing cricket again. It was great fun.”

Nathan Lyon happy with Alex Carey behind the stumps

In the build-up to the Test, concerns around Carey centred on how he would keep wicket to spin king Nathan Lyon, who went into the match chasing his 400th Test wicket.

Lyon gave Carey a passing grade and praised the work he has been putting in behind the scenes.

“I think it’s been an absolutely incredible debut,” Lyon said. “I’m not surprised by it. I’ve watched him train in the lead-up and his preparation has been world-class. He’s played obviously a lot of white-ball cricket for Australia and our relationship is only going to get bigger and better and stronger.

“He’s coming down on the early bus with me to catch in the nets. To debut at the Gabba in an Ashes series, take eight catches, [we’re] pretty proud of him.”

“Thought he was tremendous,” Cummins said. “Really clean against Lyno as well. Not surprised, he’s played a lot of international cricket and we knew he’d slot straight in and be high quality. Really happy for him. Also, putting his hand up when David Warner wasn’t going to open and saying, ‘I’ll open’ shows a lot of confidence to do whatever he can for the team.”