Home The Ashes The Ashes: Australia close in on 2-0 lead after Ben Stokes and Ollie Pope wickets

The Ashes: Australia close in on 2-0 lead after Ben Stokes and Ollie Pope wickets 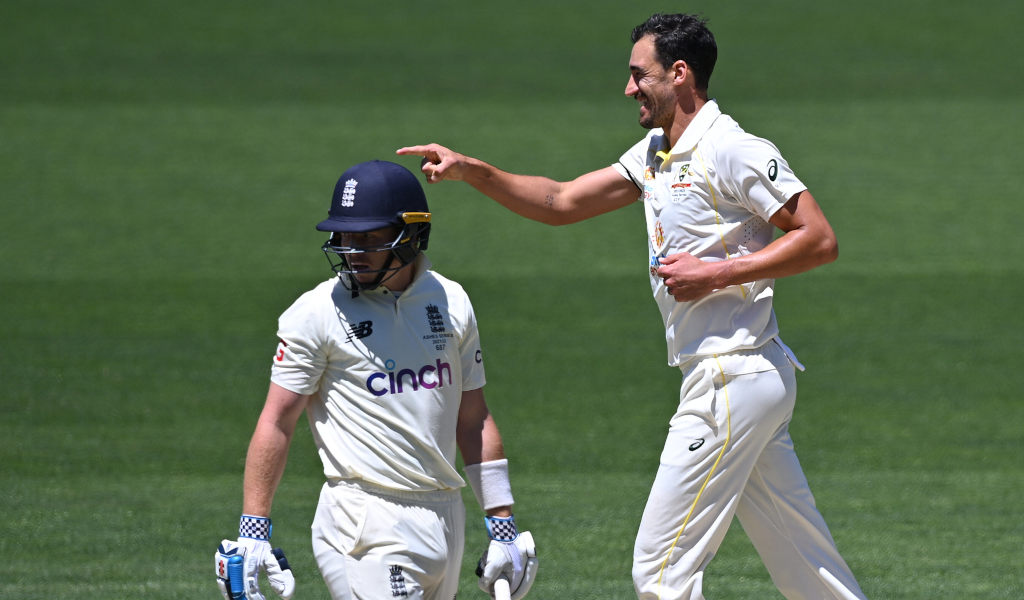 England were four wickets away from slipping 2-0 behind in the Ashes after Ben Stokes and Ollie Pope were unable to halt Australia’s fifth day charge in Adelaide.

The tourists have been fighting on the back foot for the entire match and arrived at the ground on Monday knowing they needed a monumental show of steel to turn their overnight position of 82 for four into an unlikely draw.

That looked even less likely at the first break, England 142 for six with Jos Buttler (16no) and Chris Woakes (28no) at the crease.

With Stokes at the coalface they would have held on to a slim thread of hope but, just as Joe Root’s dismissal off the final ball of day four underlined the home side’s ability to seize the big moments, so too did Pope’s early exit here.

Potentially playing for his place in the Boxing Day Test, the Surrey batter needed to show he could apply himself in adverse conditions and get on top of Nathan Lyon’s spin for an extended period of time following repeated struggles.

But he lasted just seven deliveries as Australia asserted their dominance almost immediately. Mitchell Starc, who has played a terrific hand carrying a seam attack deprived of the injured Josh Hazlewood and the isolating Pat Cummins, was responsible but Pope will surely be aware of his own culpability.

It was a good, testing delivery from the left-armer, who had just switched to go back over the wicket, but at a stage when batting long and leaving as many balls as possible was the order of the day it is hard to understand why Pope felt the urge to feel for one that started outside off stump and was shaping further away.

He trudged off with four runs to his name, courtesy of a nice but inconsequential flick into the on-side, and a Test batting average that had newly dipped beneath the 30 mark.

A hasty finish looked to be on the cards when Buttler replaced him in the middle and almost bagged his second duck of the match. Starc found the edge of the bat again but this time Australia’s typically excellent catching let them down. David Warner shuffled to one side to make room for an Alex Carey dive that never came, with the wicketkeeper entirely responsible as the ball skipped to third man for four.

England’s prospects of an extended rearguard lay heavily on Stokes’ shoulders and he adopted an ultra-defensive approach, blocking almost everything. That allowed Lyon to wheel away at one end, repeatedly asking the same questions in the expectation that a mistake would creep in.

Stokes had resisted for 77 balls and almost two hours overall but the error did come, hit on the pad as he retreated deep into his crease and was beaten by a fraction of turn. The lbw was waved away on the field but Australia’s suspicion that they were in business was upheld by three reds on the DRS review.

Buttler and Woakes added another 37 runs in 106 balls before the interval, soaking up the attention of the close catchers as Lyon came again and again and picking up a handful of boundaries as Smith kept attacking fields throughout.