Home The Ashes The Ashes in Hobart: England batting implodes again to leave Australia on top

The Ashes in Hobart: England batting implodes again to leave Australia on top 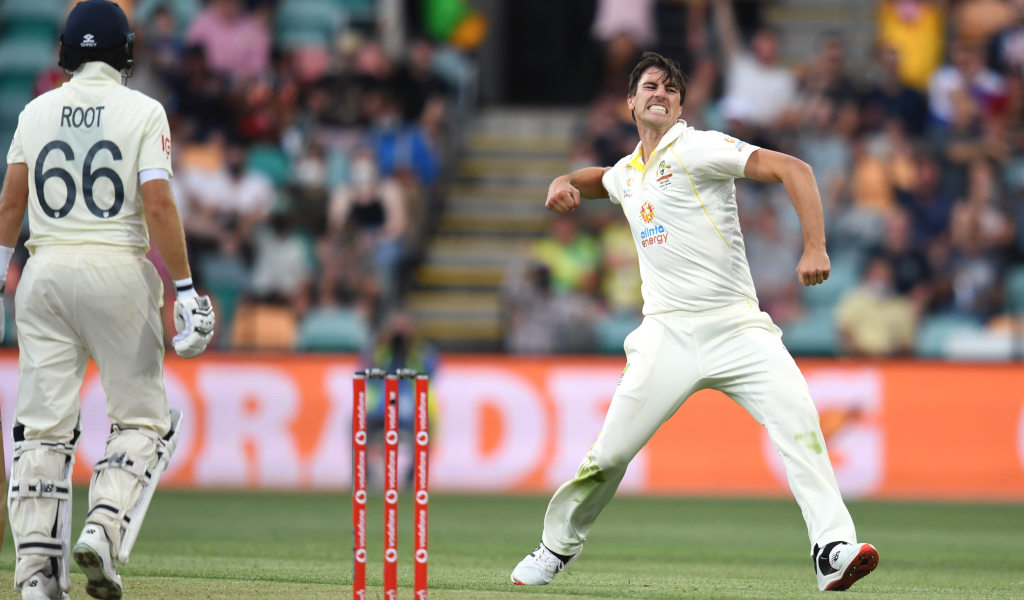 England’s batting imploded yet again in the final Test of the Ashes series, dragging down their chances of a morale-boosting win in painfully familiar fashion.

A total of 17 wickets fell as the game hurtled forward on day two of the floodlit clash in Hobart, with the touring attack competing well in two spirited sessions at the start and end of play.

But when England are at the crease, this contest teeters too close, too often to a mismatch. Having dismissed the hosts for 303 they turned in a weak-willed reply, rounded up for 188 all out.

It was the fifth time they have failed to reach 200 in nine attempts this series, this time taking less than 48 overs to expose their soft centre.

The bowlers rallied once again under night skies, reducing the hosts to 37 for three to continue the conveyor belt at the crease but a first-innings deficit of 115 could mean they are already too far gone.

The day began with Australia 241 for six and advancing quickly as England picked up the last four scalps for 62 in a ding-dong battle with the lower order.

Mark Wood was at the centre of the scrap, enjoying mixed rewards from a barrage of 90mph bouncers. His steady stream of short stuff was too much for Mitchell Starc and Pat Cummins, who both top-edged pulls to the boundary riders, but he found an unexpected nemesis in Nathan Lyon.

The number 10, not renowned for his ability to tame extreme pace, took up Wood’s challenge and proceeded to dump him into the grass bank for three sixes in quick succession.

He ended up with 31 as England failed to kill off the tail, rubbing salt into their wounds when he ticked off the visitors’ best score of the series (297 in the first Test).

England have endured the worst of the batting conditions on a number of occasions on tour but, with blue skies appearing for the first time in the match, and no demons in the pitch they had no cause for complaint here.

Instead they set about producing some self-inflicted wounds. First up was Rory Burns, taken out of the firing line two games ago and told to work on his technique only to be parachuted back in with Haseeb Hameed’s game in even greater disarray.

He looked ripe for the picking in Starc’s first over – which culminated in a thin edge that everybody missed – before a dodgy call from Zak Crawley left him scrambling. A moment’s hesitation from both men proved fatal, with Marnus Labuschagne throwing down the stumps from cover and Burns failing to produce the dive that might have spared him a duck.

Crawley had some making up to do but only got as far as 18 before springing Cummins’ short-leg trap. England have used three openers in three configurations in this series, barely making a dent along the way.

Things improved either side of the interval, with Joe Root and Dawid Malan working through some difficult moments to scratch out a stand of 49.

The pair shared two century stands earlier in the series but both look to be running on fumes at this point, Malan tickling Cummins down leg to fall for 25 and Root roundly beaten by his fellow captain on 34, pinned lbw by a big slice of seam movement with his feet stuck deep in the crease.

Root’s departure always gives the Australians a buzz and they quickly knocked off their next biggest target. Ben Stokes managed one streaky boundary before standing up tall and carving Starc low to point. Lyon was not called on to bowl a single over, but still got his name on the board with a smart fingertip catch that made it three big wickets in 21 balls.

By now England were relying on another recycled batter – Ollie Pope standing in for the injured Jonny Bairstow – and debutant Sam Billings to dig them out of a hole. Pope fared no better than before, caught behind for 14 pushing at the ball, but Billings gave a spirited account.

He made 24 of 29 runs in boundaries but was caught at fine leg looking for more of the same, swinging with too much enthusiasm and too little balance. Woakes was put down in the cordon on nought and five before nipping past Root to top score with 36, but Australia mopped up Broad and Wood with minimal resistance.

Thrust back into action after minimal rest, England’s workhorses got back to business and landed some handy blows.

Broad dismissed David Warner for the 14th time in Test cricket courtesy of a superb diving catch from Ollie Pope at point, condemning his old rival to a pair, before Billings picked up his first two dismissals.

Woakes had Labuschagne strangled off his hips and Wood removed Usman Khawaja with a brute of a ball that left him flailing, but Steve Smith and nightwatcher Boland held on for stumps with a lead of 152 secured.