Australia turn the screw on woeful England under lights in Adelaide 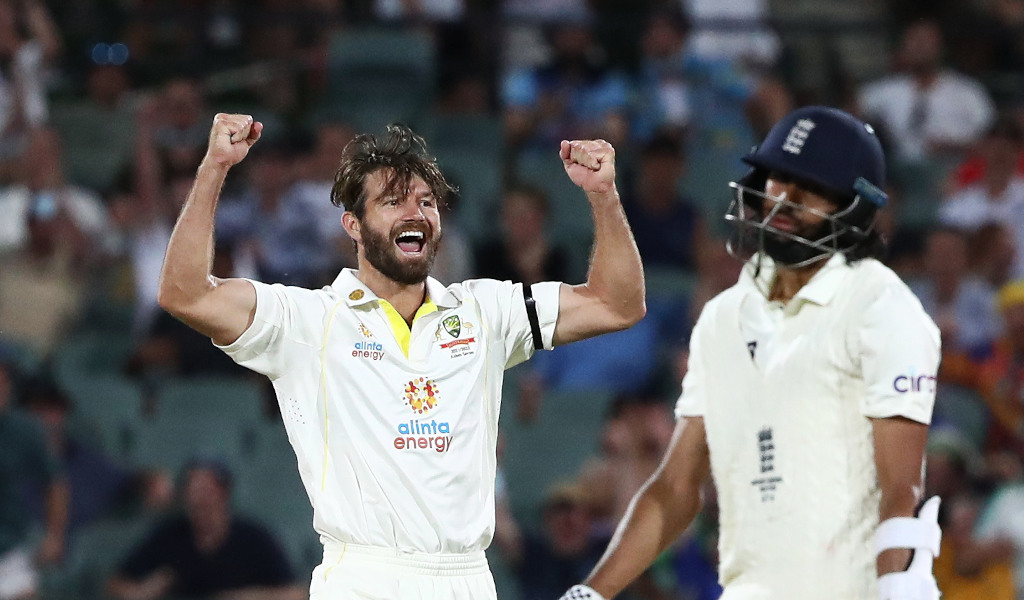 England endured a torrid second day in Adelaide as Australia bullied their bowlers and feasted on their openers to put themselves firmly on course for a 2-0 Ashes lead.

If the opening day of this day/night second Test was chastening, scraping together just two wickets in three full sessions, then what followed here was even worse.

There were bruising moments individually and collectively and the nagging sense that after just six days of cricket, this could be a tour that slides off the rails.

Australia declared on 473 for nine as England’s one-paced bowling attacked creaked through 150.4 overs, including a late flurry from the tail that damaged their pride even more than their prospects.

Gleefully taking the chance to put the tourists in under the bulbs, when the pink Kookaburra usually does it worst, they then wiped out the struggling Rory Burns and Haseeb Hameed for single-figure scores.

Several bolts of lightning lit up the night sky and sent the teams scurrying for the pavilion with England in trouble at 17 for two, a mercifully early end to a painful passage.

England were already in a hole at the start of the day, with Australia 221 for two and their two most durable batters – Marnus Labuschagne and Smith at the crease.

Conditions were stiflingly hot but the early omens were reasonably promising, with a much improved showing of three for 81 in the first couple of hours.

Labuschagne resumed on 95, twice reprieved by wicketkeeper Jos Buttler on day one, and soon had his sixth Test hundred courtesy of a thick edge to third man. Three of those have come in day/night matches, a format in which he is an early master.

Ollie Robinson should have had him for 102 but saw the breakthrough chalked off for a front-foot no-ball – an error in any circumstances but a particularly egregious one given Ben Stokes made exactly the same mistake to reprieve David Warner in Brisbane.

Robinson could have been rattled – particularly when he failed to take a half-chance off Stuart Broad at square leg – but a few minutes and one run later had Labuschagne lbw offering no stroke.

Smith held his end up with predictable surety, but England chipped away his next couple of partners with minimal damage. Travis Head, fresh from a match-winning 152 at The Gabba, got his footwork in a tangle and was bowled by Root for 18 and Stokes briefly abandoned his bouncer policy to clean bowl fellow all-rounder Cameron Green for two.

From 302 for five there was a slim chance of a fightback but England’s day was about to nosedive. Smith had ticked along to 56 by the break and when Alex Carey offered him a fluent foil from number seven, the pair dragged the game away with a partnership of 91.

England’s bowlers were flagging with every over, with discipline draining by the minute. Smith sensed weakness and kicked things up a notch, lining up Chris Woakes for a steepling six over long leg.

A couple of edges died in front of the cordon and then the cracks really showed, substitute fielder Zak Crawley coughing up a freebie with a wild throw and Burns turning a Smith single into a five as he hurled the ball over the ropes.

Anderson dismissed both batters before the interval, sparing English fans the sight of a 12th Ashes hundred for Smith when he pinned him lbw for 93 and then persuading Carey to chip to cover. The muted celebrations said it all, though.

England’s attack was running on empty and the humiliation was about to come. The first 10 overs of the night-time session was a debacle, with the Australian tail piling on another 83 runs.

Mitchell Starc crashed 39 not out at a run-a-ball, Michael Neser treated Woakes like a net bowler as he flogged him over point for six and both Ollie Pope and Stokes added to England’s growing tally of drops, albeit from tough chances. At one stage England posted eight fielders on the ropes and still failed to stem the flow of boundaries.

Woakes looked visibly demoralised as he served up a steady diet of ‘gimme’ deliveries, ended only when Jyhe Richardson followed a monstrous six by holing out and hastening the declaration. He is unlikely to be seen again for the Boxing Day Test, a fate that Burns may also suffer.

Following a nightmare first Test he needed a show of resilience but was treated as easy pickings by his tormentor, Starc. Feeling for contact off his third ball he sent a chunk edge straight to Smith at second slip to exit the stage for four. He may have just one more innings to save his skin.

Hameed fared little better, handing debutant Neser a first wicket with a soft-handed scoop to mid-on with just three to his name. It was an improbably meek departure and exposed captain Joe Root early. He edged his second ball just in front of the slips as Neser roared in but the weather spared any further drama.