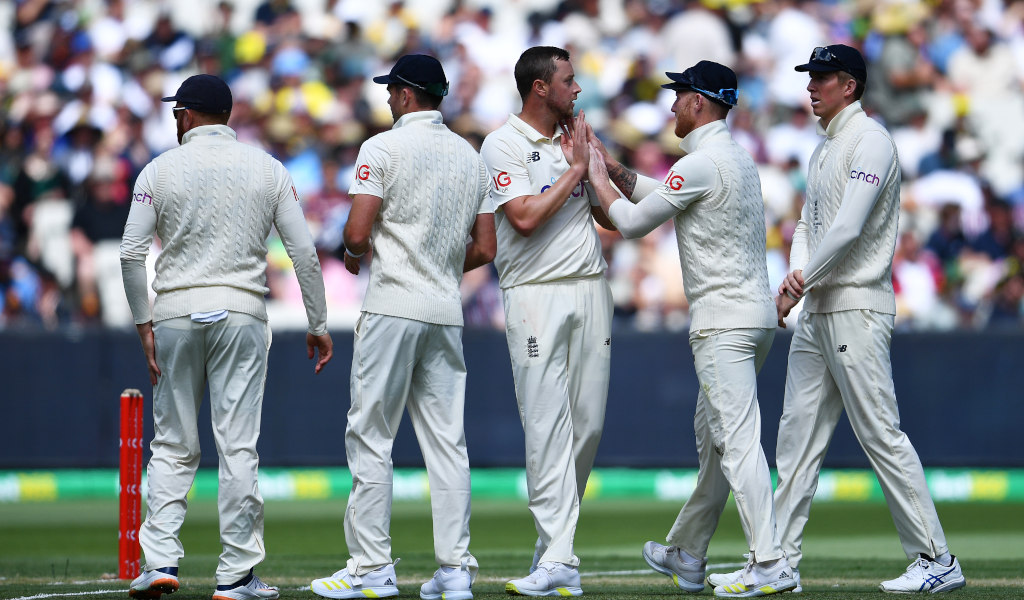 England’s bowlers brushed off a chaotic morning of Covid scares to hit back with three Australian wickets on day two of the Boxing Day Ashes Test.

Ollie Robinson, Mark Wood and James Anderson all made breakthroughs at the MCG as they kept the hosts to 131 for four defending their own underpowered total of 185.

For once it was Marcus Harris causing England the most problems, with the under-pressure opener unbeaten on 48 at the lunch break.

Play was delayed by half-an-hour when it emerged that four of the wider touring party – two from the backroom staff and two family members – returned positive rapid antigen tests, delaying England’s arrival.

The game was given the green light to continue after the England playing XI all tested negative to provide some cause for good cheer after a dreadful opening day in Melbourne.

Australia resumed on 61 for one, with Harris and nightwatch Nathan Lyon adding 15 to their total before the tailender’s impatience cost him. He aimed a booming drive at Robinson and sent a thick edge through to wicketkeeper Jos Buttler to get the tourists on the board.

That brought Marnus Labuschagne to the crease, fresh from unseating England captain Joe Root as the world’s number one batter. His chances of holding the top spot took a dent when he fell for one, nicking a rapid delivery from the energetic Wood before Root pouched the catch at first slip.

England have struggled to keep a leash on Labuschagne in the past two series and were visibly thrilled to see the back of him.

Steve Smith is another painfully familiar foe, who has averaged over 100 in the previous two Ashes series, but he also found the bowling attack uncomfortable. He had just five to his name when he inside edged Anderson into his pad, leaving Buttler with a fiendishly difficult leg-side catch that he was unable to take.

England must have had their hearts in their mouths given Smith’s record against them, but Anderson continued to cause him problems and got his man for 16 – nipping one in off the seam and drawing the drag-on.

The 39-year-old was exemplary through the middle of the session, conceding just one run in six overs of precise work. At the other end Ben Stokes thought he had Harris lbw for 36, but the opener was saved by a sliver of bat and a judicious call for DRS.

Harris approached what would be a first half-century since January 2019 but could not get over the line before lunch, while Travis Head was given a gentle welcome in a tired one-over spell from Robinson.