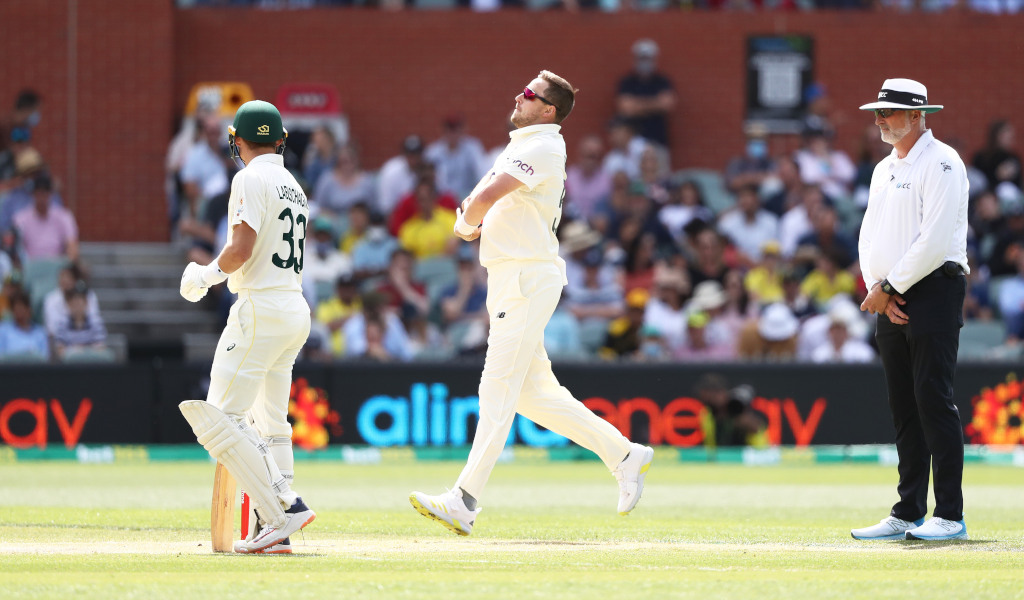 England endured a rollercoaster start to the fourth day of the second Ashes Test, with three wickets, another drop for Jos Buttler and an injury scare for captain Joe Root as Australia’s lead reached 371 in Adelaide.

Root was facing throw downs from spin coach Jeetan Patel during the warm-ups and was not wearing a protective box when a ball jumped unexpectedly and struck him in the groin area. He was sent for a scan at a local hospital to leave Ben Stokes in charge of the team, but returned midway through the first session to ease concerns.

Despite an overbearing match situation, Australia resuming 282 ahead on 45 for one, England made positive inroads while Root recovered from his painful blow. They started the session by taking three for 10, before Marnus Labuschagne and Travis Head reasserted the home side’s control to reach 134 for four at the break.

Things started chaotically with nightwatch Michael Neser almost run out off the first ball of the day then bowled by a prodigious nip-backer from James Anderson.

England’s run of success against out-of-form opener Marcus Harris continued, with Stuart Broad pushing one up at a full length and clipping the outside edge as the ball shaped away. Buttler reacted instinctively, throwing himself towards first slip to take a wonderful catch.

Having dropped Labuschagne twice on his way to a century in the first innings, it was a moment of redemption for the England wicketkeeper but lasted just a few short moments.

Broad found the edge of key man Steve Smith with the very next ball, picking up another nick only for Buttler to go one-handed at it again and spill the chance. The pink Kookaburra has followed him mercilessly in this match and despite good moments, the errors have proved too frequent.

Broad was desperately close to getting Smith with his follow-up delivery, a wonderfully judged poser homing in on off stump when it clipped the front pad. Umpire Rod Tucker was unmoved by Broad’s explosive celebrations and England were denied by DRS by the thinnest of margins.

Smith is a familiar irritant in this contest, boasting 11 Ashes centuries and averaging over 100 in each of the last two series. But he did not make the most of his good fortune here, managing six before brushing Ollie Robinson off his hip to leave Buttler another hugely tricky chance.

In keeping with his unpredictable, up-and-down match, he held on. With Jack Leach not picked and Root yet to emerge, England then sprung a huge surprise by asking Robinson to hustle through a couple of overs of off-spin.

The 6ft 6in seamer has experimented with tweakers in county cricket over the years but it was impossible to avoid the conclusion that this was a truly bizarre chapter in a game that has seen England’s long held plans stretched to breaking point.

Labuschagne and Head squashed the fightback with a spell of controlled aggression that England, and the returning Root, could not control as Chris Woakes and Stokes both struggled.

They put on an unbroken 70 in 93 balls, re-establishing the pattern of Australia’s dominance.