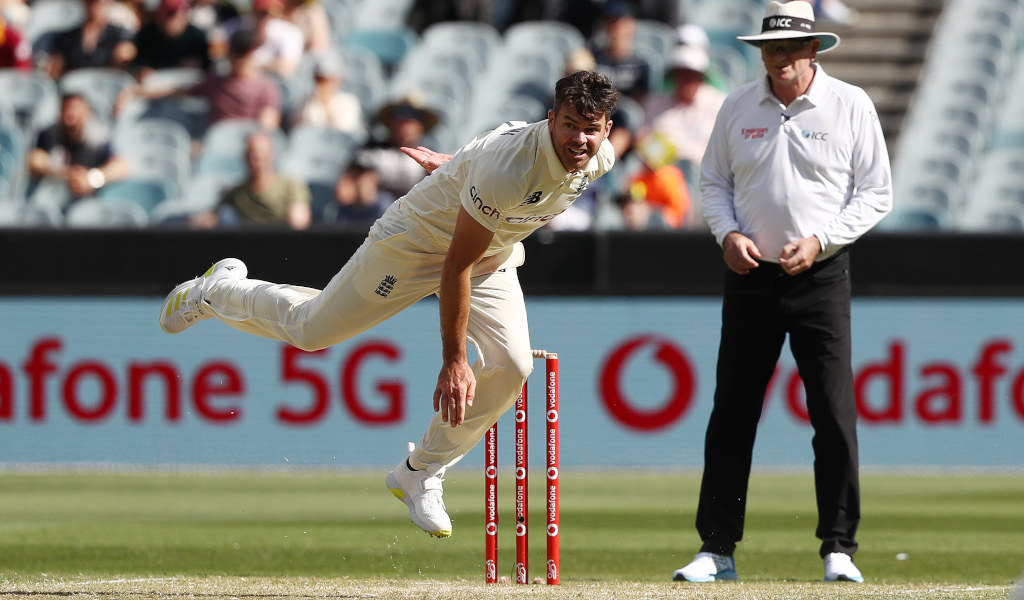 James Anderson led the way as England’s bowlers brushed off the chaos of a Covid scare to give England a foothold on day two of the Boxing Day Ashes Test.

Australia’s tea score of 200 for six was still enough for a lead of 15 but that was down to desperate batting in the first innings – a debacle the seamers were busily trying to make amends for with five wickets in two sessions.

Anderson showed off his class, stemming the flow of runs and dismissing Steve Smith and Marcus Harris to record figures of three for 24 from 19 overs, with strong support from Mark Wood and two breakthroughs for Ollie Robinson.

The day’s play had earlier been plunged into doubt by the presence of coronavirus in the England camp.

The start was delayed when it emerged that four of the wider touring party – two from the backroom staff and two family members – returned positive rapid antigen tests on Monday morning, but a round of negative results from the playing XI meant the start was pushed back by only half-an-hour.

England would have been more than happy with their morning’s work, taking three for 70 and picking off some of their most painfully familiar foes without sustaining any real damage.

With 15 runs added to the overnight total of 61 for one, nightwatch Nathan Lyon was first to go courtesy of a wild and woolly drive at Robinson.

That brought Marnus Labuschagne to the crease, fresh from unseating England captain Joe Root as the world’s number one batter. His chances of holding the top spot took a dent when he fell for one, nicking his first ball from Wood – a rapid welcomer in a tricky channel – straight to Root.

Steve Smith is another frequent tormentor of English attacks, averaging over 100 in the previous two Ashes series, but he also fell cheaply for 16. He offered up a tough chance on five when an inside edge into his pad would not stick in the glove of the diving Jos Buttler and England must have feared the worst.

But Anderson wad in the midst of a wonderfully controlled spell that saw him allow one run in six overs and he continued asking the hard questions until Smith dragged on and flicked his own bails.

At the other end Ben Stokes thought he had the fortunate Harris lbw for 36, but the opener was saved by a sliver of bat and a judicious call for DRS.

Harris never seemed fully secure at the crease, playing and missing with remarkable regularity either side of recording his first half-century at this level since January 2019. England lost momentum during an extended spell from spinner Jack Leach, during which he bowled a negative line into the pads with the support of a defensive field.

Harris and Travis Head formed a stand of 60 but showed signs of uncertainty after Leach tried some more attacking angles. Head survived a top-edged sweep into space, while Head failed to make contact on the charge only for Buttler to let an admittedly tricky stumping slip past his gloves.

Robinson, who looked low on gas at times, finally got England going again when he drew a rash swing of the bat from Head (27) and fed Root his second catch of the day. Harris become number three, gone for strangely unconvincing 76, when he found Anderson too testing and nudged a thick edge through to the skipper at first slip.

Wood gave one more blast of pace before the tea break, thumping Cameron Green on the glove with a spitting delivery that bounced short of Haseeb Hameed at point. Green and Alex Carey plotted a course for the interval and made it to 200 just before it came, courtesy of the former’s controlled edge to third man.

Another couple of quick wickets in the evening would leave England with a realistic route back into the conversation but Australia’s current pair and their strong tail looked unlikely to buckle easily.