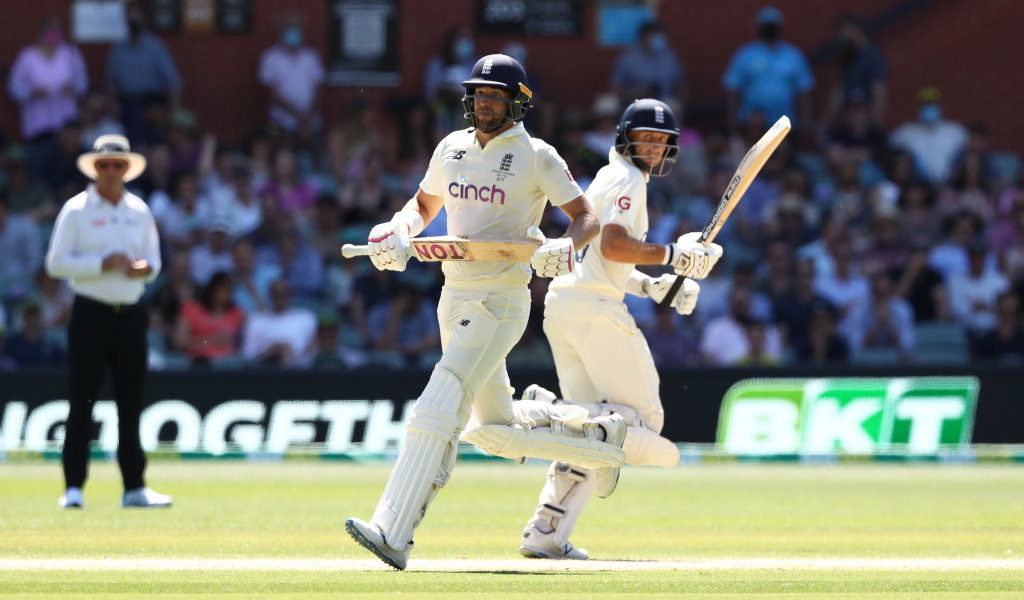 Joe Root and Dawid Malan shared their second century stand of the Ashes, batting serenely on the third afternoon in Adelaide to make England’s first steps on a long road back in the second Test.

The tourists were run ragged on day two, unable to prevent Australia running up 473 for nine declared and then losing both openers for single-figure scores under the floodlights as the hosts played the day/night conditions perfectly.

But after resuming on 17 for two, Root and Malan batted with positivity and purpose in an elongated first session as they took the score to 140 without further loss.

The third-wicket pair also gave England their only real moment of optimism in the Brisbane Test with a second-innings partnership worth 162. That ultimately proved a false dawn as the rest of the team collapsed in defeat, and they will know there is plenty more to do to avert a repeat.

Root will be particularly desperate to convert his 57 not out into a first century Down Under, having passed fifty on seven previous occasions, while Malan has 68no and the experience of an Ashes ton in Perth four years ago to work with.

Malan did not start easily, beaten on the outside edge by Michael Neser’s first ball of the morning, then nicking Jhye Richardson past his stumps with just one to his name.

Root was secure from the off, opening his boundary account with a trademark steer through backward point as he began another day of shouldering English hopes. Three fours in four deliveries got Malan well into the contest, with a clinical straight drive and two flashes behind square off Mitchell Starc.

When the left-arm quick bounced him with a vicious bumper, Malan arched his back and bent his knees to get out of the way with a graceful evasion. The arrival of Nathan Lyon’s spin changed the dynamic, with a couple of risky moments in his second over.

Malan drove uppishly on 33 but was grateful to see the ball strike Marnus Labuschagne in the midriff and land safe. Root then top-edged a sweep short of the boundary rider on 19. Had England’s luck been out, either may have gone to hand.

Malan was outscoring Root, a relief for the skipper given the weight of expectation he has carried in recent times. Australia gave a sense of growing concern when they wasted a DRS review trying to nip out Root for 34 with an optimistic shout from Neser.

The ball started hitting the middle of both bats as Australia failed to generate chances or cap the scoring, with England ticking by a handful of psychologically useful landmarks. Malan was first to a half-century in 86 balls, with Root following in 91, and the hundred stand was not far behind.

All the while Root was moving further up the all-time list of run-scorers in a calendar year, becoming just the fourth player in history to pass 1,600. He chalked off Indian greats Sunil Gavaskar and Sachin Tendulkar and then passed Australia’s highest scorer, Michael Clarke, just before the interval.