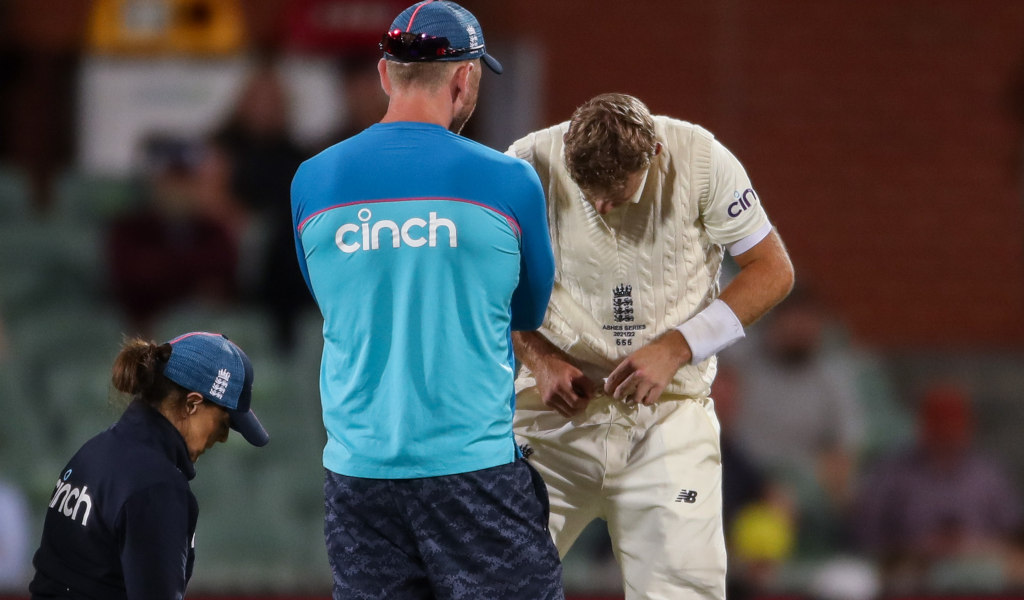 Joe Root was hailed for his bravery and determination in leading England’s attempts to salvage a draw from the second Ashes Test, but bowling coach Jon Lewis admitted his last-gasp dismissal was a huge setback.

Captain Root had a horrendous day on duty in Adelaide, starting with a trip to a local hospital after taking a blow to the groin during the warm-ups and ending when he nicked the final delivery of the day to leave Australia in complete control.

With the tourists on 82 for four and 386 behind, there seems no way out but Ben Stokes’ presence at the crease at least conjures happier memories of implausible rescue missions.

Root’s pride will not be the only thing that is bruised, with his late dismissal coming shortly after he was clattered in the box at 85mph by Mitchell Starc, aggravating his earlier injury in the worst way imaginable and leaving him doubled in agony for several minutes.

It was a darkly comic chain of events given the importance of this series to Root’s captaincy and Lewis was full of admiration for the way he committed to face down the pace and hostility of Starc despite his clear physical discomfort.

“There was no doubt in Joe’s mind that he was batting, he’s the captain of England,” said Lewis.

“He wanted to go out there to bat, to show people what a great player he is and what a great leader. It’s painful, he was hit there this morning, had to go off to hospital for a scan and wasn’t in great shape.

“But Joe’s a strong leader, he showed a hell of a lot of character to get out there and fight because I know he was pretty sore. When he was hit again he could easily have walked off and had a nightwatchman come in.

“But to stay out there? That’s the character of the man and what it means to him to be England captain. He wants to show how hard he wants to fight, and how hard he’s prepared to fight to get back into the game.”

Amidst those warm words there was room for regret too, with the realisation that his late outside edge just four balls before stumps could have settled the result.

“Any time one of your best players gets out, the team takes a bit of a knock. It’s a big, big ask but we will put the effort in and fight,” said Lewis.

“What you have to understand and believe is that the rest of the guys will fight as hard as Joe would to to survive the game and get out with a draw.

“We’ve seen it before from Ben, who’s done some really special things in an England shirt.

“I know he’s just the same as Joe and he will be fighting as hard as he can. The boys are coming up a bit short at the moment but we have another chance to show what we can do.”