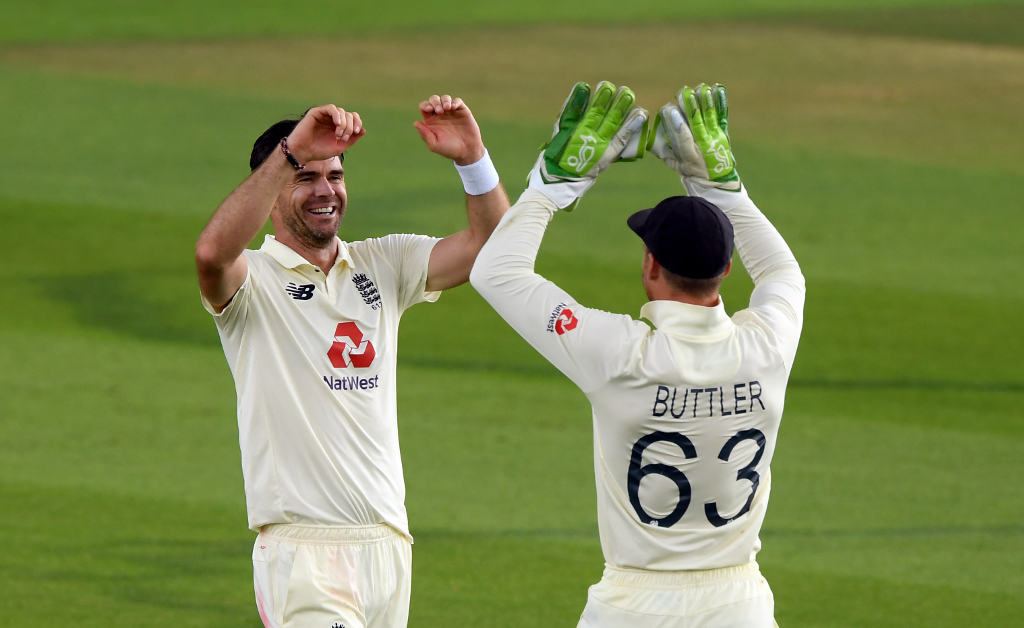 Jos Buttler backed James Anderson to play a big role in the Ashes – and beyond – despite England’s decision to stand their record wicket-taker down from the first Test as a fitness precaution.

Although passed fit Anderson was absent from the tourists’ 12-man squad for the curtain-raiser at the Gabba and will spend the next five days fine-tuning his skills in the nets while the two old rivals look to get the best of each other, and a dodgy weather forecast, in Brisbane.

Elsewhere head coach Chris Silverwood and captain Joe Root have thrown their faith behind Surrey’s Ollie Pope, handing him the number five slot ahead of the more experienced Jonny Bairstow, and will make a late call on whether or not to include spinner Jack Leach.

If they do decide they need the slow left-armer’s variety, Anderson’s long-term new ball partner Stuart Broad could join him on the sidelines, leaving over a thousand Test wickets in the dressing room.

The decision to shelve Anderson, the most prolific seamer in history, was met with surprise in Australia but with five Tests squeezed into the next six weeks the veteran was always unlikely to be an ever-present.

Instead, he is gearing towards the next game – a day/night clash in Adelaide where England hope he can make the pink Kookaburra talk under lights.

Memories of the 2019 Ashes – when he broke down on the first morning and was not seen again – also played their part. But Buttler made it clear that Anderson was still going to be a big factor Down Under and is not giving any indication that his long and illustrious career is winding down.

“Jimmy’s not going to play but he is fit. It’s just precautionary,” he said.

“It’s obviously a very long series and we want a guy like that to be available to play as much of a part as possible. Jimmy’s been bowling and bowling well – I faced him in the nets that’s been a great challenge going into a Test match.

“It seems that age is just a number for Jimmy at the minute. He’s in fantastic shape, his skills are brilliant as always and he still seems to be trying to improve and learn new things.

“That hunger doesn’t seem to be wavering at all, he still gets just as grumpy if he bowls a bad ball and his competitiveness is incredibly high in anything he does, let alone on a cricket field. I certainly see him wanting to continue as long as he can and there doesn’t feel like there’s anything in the way of him doing that at the moment.”

The decision to back Pope over Bairstow is also significant. The latter has experience of playing Ashes cricket away from home, as well as a fine century in Perth to look back on from 2017, but has had an indifferent 2021 since his Test recall.

Pope also knows he is overdue a down payment on his undeniable potential – an average of 32.16 representing a modest return from his first 20 caps – but he has caught the eye in practice and now has a big opportunity to shine.

Incongruously, Buttler is also preparing to make his first Ashes appearance on Australian soil, more than 10 years on from his international debut.

He was still typecast as a limited-overs specialist during England’s last Test visit to these shores and has found the tag hard to shed, despite racking up 53 caps in the five-day format and enjoying two spells as vice-captain.

“For any English player, to come and tour Australia in the Ashes is certainly on your bucket list,” he said.

“I remember coming here on a Lions tour in 2013 and I went to watch a few of the days of the Test here in Brisbane. When you see it up close you understand the intensity and hostility of this environment.

“I’m incredibly excited about the challenge. It’s going to be incredibly tough but that’s kind of what you want to play the game for. I’ll throw myself into it as much as I can and I know I need to be near my best to be successful.”