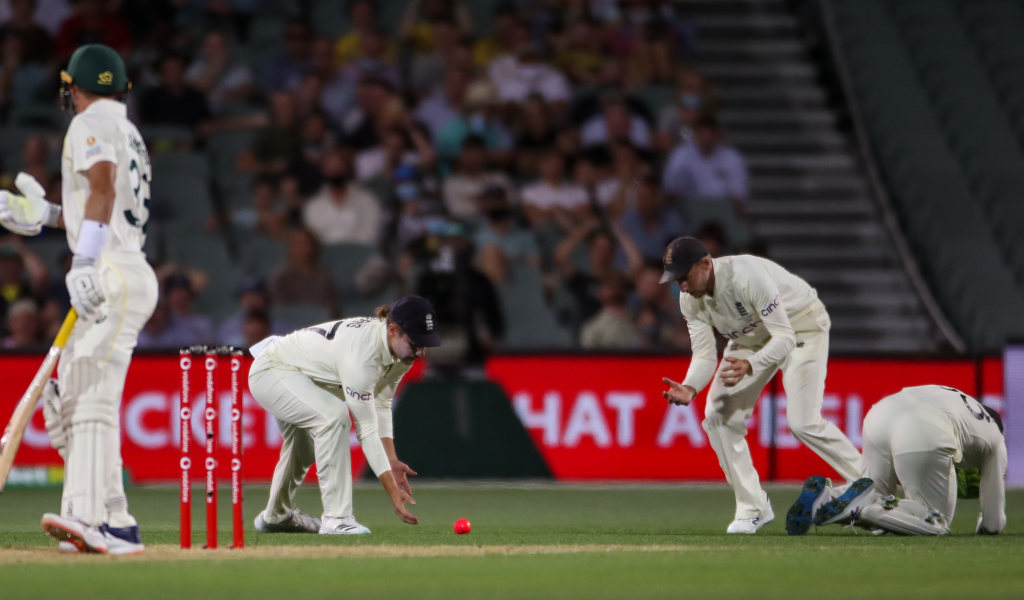 England’s Ashes hopes sustained another painful blow in Adelaide as they mustered just two wickets on day one of the second Test, with Jos Buttler in the spotlight after putting down a pair of costly catches.

The tourists desperately needed to summon a fightback in the floodlit day-night clash after their nine-wicket defeat at The Gabba, but were ground down to tune of 221 for two by Australia.

Marnus Labuschagne was far from his best but still chalked up 95 not out and David Warner came through a pedestrian depart for the same score. Just as they had four years ago, England relied on a battery of right-arm seamers and came up short, with their attack missing the potent pace of the rested Mark Wood and the left-arm spin of the axed Jack Leach.

The kind of carnage that can sometimes unfold when during the ‘twilight’ period simply never materialised and it will already take a considerable shift in fortunes to drag the home side back from their position of strength.

Buttler, in particular, will want to banish all memories of the match after fumbling Labuschagne down the leg side on 21 then conjuring a barely believable drop when he was five short of his century. After almost 85 overs of toil, James Anderson finally fashioned England’s first genuine edge only for Buttler to spill the simplest imaginable take.

The tourists must have felt like luck was on their side when a Covid alert ruled Australia captain Pat Cummins out of the game at a few hours’ notice, but they were denied the chance to pressurise the rejigged bowling line-up when Joe Root lost the toss.

Steve Smith, back in charge for the first time since the sandpaper scandal, opted to bat first against the returning duo of Anderson and Stuart Broad.

Broad joined his new ball partner as one of just 10 players to win 150 Test caps and soon began making his mark on the series after being omitted in Brisbane last week. His old rivalry with Warner was soon in the spotlight and Broad was dangerously close to reprising his 2019 dominance of the left-hander with his very first ball.

Offering no shot to one that tailed in from round the wicket, Warner was thumped on the front pad but survived a long lbw shout. That was the start of a fiendishly difficult period for the opener, whose first hour at the crease contained just one run and two more big lbw appeals. Broad had him in trouble for a second time on nought but missed out on height, while England burned a second DRS referral on Chris Woakes.

Broad and Anderson kept the scoring rate down to a snail’s pace despite minimal swing, but it took a rare loose one to get them on the board. Marcus Harris went after a drag down, brushing it down the leg side where Buttler threw himself into a brilliant one-handed catch. Things would only get worse for the wicketkeeper.

At drinks Australia had crawled to 15 for one, but both batters were banking valuable time in the middle. By lunch they had moved to 45, with Labuschagne almost sending England in happy when he flashed Ben Stokes in between through the slip cordon.

The evening session drained English optimism, with 84 runs, one dropped catch and a steady flow of boundaries as Warner finally began making hay after his slow start.

Labuschagne pulled one a few inches over the man at square leg to break a long scoreless streak then fended Stokes off his hips in the direction of Buttler. It was a much simpler chance than the one he had clung on to off Harris, but he juggled it to the floor for what would prove a costly miss.

Root summed up the mood with a rueful pat on the back from slip while Warner poured salt on Stokes’ wounds with a pair of muscular blows for four to reach his half-century. Root came close to helping his side out of a hole, Labuschagne flirting with a leg-slip catch on 45 and Warner almost playing on for 61. Instead, England reached the interval relying on the floodlights at 129 for one.

The night’s play began with an Australia acceleration, Labuschagne smashing an Anderson long hop to the ropes as the 39-year-old hoofed the turf in frustration before he and Warner went after Stokes.

For the second game in a row Warner gave away a century, following his 94 at Brisbane with 95 as he pounded a wide, woolly delivery from Stokes straight to Broad at point.

Even at 176 for two, Smith’s arrival as the natural light faded offered some hope. But that gradually dissipated as England laboured away. In the best bowling conditions yet Stokes stayed on too long hammering out the ‘enforcer’ role, causing only infrequent inconvenience, and the sight of Root rushing through another spell of off-breaks as Broad and Anderson waited for the new ball was troubling on several levels.

Eventually, England unwrapped the fresh Kookaburra but by then Smith had acclimatised and Labuschagne was within touching distance of a battling ton. Buttler’s wince-inducing drop starved the tourists of late celebration, with a 32,000 crowd whooping in delight as the big screen replayed his pain.