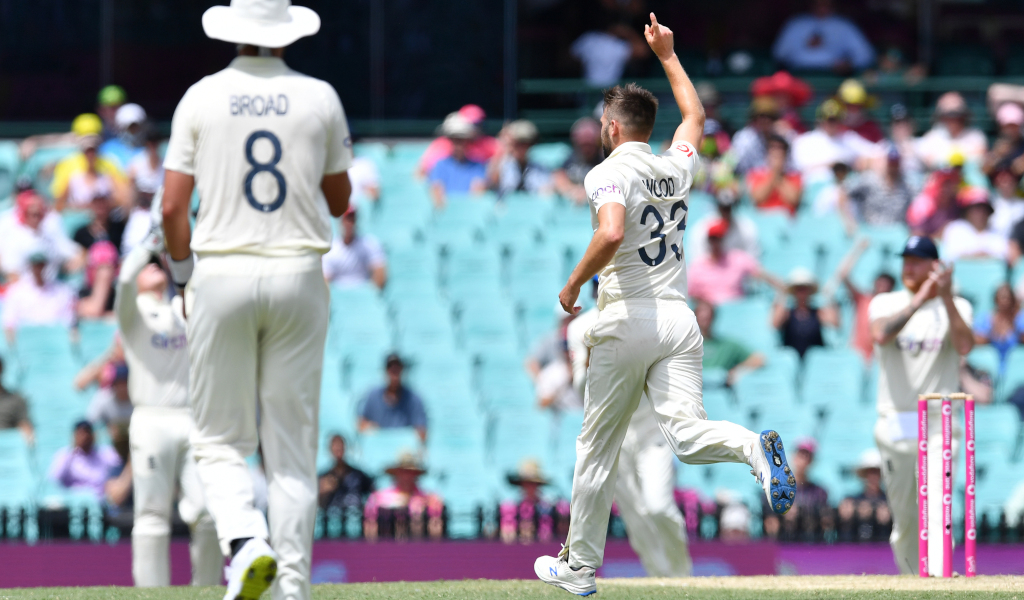 Mark Wood and substitute wicketkeeper Ollie Pope did their best to keep England alive in the fourth Ashes Test in Sydney, but Australia swelled their lead to 271 on the fourth afternoon.

The tourists were bowled out for 294 in the morning session, a deficit of 158, leaving Australia holding all the cards despite a gutsy Jonny Bairstow century.

England’s task was made even tougher with the news that first-choice gloveman Jos Buttler (left index finger) and fellow keeper Jonny Bairstow (right thumb) were both awaiting the results of X-rays and would not take the field.

That left Pope to answer an emergency call to stand-in behind the stumps – a role he performed admirably as he picked up three catches before tea.

One of those came as Wood found the edge of the world’s number one batter Marnus Labuschagne for the third innings in a row – continuing his extended spell of success against the prolific right-hander.

But Australia were still able to reach 149 for four – guaranteeing an England side who have yet to reach 300 all series a formidable chase.

Surrey batter Pope was dropped after poor games with the bat, but stepped up into a role he has only performed on a handful of occasions – including once in a Test, when Buttler was hurt in New Zealand.

He held on safely when Wood found David Warner’s outside edge in the sixth innings of the reply, sending the left-hander packing for three. His second dismissal took a little more nous, Marcus Harris nicking a drive off Jack Leach to leave a tough chance.

But Pope stayed low and reacted well enough for a specialist to nod in approval. But the scale of the lead meant England needed things to continue in the same direction.

Both of Australia’s most bankable run-scorers failed to make a serious dent, Labuschagne once more allowing Wood’s pace to get under his skin. He has struggled for timing against the Durham quick and when he looked to swipe a ball that seamed in from a wide position, he fizzed a thick edge through to Pope for 29.

Steve Smith added 23, including a glorious hook off his nose for six from a Wood bouncer, but he made a rare error and lost his middle stump by Leach.

To English frustration first-innings centurion Usman Khawaja continued his prior good form, pulling gracefully as he led the less secure Cameron Green in a stand of 63 up to the end of the session.

Earlier, Scott Boland had continued his dream start to life in Test cricket. He picked up Bairstow for 113 and finished England’s innings with a top-edge from Stuart Broad, wrapping up figures of four for 36.

Kent captain Sam Billings was en route to join the squad ahead of the series finale in Hobart, with Ben Stokes (side) joining Bairstow and Buttler on the walking wounded list.