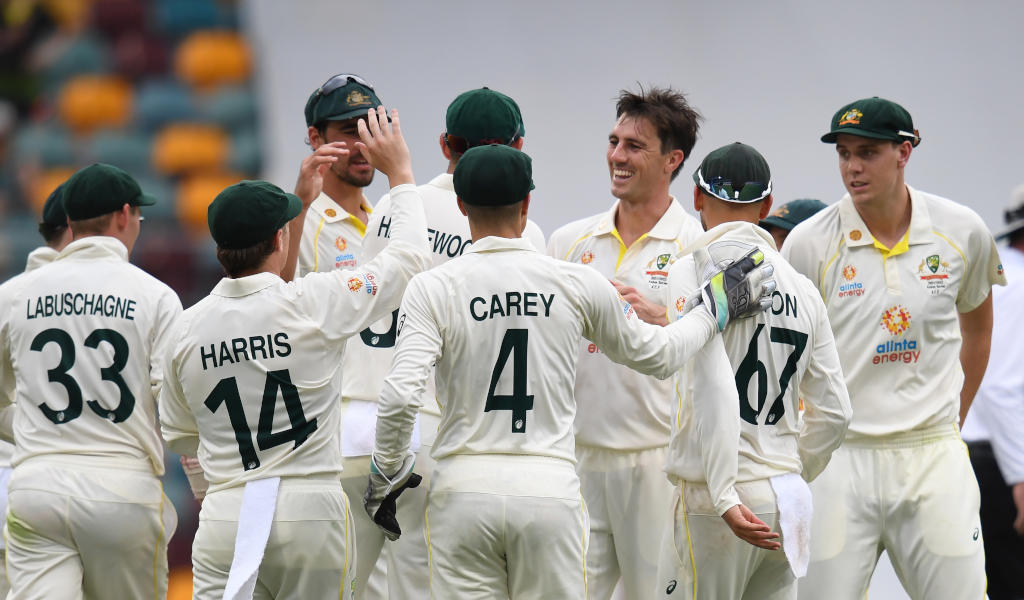 Australia captain Pat Cummins expects Rory Burns’ first-ball dismissal to go down in Ashes legend after England’s decision to bat first backfired horribly on day one of the first Test.

England skipper Joe Root won the toss at the Gabba but passed up on the chance to set his seamers loose in ideal conditions, instead handing the overcast skies and green pitch over to the opposition.

They proceeded to roll England for 147 in 50.1 overs, with Mitchell Starc setting a train wreck in motion when he yorked Burns with the opening delivery of the five-match series.

For the last 15 years, Steve Harmison’s wayward wide to second slip at the same ground has been the gold standard for dodgy starts, but Cummins believes the moment has now been trumped.

“It was a dream start really. At the start of an Ashes series everyone goes back to Harmison, so hopefully that is the new memory now,” he said with a broad smile.

“I’m so happy for Starcy. He’s got a knack of picking up wickets in the first few overs and I was just excited, it was a great way to start things off. He was pumped, we were all pumped.”

Australia ensured that instant breakthrough was no flash in the pan as their trusted pace unit continued generating chances and their fielders snapped up every chance.

Cummins marked his first day as captain with fine figures of five for 38, Josh Hazlewood took out key man Root for duck and even all-rounder Cameron Green chipped in with a maiden Test wicket.

Despite their success, Cummins opted not to rub in Root’s ill-fated decision to bat – an act of undue caution that is likely to be picked over for some time. Just as Nasser Hussain was haunted by his decision to bowl first in Brisbane in 2002, Root may now find himself in the same boat for the opposite call.

“I guess it’s tradition, if you bowl first and it doesn’t work out you get hounded,” he said.

“But it was one of those wickets that I genuinely wasn’t upset to lose the toss, it was a 50-50 and we made the most of it, which is great.”

Ollie Pope, who shared a bright stand of 52 with Jos Buttler before both men were dismissed in the 30s, also attempted to steer the debate away from Root’s tactics.

“That’s above my pay grade. I don’t want to look too much at the toss, we just have to execute better in the first two hours of the game,” he concluded.

“The pitch did offer a fair bit early on. It obviously wasn’t the end result we wanted but we’re not going to get too down about it now, both teams have got to bat on this wicket. It was a disappointing start and there was frustration that we haven’t been able to put on the big score we wanted.”

Torrential rain and bad light meant the entire evening session was wiped out before Australia’s reply began, but England will be defending a slender position on day two.

For all the English fans watching through the night or waking up to bad news on their phones, Pope promised the team would scrap hard for a foothold in the game, but it may take more bad weather to save them now.

“It’s a long tour, a long series, so we’re going to keep the spirits high and come out fighting,” he said.

“We don’t know how this wicket is going to react tomorrow. We’re going to come back stronger and hopefully put a good score on the board second dig after knocking them over.”

As for the man on the wrong end of the first-ball drama, Pope added: “I know what Burnsy is like, he’s a competitor and he’ll come back fighting.”