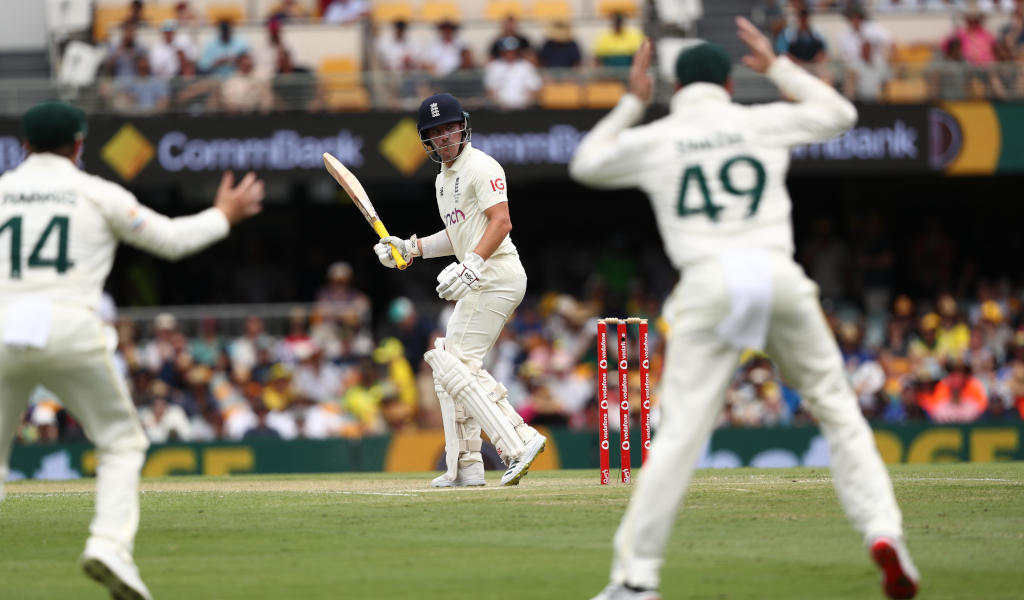 Rory Burns came desperately close to a second duck of the match as England began the mammoth task of batting their way back into the first Ashes Test in Brisbane.

Australia were finally bowled out for 425 on the third morning, a handsome lead of 278, leaving all eyes on Burns following his leg stump dismissal off the very first ball of the series.

He started England’s second innings at the non-striker’s end, an apparent admission of nerves given he has kicked off the innings in all but two of his previous 54 knocks in Test cricket, but was soon under the pump.

The left-hander had yet to score when he shuffled across the stumps to his third ball and was pinned in front by Starc, whose loud lbw shout was upheld. After a brief discussion with partner Haseeb Hameed, Burns called for DRS and was relieved when ball-tracking showed the delivery narrowly going over the top.

England reached lunch on 23 without loss from eight overs, Burns fighting through on 13 not out and Hameed making 10no.

Australia were able to cause some jitters, Burns almost deflecting Josh Hazlewood into his stumps and coming close to springing Pat Cummins’s short ball trap with a mistimed pull that snuck past the man at square leg. Hameed also had a scare, nicking Hazlewood just short of the cordon, but hopes of a significant first-wicket stand were still alive at the break.

The hosts had added 82 to their overnight score, stacking up the English deficit with every scoring shot and keeping a weary bowling unit in the field for much longer than they would have hoped.

Centurion Travis Head was responsible for 40 of those runs, picking up where he left off on the second evening with a series of care-free strokes to finish with 152. One caught the eye particularly, lofting Ben Stokes’ second delivery back over down the ground for a sweetly-struck six.

It was the kind of ‘alpha’ move Stokes himself is known for and would have stung the all-rounder, who was not expected to bowl again after receiving treatment for a knee injury overnight.

Head also brought up his 150 in style, slog-sweeping Jack Leach as the spinner coughed up his 100th run from just 73 balls. Head coach Justin Langer admitted in a TV interview before play that there had been a pre-meditated decision to go after the Somerset man and Australia delivered in spades as Leach finished with a wince-inducing economy rate of 7.84.

It took England 55 minutes to take their first wicket of the morning, Chris Woakes relieved to see Starc pick out Burns in the deep having chipped in 35 handy runs. Mark Wood then picked up some belated, but deserved, rewards as he bounced out Nathan Lyon and smashed the base of Head’s stumps to end the innings in the 105th over.