Home The Ashes The Press Test daily: Bairstow the butt 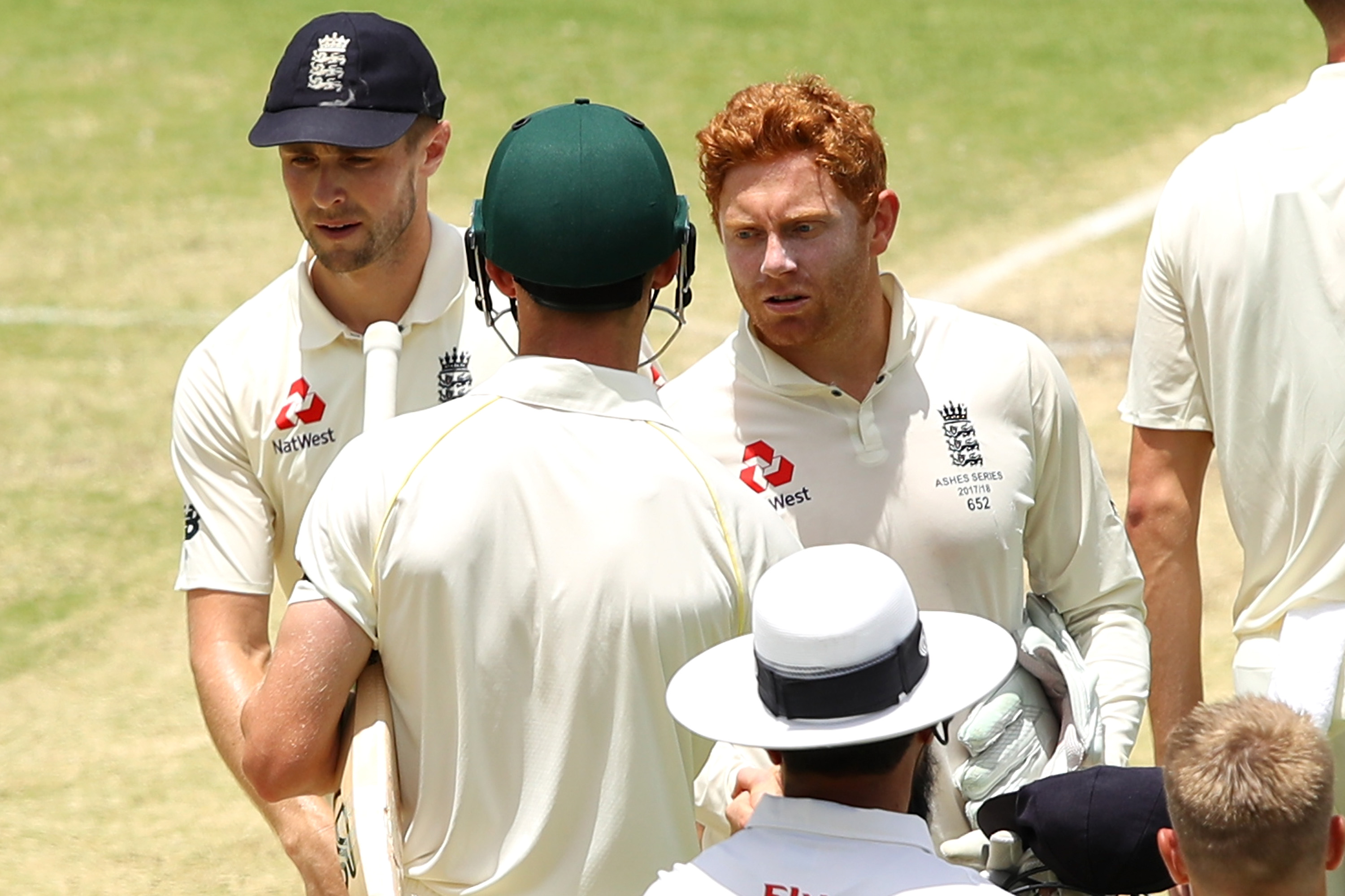 Thank the Lord above for month-old headbutts giving us something to write about on a one-hour day.

“Bloody hell”, we thought, when the Gabba Test just about dragged itself into the final day. ”

“How in the name of Jardine are we going to get 500 words of snark out of an hour’s low-key cricket in front of 30000 empty seats and the Barmy Army?”

It was adorably naïve of us to worry. Imagine thinking a lack of on-field action would mean there would be nothing to discuss. This is the 2017/18 Ashes, for crying out loud.

What happened, of course, was that Jonny Bairstow headbutted Cameron Bancroft. Or didn’t. Or sort of did but not really.

“There was no intent or malice,” was the official verdict, on both Bairstow’s unorthodox method of greeting, and England’s back-up bowling.

It really should have been obvious as soon as this story started to emerge that there was far less to it than some in the media were suggesting.

If Bairstow really had properly headbutted a Western Australian Test prospect on the first night of an Ashes tour that had already seen one key England player ruled out for bar-based fisticuffs, there’s literally no way that would have taken a month to come out.

But even after today’s play, as Bancroft gave one of the all-time great press conferences, there was still an attempt from some to make something more of it.

Even as Steve Smith sat next to Bancroft giggling, one Aussie journalist was talking about how a headbutt “could have broken his nose, put him in the hospital”.

Clearly, both the Aussie players and media have deliberately timed the release of Bairstow’s headbutt to hurt England at a vulnerable time.

It was clever of the players to use it to try and unnerve Bairstow while he was batting, and by all accounts it seems to have worked.

The Aussie media’s role is slightly more embarrassing. Never afraid to abandon journalistic integrity for a good old-fashioned bit of cheerleading or Pom-baiting, they have spent much of the last 24 hours pretending to be gravely concerned by the “drinking culture” in the England team.

It’s understandable, of course, with Australia being a famously dry country. It’s hard for them to understand a country where drinking is such a big part of life as it is in England.

We’ve all heard the famous stories about David Boon drinking 52 cans of Diet Coke during a flight to the old country.

Some have even gone as far as suggesting that some of Nathan Lyon’s less spicy pre-series quotes about “head-butting the line” may have been an oblique reference to what transpired in that Perth bar.

For one thing, this may be crediting Lyon with the sort of subtlety and guile that exists only in his bowling, it leaves us having to explain how Michael Clarke was able to make his own clever reference to BairstowheadbuttingBancroftasaweirdkindofmisjudgedgreetinginaPerthbarforsomereasongate almost two-and-a-half years before it happened.

But while the incident itself is clearly less than nothing, you can see why Trevor Bayliss was so exasperated.

It’s all undeniably very funny – Bancroft has just hit the winning runs in an Ashes Test, but even had he bagged a pair his would still have been the greatest Test debut of all time – but it hurts England.

Interesting to see the reaction to the Bairstow story. There is no agenda. It happened. Major problem in Eng Team with drinking.

This perhaps explains why a Bayliss felt the need to both point out the staggering banality of the incident at hand, while also saying the players would need a “stern word”.

At first, this may seem a contradiction, but his concern is not that Bairstow has done anything ‘wrong’, more that he has given Australia yet more ammunition.

It was typical of Australia that they knew just the moment to use it in order to cause maximum damage. It’s advantage Australia in more ways than one.