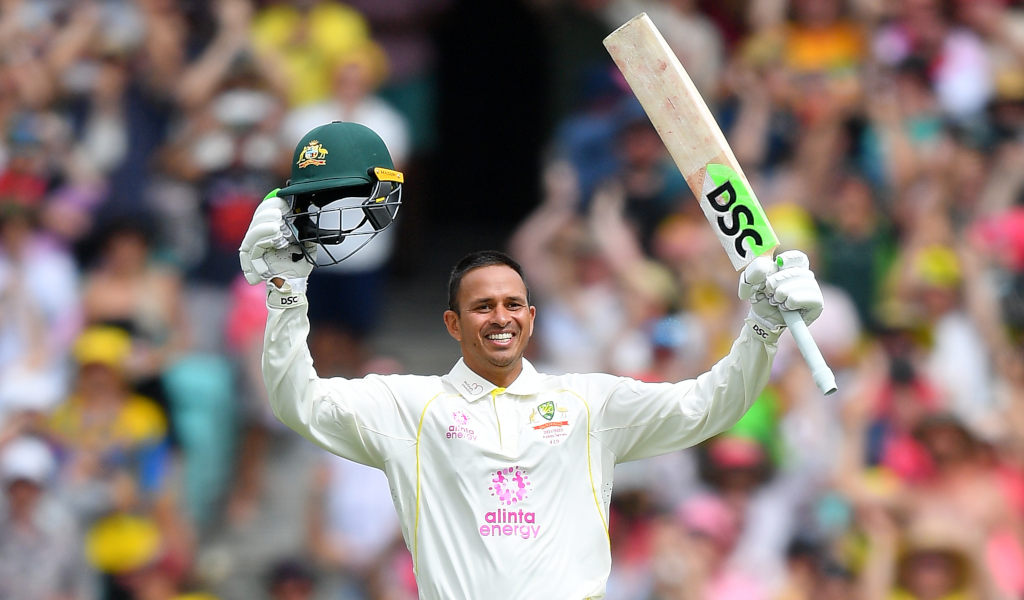 Usman Khawaja cashed in on a dropped catch to make a comeback century on day two of the fourth Ashes Test, leaving England scrapping to stay in the fight in Sydney.

Khawaja was only playing because of Travis Head’s Covid-19 diagnosis, returning for the first time since Australia’s famous defeat at Headingley in 2019, and marked the occasion by reaching 102 not out at tea.

He was aided by some slack handiwork from wicketkeeper Jos Buttler and Joe Root at slip, with the pair combining to put him down on 28, and went on to lead the hosts to 321 for six.

That quashed a Stuart Broad-inspired fightback, with the veteran seamer dismissing Steve Smith and Cameron Green with the second new ball.

England were not only concerned about the scoreboard, though, with key all-rounder Ben Stokes sustaining a side injury in the morning that looks likely to hamper his involvement for the rest of the match, or even tour.

After just 46.5 overs were possible on day one, play was brought forward half-an-hour to try and make up lost time. But instead, the New South Wales weather continued to frustrate with three separate rain breaks in the morning session.

The regular interruptions did not deter Australia, with Smith and Khawaja adding 83 to the total without loss.

Instead it was England who struggled to find a groove to settle into, using all four of their specialist bowlers in the first eight overs of the day with none able to grab the game by the throat.

The batters had been warming up before the first delay and came out hot afterwards, Smith pumping James Anderson’s first ball back down the ground as he over-pitched before Khawaja crashed Leach through cover.

Australian progress remained steady, Khawaja bringing up the 50 partnership with an aerial cut off Leach as Smith showcased his ability to manufacture scoring shots at will en route to a calm half-century.

When Jack Leach finally coaxed out an error Buttler deflected the edge of glove and thigh before Root spilled the ricochet. There was some mitigation for the skipper’s error but it arrived at gentle speed and perfect height.

England’s faces told a story of weary frustration, but that turned to anxiety as a gut-busting barrage of short-pitched bowling concluded with Stokes clutching his side and departing in search of treatment.

He was able to rejoin the fray after lunch but looked stiff and highly unlikely to bowl again in the match. The tourists were reliant on the new ball to advance their cause – never more so than when Australia milked 12 off the last two overs of the old one.

It was Broad who seized the moment, cracking Smith’s often impenetrable shell during an eventful spell. Smith sent a square drive racing to the boundary but then lost his co-ordinates, offering bizarre to leave to one that thumped him on the front pad on a leg-stump line.

DRS showed the ball was narrowly missing but Broad was in the hunt. A flick off his pads briefly kept the catcher at leg gully interested but there was no doubt when he wafted away from his body and nicked straight into Buttler’s gloves.

Next up was Green and, though Stokes’ limited movement saw a half-chance go begging at slip off Wood, Broad’s superb spell delivered again when he had the 6ft 7in all-rounder caught by Zak Crawley in the cordon.

The veteran seamer tied a bow on a spell of two for 19 and a third wicket of the innings. By now Khawaja was cashing in on his hard work, timing the ball with increasing certainty and elegance and showing his authority with a series of clean drives off Leach.

Root’s occasional off-spin chipped away his latest partner, Alex Carey’s top-edge well caught over-the-shoulder by Jonny Bairstow, but Khawaja moved into the 90 with a swivel pull off Wood.

Pat Cummins almost left Khawaja high and dry when a quick single left his partner on 99 not out at the non-striker’s end. But the pair managed to race through for a single, leaving him just enough to turn Leach off his pads and bring up a ninth Test hundred.