The Hundred kits ranked and rated

Yeah, so they announced the first batch of players for The Hundred. But far more importantly they also revealed the kits, which are a mixed bag and overall far safer than we were expecting. Bit disappointing really. Anyway, here is the correct order from worst to best.

8. Birmingham Phoenix
The best logo, which looks like it belongs to a group of supervillains with a lair under the sea or inside a hollowed-out volcano, but it adorns the weakest of the eight kits. The blocky pattern is neither garish enough for novelty value nor subtle enough to look smart, and for some reason the colours seem slightly off and evoke memories of the similarly not-quite-right hues of the 1999 World Cup kits. Trying to reinvigorate cricket in England with memories of the 1999 World Cup is not the way forward. Also, Chris Woakes in a Butterkist top is just so sweet that anyone within 100 miles of a Birmingham Phoenix game will get diabetes.

7. Oval Invincibles
An absolute clip art disaster of a logo, and an uninspiring shirt. Making the players bat in shirts and helmets sending a subliminal message to the umpire to give them out also surely a bad move. Having the shirt adorned with other hand gestures is an open goal for banter given The Hundred’s ongoing popularity among existing cricket fans. KP making a triumphant return to The Oval earns some points, although for full banter this should really have been the Trent Rockets’ sponsor.

Good effort to have New Balance make the kits and then mock up a picture of New Balance pro Jason Roy in the New Balance kit but using Slazenger. pic.twitter.com/1NvtYn9Qhy

6. Welsh Fire
I mean, it is literally a Hula Hoops packet.

5. London Spirit
Offensively inoffensive. There’s absolutely nothing wrong with it, but The Hundred is supposed to be about ripping things up and starting again. You could easily see this shirt being worn by several of the pointless old counties playing their quaint, anachronistic six-balls-per-over game. Meh. Nice to see posh crisps for the Lord’s crowd, mind. Know your audience.

3. Manchester Originals
Good solid kit with a good solid crisp for a good solid city. The grey M manages to be both massive and subtle, which is nice work. It’s as classy as the Superchargers effort but is braver and bolder.

2. Trent Rockets
The top two are away and clear of the pack, though. Really tough decision for top spot. We always love to see great synergy between club and sponsor, and the Trent Rockets have fully embraced Skips in a far more effective and interesting way than the Hula Hoop idiots over in Wales, and the logo is also perfectly decent. Trousers an afterthought, though, which is a shame. 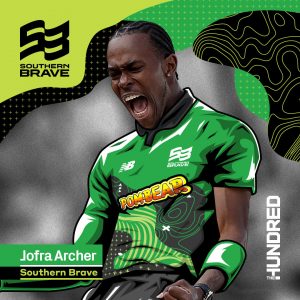 1. Southern Brave
Jofra Archer. Ordnance Survey contour lines. Some weird green stuff. POM-BEARS. This is the good stuff. The one shirt where someone’s taken a bit of a risk, and it’s paid off handsomely.