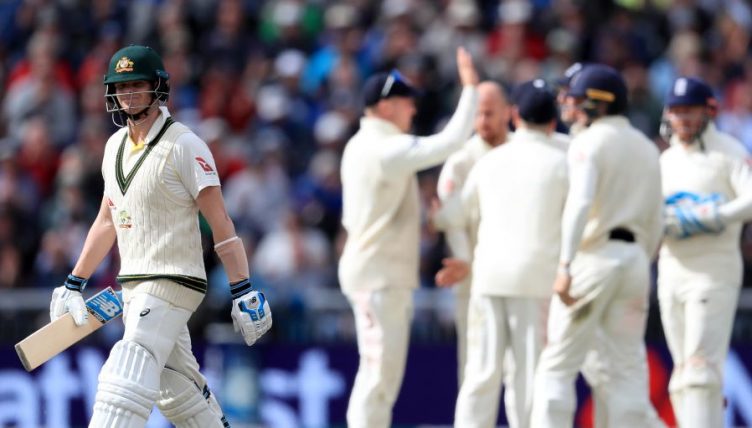 While the players convince themselves that they are playing for the actual Ashes – which will remain awhile in sweaty, hairy Australian hands – we all know that the real prize is the Ridiculous Ashes for producing the most hilarious and absurd cricket across five Tests. We have two hugely qualified judges of such ridiculousness in Alex Bowden and Dan Liebke on hand after each Test to discuss this important matter and award their official Ridiculous Ashes marks.

Dan: Hard to believe there’s still plenty of nonsense for us to assess, discuss and quantify in this Ridiculous Ashes series. There has been so much absurdity already, it seems greedy to ask for more. Can Australia bounce back from their 11-7 deficit?

Alex: Dan, can I nominate the English wind as a ridiculous moment that should be credited to England? Day one saw the English wind attack Steve Smith with a beach ball (which he hit for four) and then cause the two sides to play without bails for a while. There was also a wonderful moment where it blew some litter at Stuart Broad, who subjected it to the most ferocious intimidatory stare this side of Tony Soprano.

Dan: I think we’re treading dangerous ground if we start including unpleasant blustering forces outside of human control in these nominations. Because I could easily see your English wind and raise you Channel Nine’s coverage of the match. As always with Nine, there’s plenty of nonsense to assess. For example, despite primarily taking the Sky feed, they did manage to use the rain break on the first day to replay Stokes’ match-winning innings from the previous Test, driving at least 95% of their viewers to Netflix and/or Pornhub. A stunning misjudgement of their audience. How often have Sky used a rain delay to replay Adelaide 2006 for England fans, Alex?

Dan: So much of the ridiculousness on the first couple of days revolved around Steve Smith. The former Australian captain has set his standards of absurdity so high that we barely even think to mention his bonkers leaves any more. And yet, they’re still there, being absolutely mental, providing a platform for the rest of his antics.

Alex: Steve Smith is actively exploring new realms of ridiculousness. I’d say it has become post-modern if I had the faintest idea what that meant. There’s a certain ridiculousness in his constant presence alone.

Dan: Yes. One of Smith’s strengths is this constant presence. It’s weird on its own, as you say, but because he bats for so long, it also gives him so many more opportunities to come up with ridiculous moments than any other Test batsman. He was out there in the previously mentioned wind when that beach ball came across the ground, inspiring wags all over the cricket-watching world to declare that ‘he’s seeing them like beach balls’, when, in fact, the dismissive shot to the boundary suggested the exact reverse: he was seeing beach balls like cricket balls. He also complained about a van to the umpires and had them running off to put a towel on it. And then there was the shot to bring up his 50, a kind of lunging leap at the ball outside off stump where he seemed to only belatedly remember that he should hit it with his bat. Even allowing himself to finally be dismissed by Joe Root seemed like a taking of the piss.

Alex: And then he’s just absolutely heartbroken when he’s out, acting like England are somehow getting the better of him. I’d vote for that, but then I think asking people to throw a blanket over a Sky van that was parked on the other side of a fence was better still.

Dan: Did you just put forth two Steve Smith nominations?

Alex: I think I did. I was content for you to step across and effortlessly work a single, but then I overstepped and gave away another.

England conceding 500 when Australia only have 1.5 batsmen

Dan: There is a generalisation of basic arithmetic, called Abelian Group Theory, which can have a different variation of the fundamental concept of addition. That may serve as an explanation here. Alternatively, letting Steve Smith make a century, then dismissing him, then undismissing him because you’ve overstepped, and allowing him to make just about another century gets you pretty close to that 500 total. Especially once you include Australia’s best left-handed batsman, Mitchell Starc.

Alex: My favourite moment of the Smith non-dismissal was Ben Stokes celebration where he tried to throw the ball into the centre of the planet. (He failed.) This was ridiculous anyway, but watch the moment again in the knowledge that Smith isn’t even out and it seems doubly so.

Matthew Wade not getting the ‘nice guys’ memo

Dan: My next ridiculous nomination is for Matthew Wade who apparently hasn’t heard that 2019 Australia are supposed to be all thoroughly pleasant chaps now. Instead, when Jofra Archer arrived at the crease, Wade, fielding at short leg, immediately went on the sledge, like it was, well, like it was any Ashes Test played between, say, 1972 and 2018.

Alex: I like the idea there was a literal memo and Wade really was the only one who didn’t get it and everyone else is looking at him wondering what on earth he’s playing at but he’s just completely oblivious.

Dan: I think my favourite part of Wade’s sledging was that it was on such an innocuous topic. It was hard to decipher exactly what he was saying, because he was under the helmet and also speaking Tasmanian, but it seemed to be something about Archer being disloyal to his Big Bash League franchise. Which is a colossally nonsensical thing to sledge somebody about. Who on Earth makes ‘being part of the Hobart Hurricanes’ a fundamental part of their identity?

Alex: If I could name a Hobart Hurricanes player I’d venture a suggestion, but alas I cannot.

Alex: Yes. The principle underpinning Dark is that, “yesterday, today, and tomorrow are not consecutive, they are connected in a never-ending circle.” I really started to buy into this idea when Stuart Broad got treatment on his arm two overs before being hit on it. Do you know what was really weird about this, Dan?

Dan: Stuart Broad does so many wonderfully weird things on a cricket field that I doubt I can narrow it down to the one you’re thinking of.

Alex: Once you’ve accepted that Broad has a window into future events, what was really weird about this incident was Broad’s decision-making. He’s happy to meddle in future events by getting pre-emptive treatment for an injury, yet he won’t take action to avoid sustaining the injury itself? That makes no sense. Also, did he not look a little further ahead and see the Mitchell Starc in-ducker that cleaned him up?

Dan: Some day in the far future (which is now apparently Broad’s present), psychologists will unravel the magnificence of Broad’s mental processes. Until then, the rest of us must simply bask in its sublime inscrutability.

Dan: Smith’s second innings was chock-full of ridiculousness as he batted for a declaration, but I think my favourite part of it came right at the very beginning. Smith’s first two scoring strokes were a) a ball he left but which somehow still hit his bat and flew through covers for two and b) a four that he procured by way of a defensive shot backward of square and which became a boundary when he sent back Travis Head who was trying to pinch a quick single, triggering four overthrows. Steve Smith was in such good form that he tried to play two dot balls and accidentally got six runs for them.

Dan: Everything Smith did at the crease just highlights how badly Australia missed his ridiculousness in the third Test.

Dan: This Ashes series just highlights what a high standard of ridiculousness these two teams can muster. We didn’t even mention Jofra Archer almost dismissing both Smith (caught and bowled) and Head (run out backing up too far) with one low full toss and instead conceding four. Or Broad waving goodbye to Marnus Labuschagne when the latter’s review failed to save him in the second innings. Or Jason Roy being dropped to four and still taking strike before Joe Denly in England’s second innings. Or Ben Stokes walking.

Alex: Nor have we mentioned Mitchell Starc breaking Joe Root’s box and Joe Root choosing to continue being a professional cricketer, which, when you think about it, is about as ridiculous a decision as you will ever see.

Dan: After being thoroughly out-absurded in the Third Test, Australia hit back hard here. Steve Smith is the man who’s going to get a lot of points, it’s just a matter of for which piece of nonsense. How do you want to break it down?

Alex: I’m giving three points to ‘conceal that vehicle that’s not within my field of vision’ and one for acting like England have got one over him upon being dismissed when they really, really haven’t – particularly that one time when he wasn’t even out because it was a no-ball. Two points to Broad and his disrespect for linear time.

Dan: Sounds good to me. That makes the current score 13-11 in favour of England with everything to play for in the final Test of the Ridiculous Ashes.