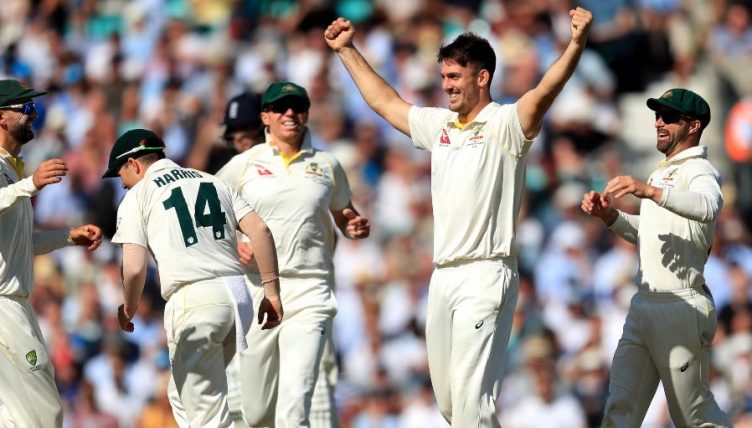 While the players convince themselves that they are playing for the actual Ashes – which will remain awhile in sweaty, hairy Australian hands – we all know that the real prize is the Ridiculous Ashes for producing the most hilarious and absurd cricket across five Tests. We have two hugely qualified judges of such ridiculousness in Alex Bowden and Dan Liebke on hand after each Test to discuss this important matter and award their official Ridiculous Ashes marks. Time for the final scores…

With one Test to play, the Ridiculous Ashes were still up for grabs. Could Australia muster sufficient nonsense to overcome England’s hard-earned two-point lead? Or would England hold on and retain the Ridiculous Ashes they won so effortlessly down under eighteen months earlier?

Dan: Knowing they needed a lot of ridiculousness in this final Test, it was great to see Australia taking it to England right from the toss. Tim Paine won it, as he is wont to do, and immediately chose to send England in on a lovely batting track, three days after his bowlers strained all day to prise the opposition out to win the Fourth Test. His players backed his decision too, conjuring three drops off Joe Root to make a mildly nonsensical decision look even crazier.

Alex: We often get caught in the same quandary on this issue. He’s, the Australians conjured three drops off Joe Root, but that also means that Joe Root proffered three chances, which is similarly ridiculous. Setting that aside, which was your favourite drop, Dan, and why?

Dan: I think my favourite of the three drops was Steve Smith’s. Earlier in the innings, Smith had done his best to drop Joe Denly when the England opener edged Pat Cummins, juggling the ball on three separate occasions before accidentally grabbing it at the last minute. But he made no such mistake when Root edged in his direction a little later. He dove and palmed the chance away effortlessly. But that’s what makes Smith so special, isn’t it? He works so hard on his game. He made a mistake in not dropping Denly with the Ridiculous Ashes at stake, but even in doing so, he non-dropped him in an absurd fashion. And then learned from his error, dropping Root perfectly when called upon later.

England throw their wickets away to Mitch Marsh

Alex: Speaking of drops, England dropped Jason Roy for this match. The majority of the team duly paid tribute to their hard-handed friend by contriving premature and unnecessary dismissals. I don’t know about you Dan, but I was especially moved by the fact that half of the players saw fit to do this against Mitch Marsh. Apparently this England team’s predictably underwhelming batting can still surprise.

Dan: This was impressively silly stuff from England. They saw Australia hitting back hard in the Ridiculous Ashes, and worked together ‘as a unit’ to create a universe in which Mitch Marsh has an Ashes five wicket haul and Pat Cummins does not. It’s like ridiculousness ju jitsu – turning Australia’s inspired recall of their nonsense talisman Mitch Marsh against them by losing their wicket to him five times.

Alex: I think that’s a point worth repeating word for word, so I’ll do that now: Mitch Marsh has an Ashes five wicket haul and Pat Cummins does not.

Pat Cummins has no balls

Dan: Speaking of Cummins, I did enjoy his cruel mockery of Jack Leach during this Test when he had Sam Curran LBW, only for the decision to be overturned when it was revealed Cummins, like Leach in the previous Test, had overstepped and incurred a no ball. Oh, sure, some will say that Cummins has been flirting with no balls throughout the series. And others will say that he was, in fact, mimicking a wicket Chris Rogers once had overturned due to a no ball. But we all know this was a sly dig at Leach. And Cummins can hardly be blamed if Curran was unable to go on to make a double century after that.

Alex: I refuse to believe that Pat Cummins has ever mocked anyone for anything. He seems an absolute gent. It blows my mind that public perception of an Australian fast bowler could ever be so overwhelmingly shaped by their bowling, but that seems to be the case with Cummins. I believe he even wore glasses several years ago to preemptively distance himself from any suggestion that a team mate may have donned glasses in the name of mockery.

Dan: He’ll be devastated when he realises you’ve seen through his disguise and uncovered his secret identity.

Alex: England uncovered several chinks in Steve Smith’s adamantium armour during this Test match. The least surprising was an inability to see backwards. Sprinting to make his ground with a throw coming in from behind, he was taken in by what I’m going to call a ‘gesture’ from Jonny Bairstow, with the keeper making as if to catch and break the stumps with a ball that wasn’t actually there. Smith dived and in his own words “dirtied his clothes”. (I think he meant the front, although it could have been a sufficiently nervy moment that you could choose to interpret those words differently if you were so inclined.)

Dan: Technically, of course, this is ‘fake fielding’ and punishable by a five run penalty. (Fun piece of trivia: Marnus Labuschagne was the first player to ever be penalised for fake fielding. Because of course he was. What a merry bunch of pioneering cricketing moments he’s cobbling together.) Sensibly, however, the umpires now never award these runs, rightly understanding that stamping out ridiculous moments such as these would be severely detrimental to the sport. If you can’t get Steve Smith out – which seemed the most probable course of events at the time – you can at least make him look a bit silly.

Alex: It was actually unnerving to see Smith show weakness like this. I fully expect him to turn up for the next Ashes with a revolving owl head or side-mounted compound eyes to address his rear view frailty.

Dan: Speaking of Smith weaknesses, I did enjoy that Smith was so disappointed when later actually dismissed for what was at that point his lowest score of the series – a mere 80 runs – that he blamed it on the flu. This is a very War of the Worlds like explanation, isn’t it? A strange, alien creature crashes down on England soil, wreaks unstoppable havoc, impervious to pretty much anything the English can throw at him, even bouncing back, scarier than ever, after a missile hits him directly in the head. And then is finally undone by a simple flu virus.

Dan: In the second innings he was out for just 23 and I can therefore only assume that he was more Sudafed than man at that point.

Alex: Smith has been so hard to dislodge that Stuart Broad at one point resorted to one of my dad’s old ploys, delivering the ball a couple of paces early from level with the umpire in a bid to disrupt his timing. Tell us what happened next, Dan?

Dan: This cunning ploy from Broad sufficiently unsettled Smith’s rhythm that he… (checks notes) hammered the ball back past the bowler for four runs.

Alex: The ruse was similarly effective for my dad, apparently.

Dan: Sadly, that’s just impossible to top, isn’t it. England ridiculously allowed Marsh a couple of centuries in the previous Ashes, and have now performed a similar feat of nonsense by giving him a five wicket haul here. Wonderful all-round performance from Joe Root’s men.

Alex: We still have to decide second and third, but I feel I do have to state at this point that that’s the winning moment: three points secures the Ridiculous Ashes for England. Hurray!

Dan: It’s true. I feel like Steve Smith’s flu, as the only thing on Earth apparently capable of stopping him, is just ridiculous enough to take the two points, but I’m not sure what gets one point.

Alex: I’m going to make an appeal for Bairstow’s fake fielding to get points too, but I’ll be honest, my foot’s off the pedal now. Technically the game’s still live, but internally I’m cracking open a room temperature one with which to toast England’s victory.

Dan: I’d like a consolation point, but Bairstow’s fake fielding was very silly stuff. And is there any point in fighting now that the Ridiculous Ashes are gone? Of course not. What do I look like, Matthew Wade? No, it’s three for England giving Mitch Marsh a five-fer, two for Steve Smith’s Wellsian flu and one for Bairstow’s fake run out. England retain the Ridiculous Ashes 17-13. A deserving reward for a very ridiculous team.

Alex: What can I say? It’s been ridiculous.