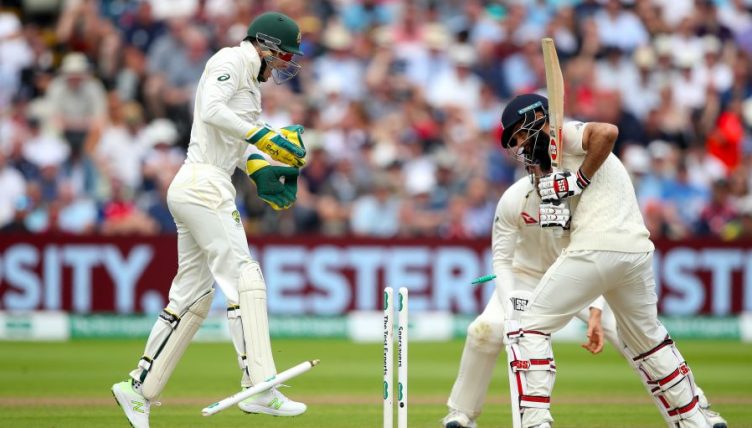 Luckily, the first Test at Edgbaston was very ridiculous indeed from start to finish and even before.

Dan: Ridiculous Ashes, Funny Ashes, Abs-urn-dity. Whatever we call it, it promises to be hugely silly, and I’m very much looking forward to Australia continuing their Ridiculous Ashes dominance in England. Ever since 2005, a series that wasn’t particularly silly at all, where the visitors scraped home in the nonsense stakes via nothing more than a bit of pre-Test Glenn McGrath slapstick and a Ricky Ponting Pratt-fall, Australia have been comedically unbeatable when touring England. But coming into this Test, I was (rightly) worried that Joe Root’s men might muster the excellent brand of ridiculous cricket we know they’re capable of. After all, we saw some very silly batting against Ireland.

Alex: Australia have certainly been very ridiculous ‘as a unit’ the last few times they’ve toured. England are perhaps more reliant on the performances of individuals. Ben Stokes famously makes all kinds of ridiculous things happen, while in Stuart Broad they arguably have the most comedically nonsense cricketer of all time (if we exclude almost everyone who’s ever played for Pakistan). You’re right that the Ireland Test showed a hint of their form too. It’s hard to top asking your number 11 to open the batting and then having him outscore everyone. I’m expecting a lot of nonsense from England’s openers, no matter who they are. I think that’ll be a key area. Anyway, enough preamble. We should probably explain to people how this works.

Dan: We should, and we shall. After each Test, we’re going to look back and highlight key ridiculous moments that took place, have some spirited debate about the pros and cons of each team’s silliness, before narrowing it down to the three key ridiculous moments of the Test. Then we’ll rank the three moments, awarding 3 points to the silliest moment, 2 to the second-silliest and 1 to the third-silliest in time-honoured 3-2-1 tradition. At the end of the series, we’ll sum up all the numbers and award the sillier of the two teams the Ridiculous Ashes. Needless to say, if it’s a tie, we’ll work out a way for England to win.

Alex: Works for me. We should probably also mention that you are completely Australian while I am fully English and so we’ll be arguing from those perspectives. Let’s crack on.

Alex: My first nomination is Pre-Match-Handshake-Gate. (Yes, that’s right, I’m -gating it.) Dan, you’re probably going to argue that this was an Australian move, but I’m preemptively counter-arguing that Joe Root being “frustrated” that he’d have to shake hands with someone because he hadn’t been consulted about it is absolutely elite nonsense. (And yes, that is a dig at Justin Langer’s infatuation with the word ‘elite’. I’m probably going to use ‘elite’ about 40 times per article, so brace yourself for that.)

Dan: Definitely claiming this one for Australia. Ever since Tim Paine has taken over as captain, he’s been on a handshaking kick – assuming such an oxymoron is even possible. I’ve maintained from the very start that Paine’s handshake policy is primarily a way of proving to opposition players that nobody in the Australian team is in possession of any illicit substance. But its secondary purpose is, of course, to drive opposition teams mental. Being the bad guys is one level of naughtiness. Trying to convince everybody you’re now good guys is another level again. But maintaining the charade even when you know nobody in the opposition is buying it is an elite, Loki-esque, level of mischief I fully endorse. (That will be my sole ‘elite’ for the series.)

Alex: I take your point about this being a form of covertly-aggressive niceness. I think much hinges on whether Root is genuinely discomfited by the handshake or is merely pretending to be bothered as a ruse. I don’t know how we answer that. Maybe we just have to accept that this early salvo was high level ridiculousness from two evenly-matched teams?

Dan: It’s much easier to be ridiculous before the game starts, of course, and it was exciting to see both teams puffing out their silly chests. But the true test is being ridiculous during the match itself. That is, after all, why they call it Test cricket (I’m pretty sure that’s the reason). So let’s get into some in-game nonsense.

Dan: We should probably have clarified up front to all participants that this was a bilateral competition, because umpires Aleem Dar and Joel Wilson made most of the early running on the nonsensical cricket front, concocting wrong decision after wrong decision. Still, at least they made all their incorrect decisions in a fair, impartial manner. This is something that the ICC apparently considers infinitely preferable than having, say, Richard Kettleborough and Rod Tucker out there making correct decisions but in an accent that matches one of the teams. Luckily, one of the great blessings of DRS is that it allows each team to join in on the silliness of bad umpiring. Dare I ask which of the two sides you think performed best on this front?

Alex: Well that’s the issue here, isn’t it? From the reviews that saved the batsman to the reviews that did for the batsman to the deliveries that weren’t reviewed that would have been dismissals, it was very hard to keep track of who was reviewing what and why, and how many times it had happened before. But I put it to you, Dan, that in failing to review Stuart Broad’s first delivery to David Warner that was edged to the keeper, England effectively gave birth to this particular brand of nonsense. Seeing the ridiculousness and seeing that it was good, Australia and the umpires merely followed suit.

Dan: Sadly, despite the absurd excellence of both Warner and Pattinson wandering back to the dressing room in the first innings when a review would have saved either of them and then Tim Paine later refusing to review England’s first innings century maker when he would have been LBW to Nathan Lyon on 21, I think I’ll have to concede the point.

Alex: Can I nominate Jimmy Anderson and his spectacularly abbreviated contribution to this match? There is a very real chance that for all the talk of his importance in the build-up, Jimmy will finish the series having bowled four overs for one run.

Dan: This was a lovely bit of subtle silliness. It not only highlighted the mad half-measure of the ICC’s new concussion rule – Anderson couldn’t be replaced by Jofra Archer unless he was willing to head-butt the first delivery he faced, something which, to Jimmy’s eternal shame, he was unprepared to do. But Anderson’s absence also allowed Peter Siddle – the man he has dismissed most often – to team up with Steve Smith to rescue Australia on the first day. Anderson is often overshadowed in the nonsense stakes by his more esteemed partner, Broad. But Jimmy is no slouch and he showed it here with some nicely understated absurdity.

Alex: It also meant that England were effectively playing their number 11 solely as a batsman. Although after what happened in the Ireland Test, that actually seems a moderately sensible move.

Dan: Alex, my next candidate is the really rather remarkable moment of cricketing ludicrousness where James Pattinson had Joe Root given out caught behind, only to have the decision be overturned because, on replay, it became clear that Pattinson had bowled him instead, but with insufficient force to remove the bail. What did you make of Pattinson’s effort to preposterously impose himself here, despite having spent so long out of the top realms of ridiculous Test match cricket?

Alex: It was hard not to be impressed. So much of the talk in the build-up to the series was about how Pattinson had been bowling “fire” but not only did he fail to produce sufficient heat to incinerate the bail (in a nod to the history of the Ashes), he couldn’t even muster the warmth needed to dislodge it.

Dan: I also particularly liked him picking up the bails to test their weight, while Joe Root, a man I remain convinced is the literal devil (that missing ‘6’ on the back of your shirt isn’t fooling anybody, Joe), beamed a grin of pure impishness at him.

Alex: My next shout is an obvious one. Even as a rabid, frothing-at-the-mouth, one-eyed Australian (hell of a look, by the way) you must surely accept that Moeen Ali’s refusal to even try and play a stroke at a perfectly straight delivery aimed right at his stumps was top level nonsense.

Dan: I’ll have you know that the one-eyedness is a genuine optical condition and I have specially prescribed contact lenses to rectify the situation. (The mouth-frothing is actual rabies, however.) But yes, Moeen’s leave was top tier, Maxwellesque, clownery. And I can offer no higher praise than that. And then to follow it up with ball in hand by bowling a full toss a metre over Steve Smith’s head? Delicious stuff from the comedy all-rounder. Sometimes you just have to acknowledge superior silliness from the opposition.

Dan: There were other silly moments during the Test – Matthew Wade inexplicably bowling, Chris Woakes inexplicably not bowling, Pattinson landing a six inside somebody’s beer – but I think we’ve covered the big moments. How are we going to rank these?

Alex: I think Moeen had a pretty great ridiculous Test all round and declining to apply bat to a ball that bowled him was unquestionably his finest moment. I’d be pretty disappointed if he didn’t at least make the podium. If you’re willing to credit England for the review thing, I’ll put that forward too because it applied a thin film of nonsense to pretty much the entire match. Which massively inferior Aussie ridiculousness are you wrongly going to suggest should make the top three, Dan? (Please don’t let the fact that we have only really identified one Australian moment and the fact that I have only named two English options for our three final spots lead you to conclude that I have already accepted that the heavy bails thing is worthy of inclusion.) (I have.)

Dan: I think there’s no doubt that Pattinson being denied a wicket because he hit the stumps is a top three moment. But, sadly for fans of Australian silliness, I can’t go past the Moeen leave for the top spot. So let’s go Moeen’s leave three points, Pattinson’s heavy bails two, terrible reviewing in response to terrible umpiring one. That gives England an early 4-2 lead in the Ridiculous Ashes. A good start from the home side, but I’m confident Steve Smith’s, er, Tim Paine’s men can bounce back.

Alex: A strong start indeed. Presumably England will name an unchanged side for the second Test, including an injured James Anderson.