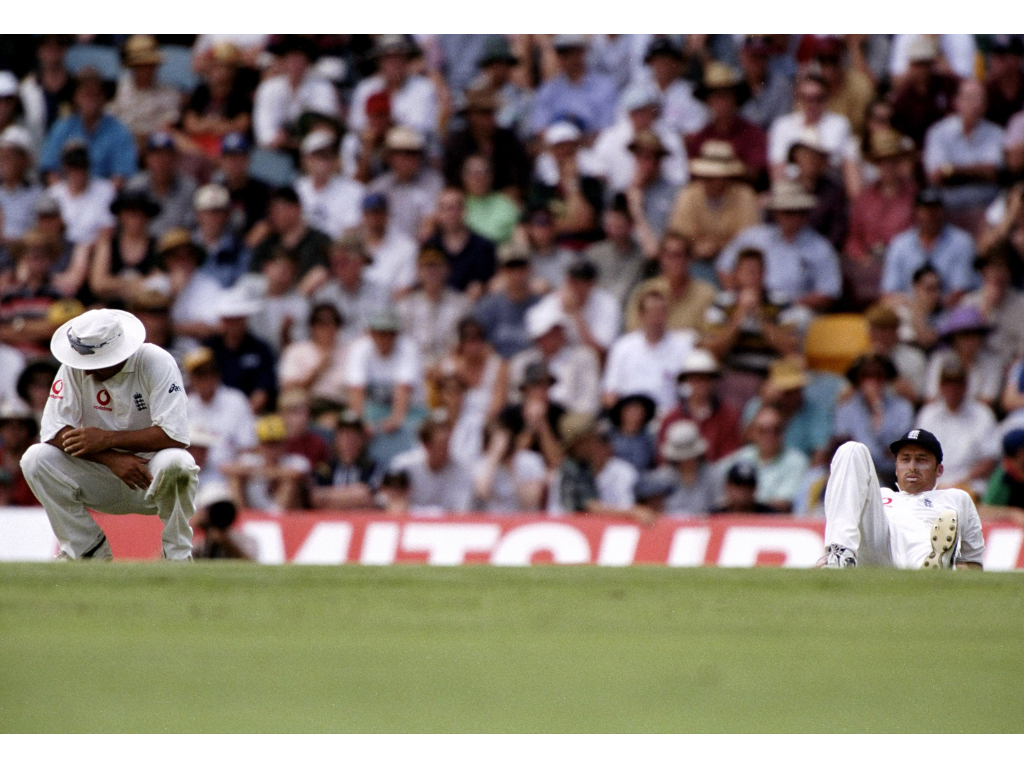 Here are seven of the worst brain fades in Ashes history… 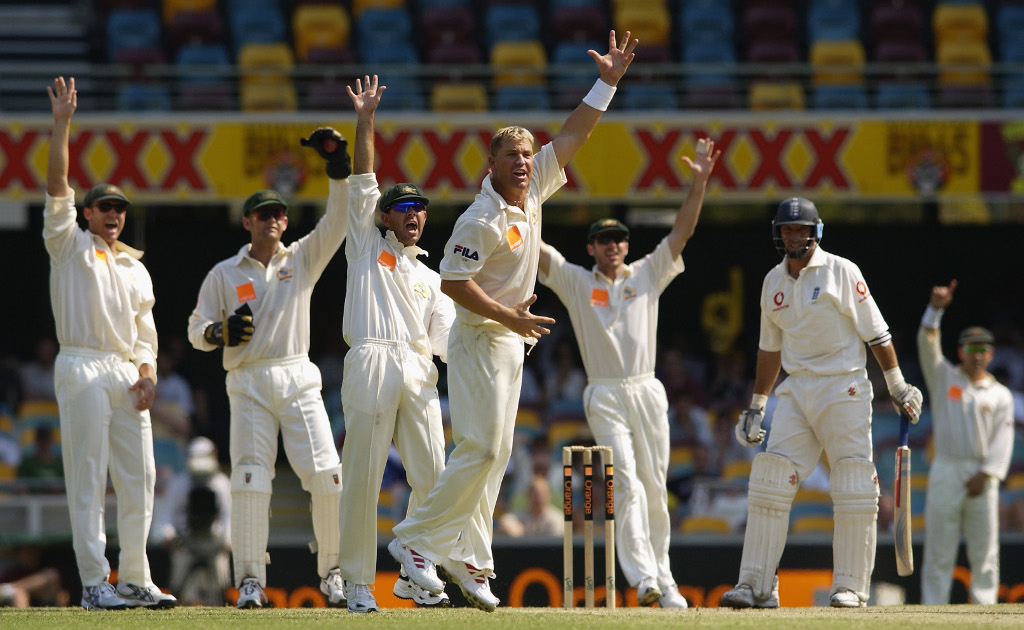 1) NASSER WINS TOSS AT THE GABBATOIR…. AND  PROMPTLY CHICKENS OUT 2002-3: England were looking in decent shape under captain Hussain and coach Duncan Fletcher  when they arrived for the 2002-2003 tour. Unfortunately, on the morning of the first Test, the Essex man detected dressing room reticence to take on the Aussies in their own fortress. After winning the toss,  he decided to stick the opposition in. “It’s obvious, blatantly obvious, that the decision I made to send Australia in to bat in the first Test was wrong,” said Hussain. Damn right it was. The home team ended the day 364-2 and the tone was set for a 4-1 pummelling. 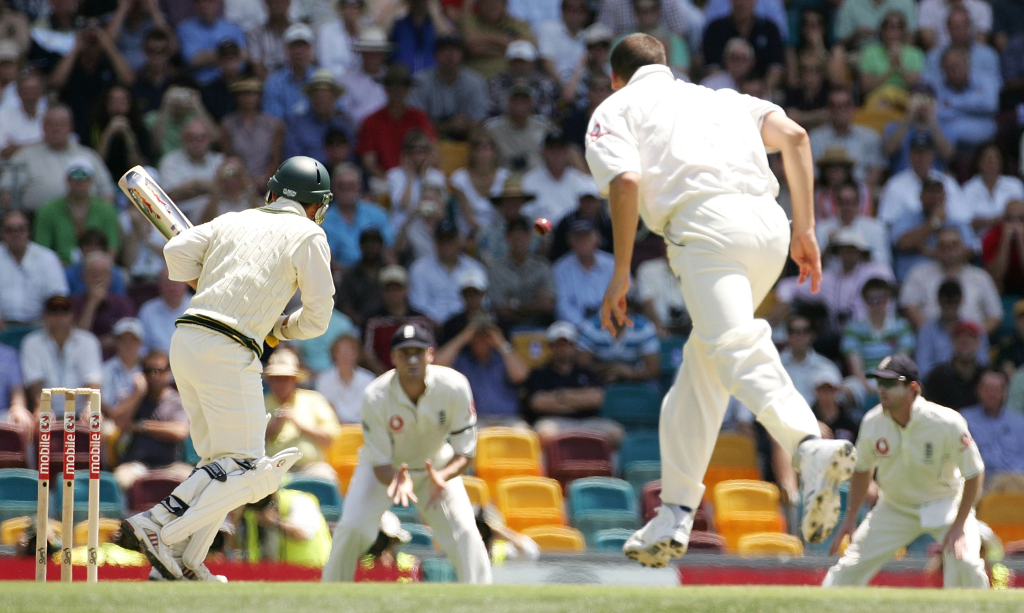 2) HARMISON GIVEN A WIDE BERTH 2006-7: After the drama of the 2005 Ashes victory, every English fan was salivating over the prospect of giving it to the Aussies on their own patch. Trouble was, the 2006 tourists were not the same team in personnel or personality.(captain Vaughan was an injured passenger and Marcus Trescothick flew home early with stress)

As for the cricket, it only took only the opening ball from Steve Harmison landing in the lap of second slip to signal England were shot. Even Justin Langer was disappointed: “To be perfectly truthful, I felt let down after that first ball,” said Langer. “It was such a comedown after Lord’s in 2005, where I remember the ball flying past my nose to Geraint Jones. I looked around and England were looking at their toes.” A 5-0 shellacking followed. 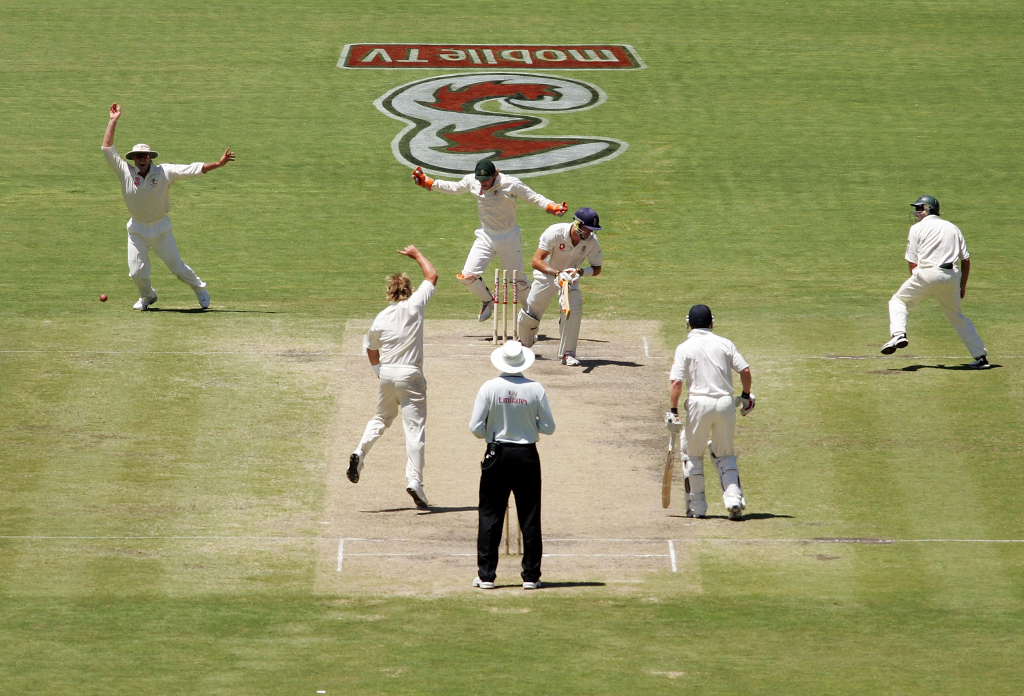 3) ADELAIDE’S CHURCH OF THE POISON MIND, 2006: In the city of churches, Adelaide, England were on top of their opponents for four days without necessarily threatening to send them to damnation. Even so, a draw would have been respectable enough to keep things at one-zip with three to play.

Unfortunately, the top order had a collective freeze on the last day, as England crashed to 129 all out. Ian Bell was run out dawdling, Kevin Pietersen was bowled around his legs by Shane Warne, Flintoff pushed at a wide one and Brigadier Block, Paul Collingwood, limped along at a strike rate of under 20. This ensured Australia had enough time to chase down the target of 168 when the Durham man, a double centurion in the first innings, ran out of partners. 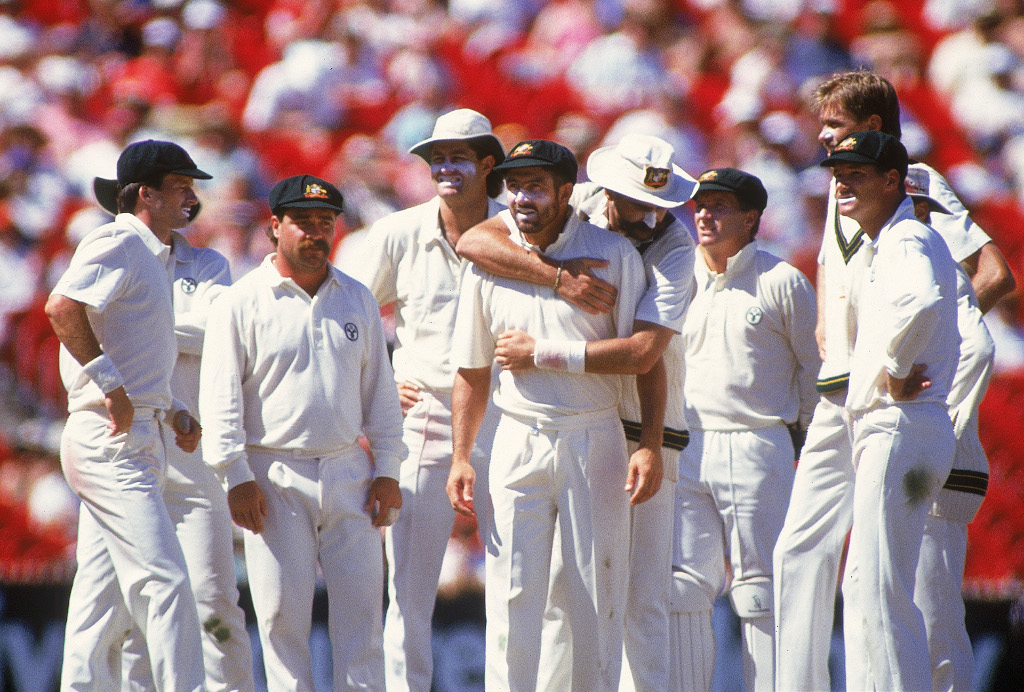 4) THE COLLAPSE TO END ALL COLLAPSES:  MCG 1990: England had a marginal lead at the MCG on first innings and were 103/1 with Graham Gooch and Wayne Larkins well set at the crease. Even at 147-4, it was safe to doze off, surely for some kip? Not a bit of it. Minutes later, the horror of hearing Mark Taylor and Geoff Marsh walk to the wicket  would have been a shock even to those used to epic Three Lions collapses. The tourists lost their last six wickets for three runs as Australia romped home with only two men down. 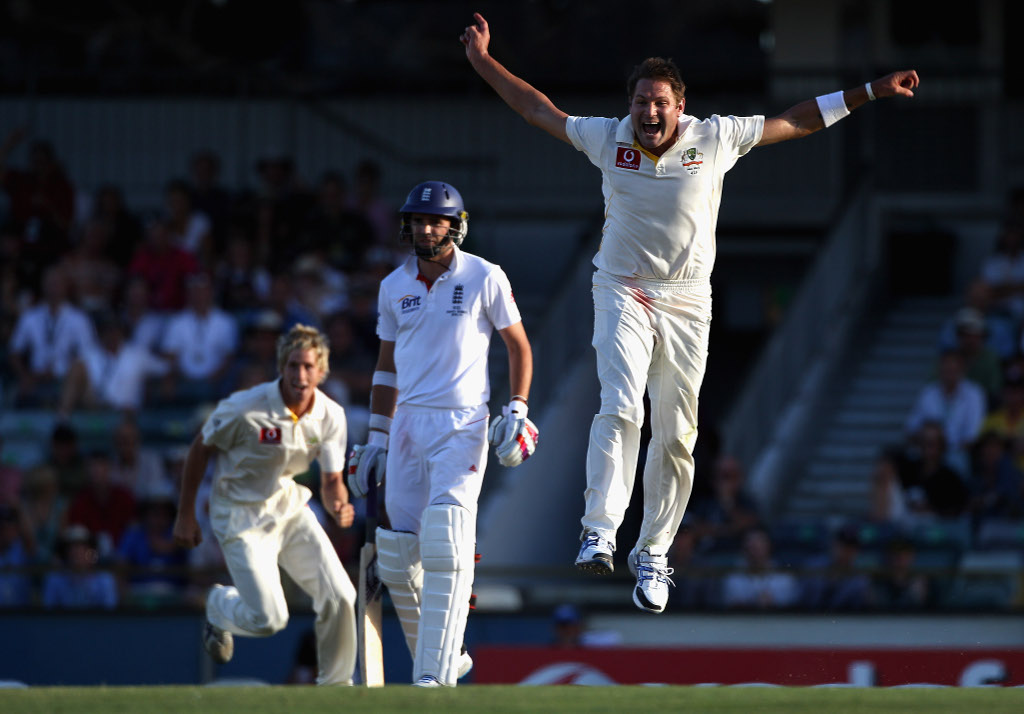 5) ENGLAND WHACKED AT THE WACA, 2010; Even when England claimed their first overseas Ashes in 24 years, they couldn’t quite get their head around (or out of the way of) Perth’s notoriously fast pitch. Andrew Strauss’s flat track bullies had a taster of what Mitchell Johnson would be like a couple of years down the road when he didn’t bowl left or right, but straight at them.

England were pole-axed as Mitch went on the rampage, taking nine in the match. Such was their collective head spin that during the dying embers of the third day, Paul Collingwood was left to face the last ball after James Anderson, the night-watchman,  refused a single from the penultimate delivery. Collingwood subsequently edged Ryan Harris to third slip. The match was lost by 267 runs but England regained their composure to win the series 3-1. 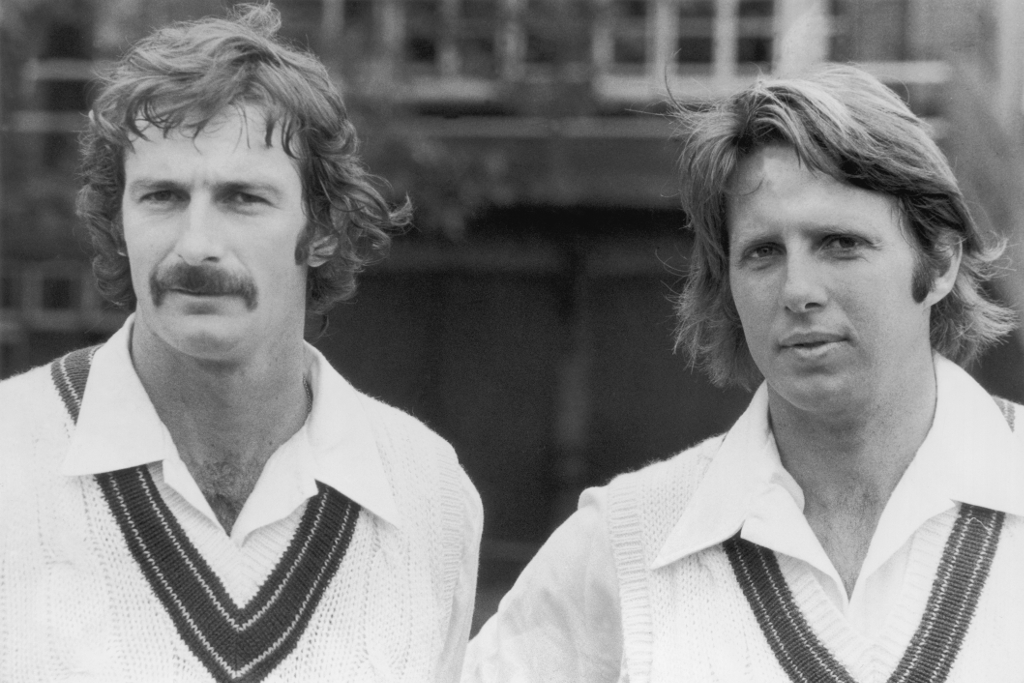 6) LILLEE AND THOMSON TERRORISE THE SENIOR CITIZEN 1974-75:  England came  as Ashes holders and not only got beaten 4-1 (winning a dead rubber in the last match) but were physically pounded by a duo called Lillee and Thomson. These were the days before arm guards, chest protectors and helmets. The 41-year-old retired Colin Cowdrey was sent out as a reinforcement to cover the walking wounded and brought his own foam padding as a form of defence.

Cowdrey walked up to Thommo at Perth and beamed: “Mr Thomson I believe. It’s so good to meet you.’  The bowler retorted: ‘That’s not going to help you, Fatso, now piss off.’”

Despite such stoicism, the team were blitzed, battered and bruised. Richie Benaud said: “It was a great disaster for England. I haven’t seen a more pathetic batting display from an England side for many a year.” 7)  FRAGILE ENGLAND FLAYED BY MIGHTY MITCH 2013/14: England travelled to Australia to play the return series just a few months after claiming the urn at home. Although they had won 3-0 in Blighty, Andy Flower’s men had  generally played turgid cricket and were bailed out by individual performances from Ian Bell, Jimmy Anderson and Stuart Broad.

Australia had seen the cracks and were ready to pounce. A stressed Jonathan Trott capitulated meekly just before lunch at Brisbane on the second day to a  revved up Mitchell Johnson and  the Warwickshire batsman promptly flew home after the match. Graeme Swann retired halfway through the series. Johnson caused carnage, taking 37 wickets.

Kevin Pietersen admitted to being “petrified” before batting while Swann recalled: “We were genuinely blown away by how well Johnson bowled.” England were simply undercooked, despite whipping up an 82-page diet book which was subsequently ridiculed.