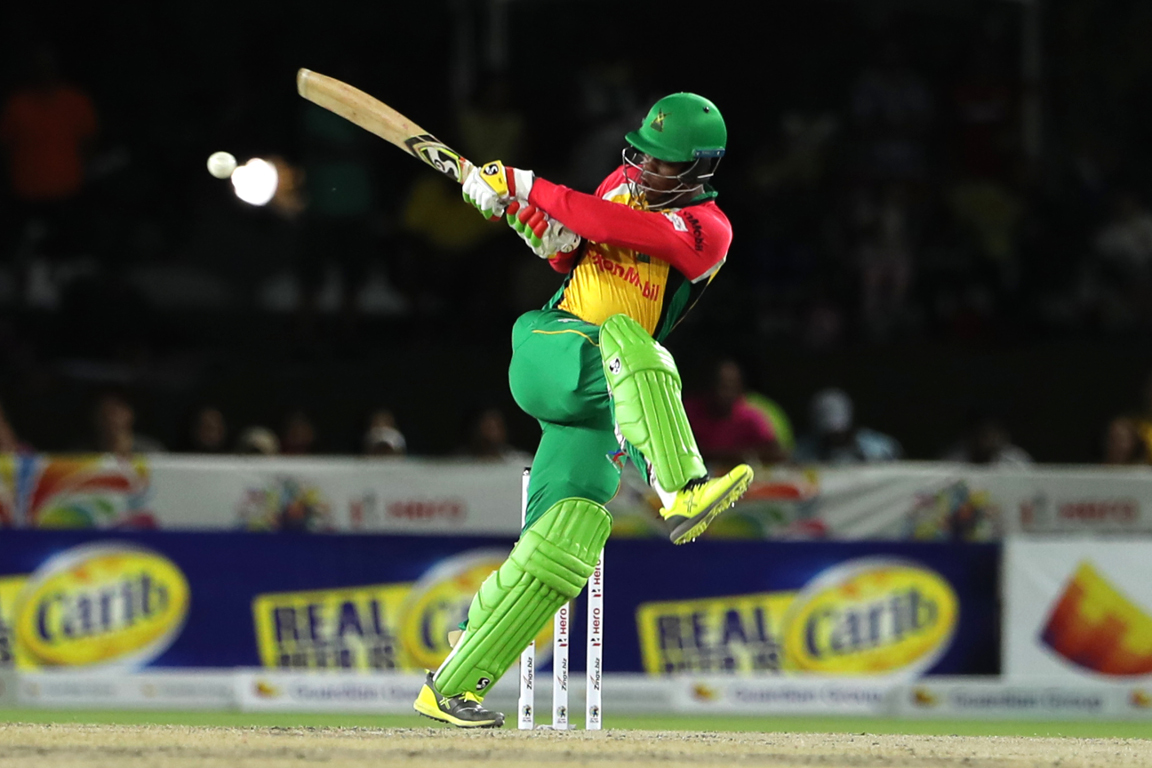 The Warriors’ bowlers had played their part to restrict the Knight Riders powerful batting line-up to just 154/7, and that left Guyana with two different targets.

As well as the usual 20-over target for the win, there was a second equation in play: victory inside 15.3 overs would be enough to leapfrog Jamaica Tallawahs on net run-rate and take second spot.

That, of course, brought with it a place in Playoff 1 and a direct route to the Final with a second chance in the Semi-final should they lose.

At 67/2 from nine overs on the back of Cameron Delport’s 37 from 27, the Warriors looked well placed for the win but behind the rate required to take second spot.

Then Hetmyer went berserk. Sixteen runs in three balls from Kevon Cooper in the 10th over propelled the score to 86/2 at halfway. When Jason Mohammed fell to Nikita Miller looking for another six, Sherfane Rutherford came in and showed how it was done.

He smashed his first two balls over mid-wicket for six, but even better was to come as the next ball was reverse-swept high into the stands for a third successive maximum.

By now it was abundantly clear the Warriors were going all out for second place. There was to be no let-up. Hetmyer continued the onslaught in the next over, passing 50 in just 24 balls as he took Anderson Phillip for another pair of huge sixes.

Then it was back to Rutherford, with the second of three sixes he smashed off Dwayne Bravo in over 13 bringing up the 50 partnership in a mere 15 balls.

Although Hetmyer couldn’t quite see his team over the line, bowled by the impressive leg-spinner Fawad Ahmed, Chadwick Walton promptly smashed his first ball for six to bring the scores level and allow Rutherford the luxury of needing just a single to finish things rather than adding to his six sixes. He still hit four to end on a whirlwind 45 not out from 13 balls.

These two teams now meet again on Tuesday in Playoff 1 for a place in the final.

While it will understandably be Hetmyer and Rutherford who take the bulk of the plaudits, there was plenty of good work done with the ball in the first half of the night just to make it all possible.

The Knight Riders were pegged back early with three key wickets falling in the Power Play. Run machine Colin Munro suffered a rare failure, bottom-edging Sohail Tanvir through to Luke Ronchi and departing for just 6 after replays confirmed the catch was clean.

Colin Ingram’s introduction to the side didn’t go to plan when he picked out deep mid-wicket off Chris Green for just 4, while Brendon McCullum was run out by a brilliant direct hit from Delport at point to reduce the Knight Riders to 23/3.

Denesh Ramdin has been in fine form since moving up the order, and continued that despite slipping one place to four to accommodate Ingram. The Knight Riders keeper made 32 and shared a 54-run partnership with Darren Bravo to steady the ship before flicking Rayad Emrit all the way to Devendra Bishoo at deep square-leg.

At that point, the Knight Riders had hit just one six in 12 overs. Dwayne Bravo promptly added a second from his very first ball. But he too fell to the returning Emrit, who recorded superb figures of 2/25 from his four overs, as an off-cutter took out the middle stump.

Darren Bravo took successive sixes off Bishoo to go back to the head of the maximum Race and give Green a problem.

Spin had worked well for the Warriors, Green himself and Imran Tahir getting through their eight overs at a combined cost of just 44. But now Green was reluctant to hand Bishoo a fourth over and needed to find one from somewhere else.

He opted for Rutherford to bowl the 18th over, and Kevon Cooper promptly took him for six and four as 15 came from it.

The big all-rounder built on that momentum with two more sixes and another four before falling to Sohail Tanvir’s final ball.

But a tight final over from Emrit kept the total down to 154/7 and that was simply nowhere near enough for the Knight Riders – or the Tallawahs, who must now face St Kitts & Nevis Patriots in Wednesday night’s Playoff 2 when the loser’s season will be over.