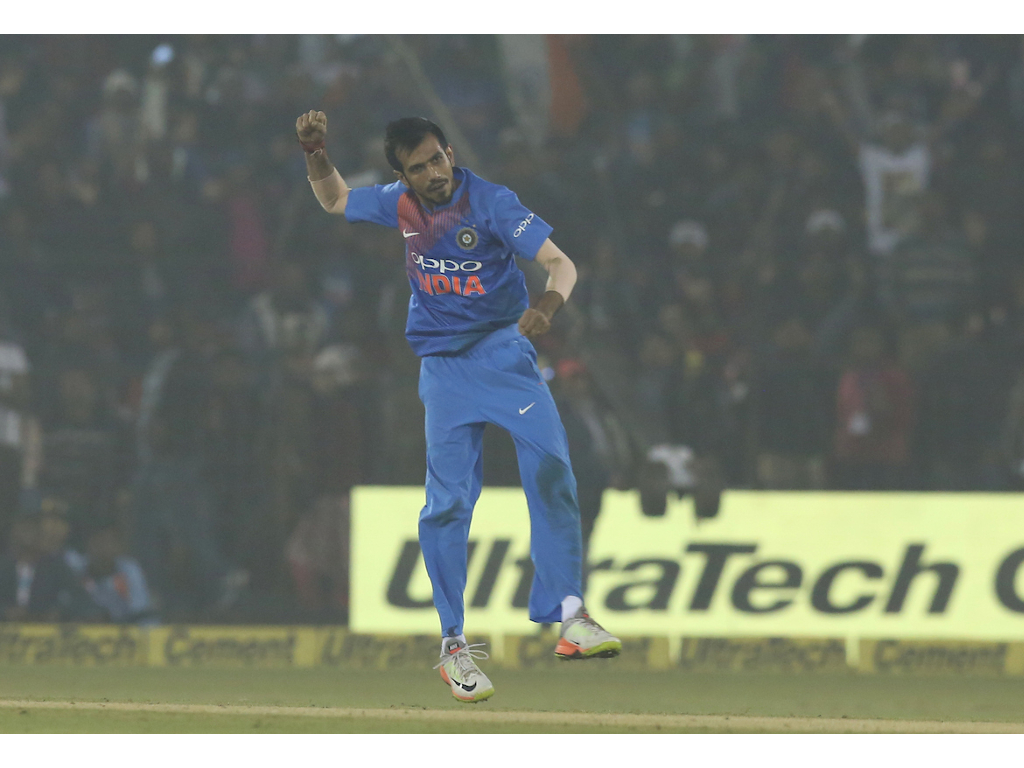 A 45,000-strong crowd got its money’s worth as a measured half-century from KL Rahul on his international return and an exceptional spell of legspin bowling from Yuzvendra Chahal helped India canter to a 93-run win, its best margin of victory in Twenty20 Internationals, in the first T20I against Sri Lanka at Barabati Stadium in Cuttack on Wednesday.

Chasing 181 for victory, Sri Lanka was blown away by the wrist-spin of Chahal and Kuldeep Yadav to end on 87 all out in 16 overs.

Sri Lanka’s chase got off to an eventful start as it scored 15 runs in nine balls before Niroshan Dickwella was undone by a slower delivery from Jaydev Unadkat, back in the Indian setup after over a year, to be caught at extra cover by Rahul.

Upul Tharanga, the top scorer for Sri Lanka with 23 in 16 balls, then got into his stride, thumping two sixes and a four in the next two overs, but his innings was cut short by an innocuous Chahal delivery going down leg, which he could only glove to MS Dhoni.

It was all Chahal and Kuldeep after that as the two spun a web around the Lankan batsmen. Chahal first removed Angelo Mathews, who lobbed a simple catch back to the bowler, then Asela Gunaratne stumped down leg with a quicker delivery that ricocheted off Dhoni’s gloves, and then had Thisara Perera on his way to figures of 4 for 23.

Kuldeep, having bowled very economically till that point, then got among the wickets as well, getting rid of Dasun Shanaka caught at long-on and Kusal Perera (19) as Sri Lanka slipped to 70 for 7 in the 13th over.

Despite the dew making it tough to grip the ball, the two wrist-spinners ended with combined figures of 6 for 41 in their eight overs to derail the Sri Lankan chase.

Hardik Pandya then polished off the Sri Lanka tail, with three wickets in seven balls to end with 3 for 29.

Earlier, after being sent in by Thisara, India got off to a quick start with Rohit Sharma laying into Vishwa Fernando, the debutant, in his first over.

Akila Dananjaya, who had dismissed Rohit in the final One-Day International in Vizag and had Rahul in all sorts of strife earlier in the year when India travelled to Sri Lanka, was brought on in just the second over, and both openers were circumspect against him.

However, with dew setting in early, the offspinner found it difficult to grip the ball and was carted for a boundary each by the openers in his second over.

Just when Rohit and Rahul seemed to be taking the game away from the visitors, Mathews struck, getting rid of Rohit who, in a bid to launch the medium-pacer over to the on side, could only slice it as far as mid-on where Dushmantha Chameera did well to dive forward and complete a good catch.

Shreyas Iyer, who was very impressive in the ODI leg of the series, continued his good form by slamming Chameera for two boundaries on the trot as India raced to 50 for 1 at the end of the Power Play.

With the pitch a little two-paced, Mathews had an lbw call off the first ball of the seventh over upheld by the on-field umpire to dismiss Rahul, but the opener reviewed the decision and was adjudged not out.

That was the opening Rahul needed as he flexed his muscles, creaming Thisara for two fours and slamming Mathews for a humongous six over square leg. He soon got to his second half-century in T20Is off just 37 deliveries with a tap to cover, as India strutted along nicely.

The two mixed caution with aggression, rotating the strike at every given opportunity to forge a 63-run partnership for the second wicket before a rush of blood saw Iyer edging one to the wicketkeeper off Nuwan Pradeep in the 13th over to depart for 24. India had, however, got past the 100-run mark by then.

Thisara then found his length and got the key scalp of Rahul, castling him with a well-disguised slower ball for a 47-ball 61, his innings laced with seven fours and a six, as Sri Lanka managed to stem the flow of runs for a bit.

With India reaching 116 for 4 at the end of 16 overs, it was left to Dhoni, batting at No. 4, and Manish Pandey to up the ante, and they did not disappoint. The senior partner started the onslaught, muscling Chameera to the deep midwicket fence to start the 17th over before Pandey got into the act hacking the pacer for a six and four to collect 17 runs in the over.

Pradeep, having bowled a decent spell of 1 for 17 in three overs till that point, then bore the maximum brunt of the carnage, being taken for 21 runs in the 19th over as India galloped towards the 180-mark.

Dhoni ended with an unbeaten 22-ball 39, slamming four fours and a six during the course of his innings, while Pandey smacked two fours and two sixes to finish with an 18-ball 32 not out as India got 66 runs in the last five overs.