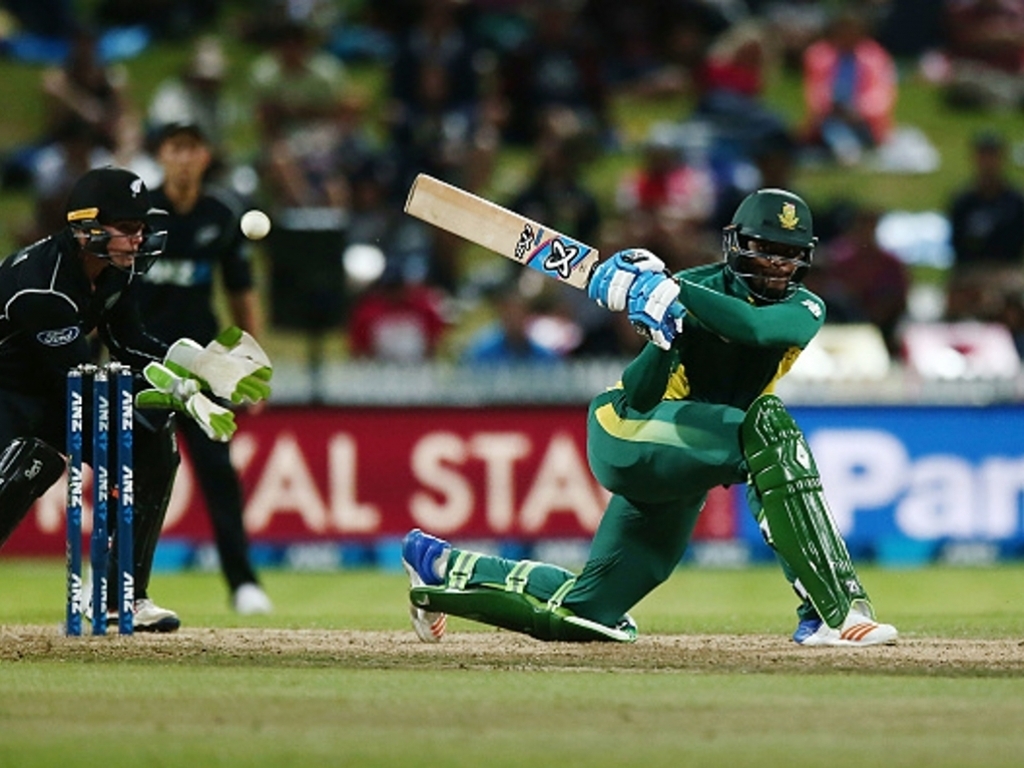 The win is South Africa’s 12th consecutive victory in ODI cricket equalling the best run ever by a Proteas team.

In a game shortened to 34 overs per side after a morning of steady rain New Zealand posted what looked like a decent total in the conditions when they reach 207/7 in their allotted overs.

Chris Morris made early inroads into the New Zealand batting lineup thanks to a review that some may feel came after the suggested 15 second time period, there is no rulefor exactly how long you have to review and just as well because Tom Latham was plumb and would have to go for a duck, the Black Caps were 19/1.

Kane Williamson joined the fluent Dean Brownlie and the pair put on exactly 50 for the second wicket before Morris struck again.

Brownlie tried to clear deep square leg but Farhaan Behardien got across to take the catch and send the opener packing for 31.

Morris would get Neil Broom in his very next over with the middle-order batsman unable to resist pulling early in his innings and picking out Behardien in the deep to leave New Zealand in trouble at 82 for 4.

Williamson (59) went to his 27th ODI half century before he chopped on a ball that turned just a little from Tabraiz Shamsi.

Int the final few overs a few stellar cameos from the Black Caps lower order saw them blast the Proteas around and post a decent score.

Morris had his figures ruined somewhat when his final over went for 25 but he finished as the pick of the bowlers with his 4 for 62.

South Africa looked in control of the chase for most of the innings thanks in large part to openers Quinton de Kock and Hashim Amla who put on 88 for the first wicket.

Amla (35) fell victim to a gamble by kiwi skipper Williamson who bowled himself and deceived the batsman who tried to smash him over the leg side but could only send it straight back to the bowler.

In the space of three overs though everything was turned on its head as South Africa lost four wickets between the 21st and 23rd overs of the chase as Faf Du Plessis (14), De Kock (69), JP Duminy (1) and Behardien (0) fell leaving the Proteas 126/5.

The skipper was determined to see his team home or at least be there at the end and although he wasn’t his usual explosive self De Villiers played a captain’s knock.

He would lose another partner when Morris (16) tried to clear long-off but succeeded only in picking out Trent Boult in the deep having been deceived by a slower one from left-arm spinner Santner.

As the match headed into the final three overs South Africa needed 29 to win and it looked like the Black Caps had edged in front with De Villiers struggling to find a boundary.

Ish Sodhi would bowl the third last over and he started brilliantly bowling a dot ball first up before beating De Villiers bat a second time and as the ball clattered into his pad the Caps went up for a massive lbw shout, they would review but the skipper survived with the ball tracking showing it would miss the stumps, the Proteas snuck a leg bye.

Phehlukwayo then struck Sodhi for four and you could almost feel the match turn and the young man grow in front of you.

South Africa needed 22 of 12 and Phehlukwayo would again find the boundary in the penultimate over, clearing the rope after picking up a Boult slower ball. He spotted the slower one got under it and muscled it over long-off for maximum. This came just a ball after he was beaten by the bowler.

They took ten of Boult and needed 12 off the final over to be bowled by Southee. The first ball of that over beat Phehlukwayo but wasn’t gathered by Latham behind the stumps and a bye was stolen the next was wide and another single was pinched, South Africa needed 9 off five balls.

Phehlukwayo managed to clear the long-on boundary with a mis-hit the next ball and the pressure lifted off the batters.

De Villiers (37 not out) finally found the boundary as he put the match to bed with one ball to spare.

Tim Southee’s return of 2 for 47 made him the pick of the Black Caps bowlers.

Phehlukwayo would end on a brilliant 29 off 23 balls as he performed the finisher role with aplomb.