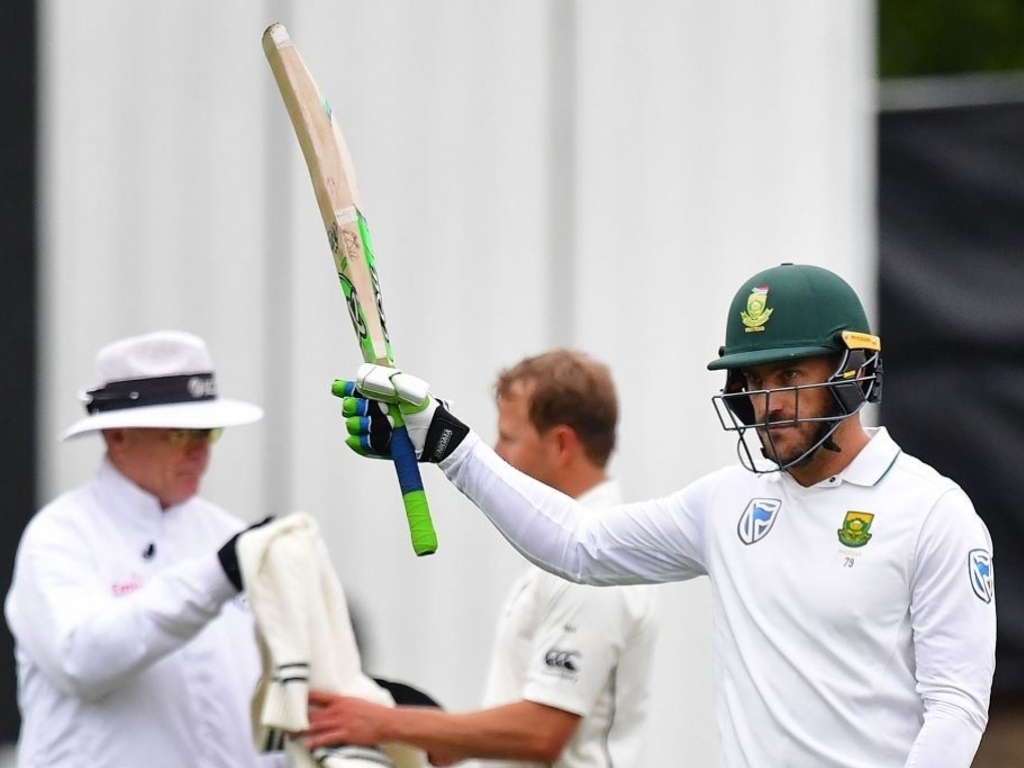 If forecast rain does not take up too much of the fifth day of this Test then we could be in for a humdinger as South Africa got to 224 for six, 195 runs ahead of their counterparts, in the process of setting a fourth-innings target for the home side.

New Zealand will rue several missed chances as they dropped catches and cocked up their use of the decision review system (DRS), wasting their reviews on appeals that were not out and not reviewing one against JP Duminy that should have been ruled out leg before wicket, plumb in front of the stumps.

Once again it was Elgar (89) who shone with the bat as he went about the duty of delivering his team to safer waters. His marathon at the crease during the course of this Test exceeded 11 hours, more than any opener since Graeme Smith in England five years ago. His fantastic first-innings effort of 140 runs rescued South Africa from a most precarious start of 22 for three on the first morning and he is certainly the most likely candidate for man of the match at this stage.

South Africa began the day on 38 for one and they failed to add to that score before Hashim Amla (24) mis-pulled Wagner to midwicket. Duminy (39) then helped Elgar to add 64 for the third wicket before Wagner trapped him LBW to cheer up a cold and silent crowd. Faf du Plessis (56 not out) then took to the middle and he and Elgar knuckled down to take the side to the relative safety of 193 for three.

Elgar then holed out in the deep as he went for a rare big shot, off Jeetan Patel (2-72), but didn’t quite get to the pitch of the ball and mis-timed it. It was the end of an exceptional performance by him with the bat in this Test, he has been the difference between comfort and disaster for his side in both innings.

New Zealand then called for the new ball soon after tea, as soon as it was available. However, before they could even bowl a ball with it, the light worsened and the umpired got out the meter. A light precedent had been set the day before and the umpires then told Kane Williamson that he could only bowl spin until it improved. I don’t believe such a scenario has ever before happened in a Test but New Zealand were then forced to use spin from both ends, with a new ball, or leave the field .

Temba Bavuma (6) and Quinton de Kock (4) then fell to spin as they were bowled by Santner and Patel, respectively. Bavuma was jolly unfortunate as he was blocking, forward, a spinning delivery, which then spun backwards and hit the stumps hard enough to dislodge a bail. The de Kock dismissal, however, will worry batting coach Neil McKenzie more as that was the fifth time that the right-arm off spinner has dismissed his “bunny” in as many innings on this tour.

Vernon Philander (1) is not out batting with his captain.

After the match, McKenzie said of Elgar’s batting, “Dean is a gutsy gritty type of character. He knows that Test cricket can be about ugly runs not just beautiful ones and he has done so well.

“We need another 60 or 70 runs to dictate terms in this match (before declaring).”

Jeetan Patel said, “We ran out of luck as a few reviews didn’t go our way. We need to look at how we discuss DRS in the future.

The excitement of having a chance to win this match is massive.”

And on being asked if de Kock was indeed his bunny, he played down such talk and said. “That was a pretty decent ball that he (de Kock) got there.”

It is a great shame that drizzle is expected all day on day five but we are in the South Island of New Zealand and such weather is no surprise in these parts. Even if it does peter out to an uneventful draw, this Test has done a lot of testing and both sides have fought hard in an entertaining contest.