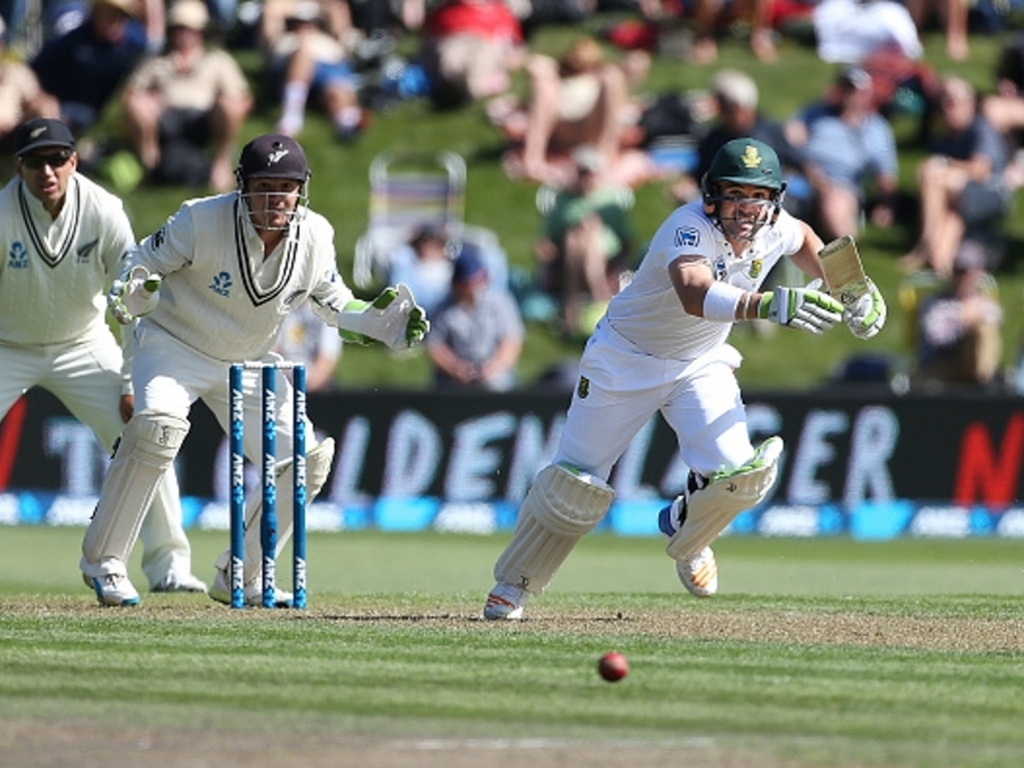 A wonderfully determined century by Dean Elgar (128 not out) helped South Africa to 229 for four at stumps on day one of the first of three Tests, in Dunedin.

South Africa had made an excellent recovery from the extremely shaky start of 22 for three, after winning the toss and electing to bat, and they will be the happier of the two teams overnight.

New Zealand will rue a great missed opportunity when Elgar was dropped on 36 by ‘keeper BJ Watling. It was a routine opportunity but catches down the leg side are always more difficult to grasp. He certainly made them pay for it as he cashed in on the opportunity to notch up his seventh Test hundred. He is well poised to go well beyond his top score of 129.

The University Oval is certainly one of the world’s most charming Test grounds and the crowd was treated to an intriguing contest as a bitterly cold morning was eventually warmed up by the very welcome sunshine.

New Zealand struck three times early as South Africa were bogged down in trying to see off the new ball. Trent Boult (1-44), playing in his 50th Test, trapped Stephen Cook (3) in the ninth over as the batsman chose not to offer a shot against a ball that was very much wicket to wicket.

South Africa plodded along cautiously and took very few risks over the next period of play but the strategy backfired as the Black Caps’ led by Boult, who bowled nine overs on the trot, bowled expertly and kept things tight on a surface that was tricky first up.

It was Neil Wagner (2-59) bowling from the other end who really livened up proceedings when he clean bowled Hashim Amla (1) and then trapped JP Duminy (1) in the same over. South Africa had been reduced to 22 for three in 19 overs, a boisterous section of the crowd sang loudly “Neil is a Wagner!”, and New Zealand were suddenly early favourites to beat a team that they have only had the better of in two Test matches over the last 55 years.

Faf du Plessis would have looked up more than down as he elected to bat first, however, as the new groundsman here had served up an odd-coloured dark brown pitch with a thick covering of grass. Add to the mix the fact that the last 22 Test match tosses in this country resulted in captain’s electing to field first and many would have been surprised that du Plessis was keen to bat.

The fact that the opposition picked two spinners, Jeetan Patel (0-60) and Mitchell Santner (0-32), and left out frontline swing bowler Tim Southee, may have deterred the Proteas’ skipper from batting last on a pitch that is likely to get very dry after a few days of sunshine.

The going wasn’t easy early on and balls behaved unusually as many kept low and some took off, especially from Patel while the ball was still hard and new. As the day progressed the bounce became increasingly consistent and carried better through to the keeper as the surface hardened up.

The role of Du Plessis (52) is not to be understated as the skipper then joined Elgar in an admirable counter-attack. 41 runs were added in the remaining 11 overs before lunch as they clawed their way back into the match. After the interval, they were solid in defence but looked to attack where possible and in total they added 126 runs as they batted most of the afternoon session as well.

Du Plessis was out pulling to Boult on the boundary as he looked to up the ante but the recovery mission had been completed. The pitch had eased up and the bowlers no longer had their tails up. Temba Bavuma (38 not out), who struggled in his last series against Sri Lanka, looked in fine touch as he and Elgar kept their wickets in tact throughout the evening session.

After the match, Elgar told the media, “Fortune was on my side today. It was right up there with one of the tougher days in my Test career.

“Only four down after 90 overs and we are in a very good position.”

Certainly, the stage has been set for a memorable Test match between these familiar foes. South Africa are a better team and have a great record in this country but one can never write off New Zealand at home.