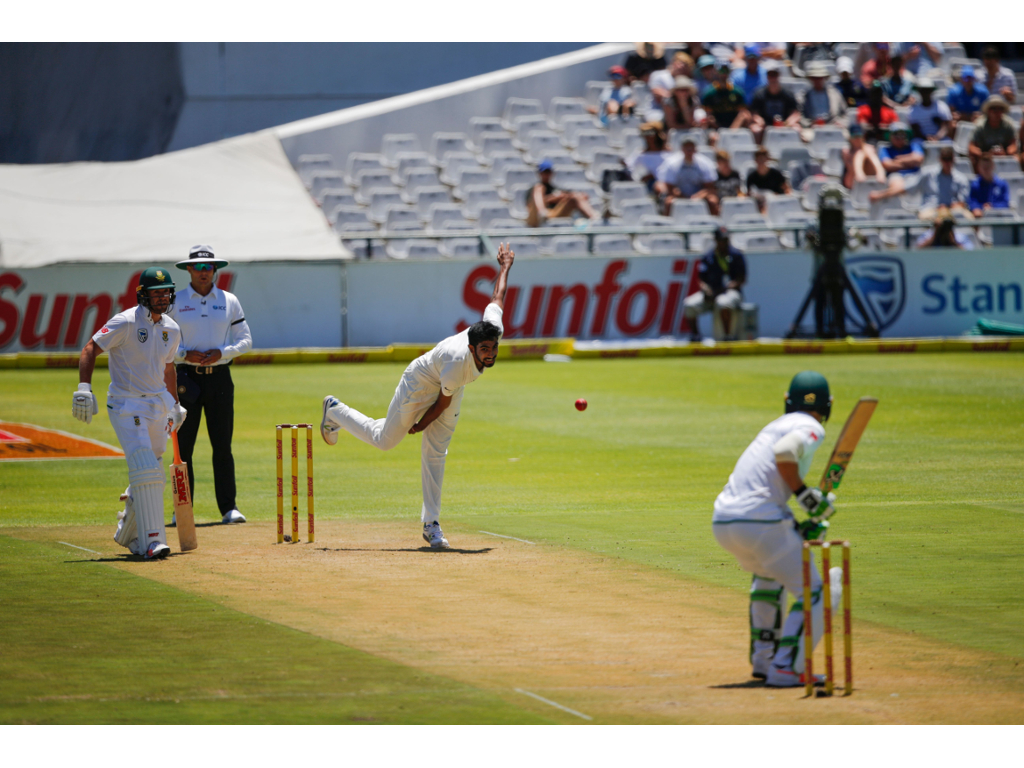 1 BHUVI IS A REVELATION: There were some who didn’t feel Bhuvneshar Kumar would play the first Test against the Proteas but the man who made his name in white ball cricket introduced himself to Newlands with a stunning display of bowling, nowhere clearer than his dismissal of Aiden Markram. He set up the opener with a string of outswingers before getting one to seam back into him and trap him leg before to leave the Proteas reeling at 7/2. His bowling could very well keep India competitive throughout the series if he can keep this up.

2  WHAT MAD SCIENTIST MADE AB DE VILLIERS AND CAN WE HAVE SOME MORE? AB de Villiers found himself at the wicket with skipper and friend Faf du Plessis with the Proteas 12 for 3 after Bhuvi’s bright start but Mister 360 was not going to grind his way out of trouble. At times he appeared to be playing on a different surface able to attack at will. He raced to fifty in fifty five balls and though he couldn’t convert that into a hundred, he played on a seaming delivery from Jasprit Bumrah to depart for 65, his knock and the 114 run partnership with the skipper turned the game.

What a game this is and what a player @ABdeVilliers17 is. The ball is jagging around, wickets are falling and he takes 17 off an over……

3 NEWLANDS HANDS OUT A LATE CHRISTMAS CRACKER: Groundsman Evan Flint and his team deserve a year’s supply of the adjacent brewery’s stock for the pitch they prepared for this first Test. Fantastic pace and even bounce coupled with movement off the surface ensured that we were treated to a terrific contest between bat and ball that enthralled the 14,000+ in attendance in Cape Town with its ebbs and flows.

Yes. Wouldn’t it be great if there were more pitches like this Newlands one. https://t.co/xJB7ES0Tka

4 BACK TO THE DRAWING BOARD FOR SUCKER PUNCHED KOHLI: We were treated to a typically effervescent Virat Kohli in the field at Newlands but you can’t help but feel some of that bluster masks an insecurity. Kohli knows that his detractors don’t think he can bat in fast bowling friendly conditions and his fighting spirit will have him desperate to do well. In his first innings of the tour, he didn’t. He was suckered into prodding at a rising delivery from Morne Morkel. No hint of ‘scared eyes’ from the great man but he certainly didn’t look comfortable.

The Kohli dismissal will be talked about in the cricket world; happens when you are a player of that stature.

5 BANG AND DHAWAN IS GONE: The Steyn remover himself returned to Test action after a year on the sidelines and we didn’t have to wait long for a wicket. Dale Steyn would prize out India opener Shikhar Dhawan with a shortish delivery that got big on the left hander who was looking to pull but succeeded only in hitting it straight up in the air, the crowd, who had cheered every mention of the quick’s name, duly erupted.