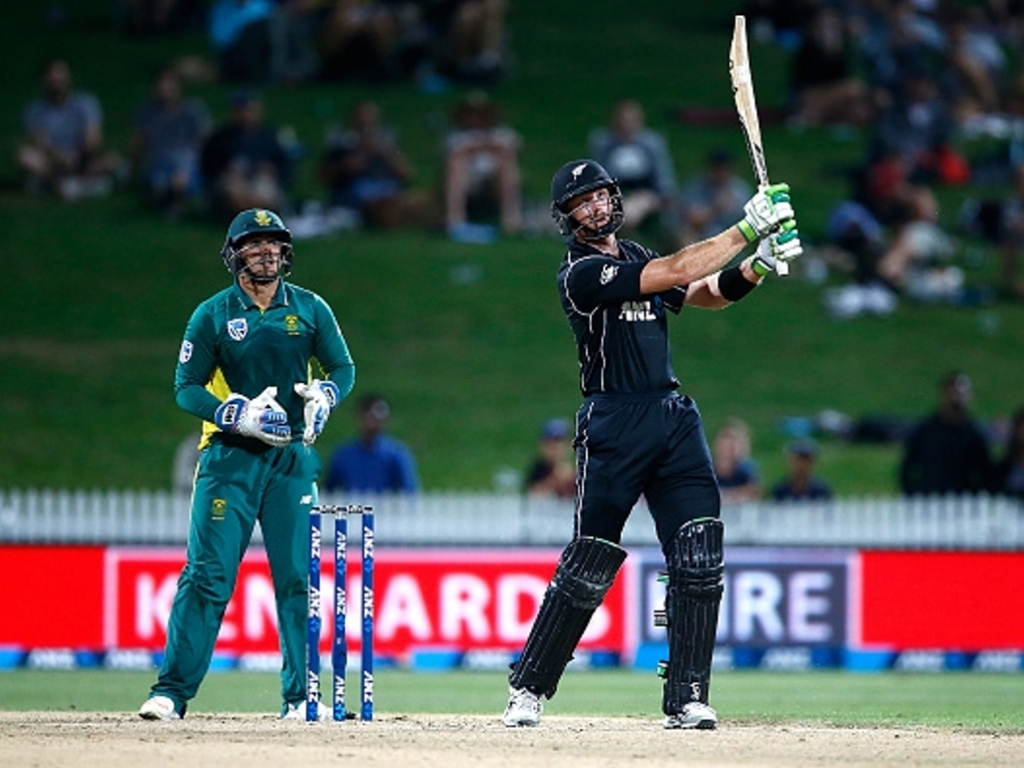 Martin Guptill (180 not out) made an heroic come back to the ODI fold in Hamilton as he stroked a bold hundred that gave New Zealand some much-missed oomph with the bat and helped level this series 2-2 with one match to play in Auckland on Saturday.

The Black Caps made light work of a challenging target of 280 on a difficult pitch and cruised to victory by seven wickets with five overs to spare, on a slow Seddon Park wicket.

South Africa lost the the number one ICC ODI world ranking as a result of the loss.

Earlier, another poor showing from the Proteas middle order negated a strong start by the visitors and, once again, it was up to the lower order batsmen to keep AB de Villiers (72 not out) company and resurrect the innings. At the break, South Africa would have fancied defending 279 but Guptill had other ideas.

AB de Villiers won his fourth consecutive toss and elected to bat under sunny skies, and on a surface that was expected to get slower yet as the evening wore on. Chris Morris replaced the injured Andile Phehlukwayo (tight groin) while New Zealand have made three changes: Martin Guptill, Luke Ronchi and Jeetan Patel played in the places of Tom Latham, Neil Broom and Lockie Ferguson.

New Zealand curiously became the first ever side to open with slow bowlers from both ends and they were rewarded with a wicket in the opening over as Jeetan Patel (2-57) found the edge of Quinton de Kock (0 from 1 ball) and in turn helped him trouble the statisticians for it was the first time the young batsman has ever been dismissed for a golden duck in his illustrious international cricket career, across all three formats. Hashim Amla (40 off 38) regained some fluency before he was bowled by the same bowler and Faf du Plessis (67 off 97) once again put up a solid showing.

However, scoring was not easy and when JP Duminy (25 off 40) was out to Southee to end another unconverted start, it heralded a collapse of four for 30 in 9.5 overs. Dave Miller (1) failed to get going once again and Dwaine Pretorius (10) was run-out in a fashion that angered his skipper at the other end.

Chris Morris (28 off 27) and Wayne Parnell (29 off 12) helped the tail to wag with de Villiers, who once again was superb and gave his side every fighting chance of winning the series with a game to spare as South Africa walloped 100 runs off the final eight overs.

The Black Caps’ spinners and part timers produced tidy figures on a pitch that gripped the slower ball and was tricky against good variations, meanwhile the frontline duo of Southee (1-70) and Boult (1-70) managed joint figures of an expensive two for 140.

Martin Guptill stole the show in reply as he stood firm in an imperious display that showed just how much his side has missed him as he sat out the first three matches of this series, recovering from injuries to both of his hamstrings. South Africa’s bowlers simply had no answer to him.

Kagiso Rabada (1-41) found an edge off Dean Brownlie (4) early on and the hosts then struggled for a few overs. De Villiers was perhaps a bit slow to attack with Imran Tahir and Pretorius, his likely most dangerous weapons on this track and instead gave JP Duminy some overs after the Brownlie wicket. Guptill smelled opportunity in this and once he was away, it was too late to do anything but in vain.

Tahir trapped Kane Williamson second ball into his spell and although there was some doubt about whether it had pitched outside leg and or may even have been doing too much, the captain selflessly decided not to burn a review. Replays showed three reds and his good judgement in turn allowed Guptill to get out of jail free when umpire Reiffel judged him LBW on 62 to Pretorius. Replays showed the ball going over the top and Guptill was allowed to continue his gallant march to a huge hundred.