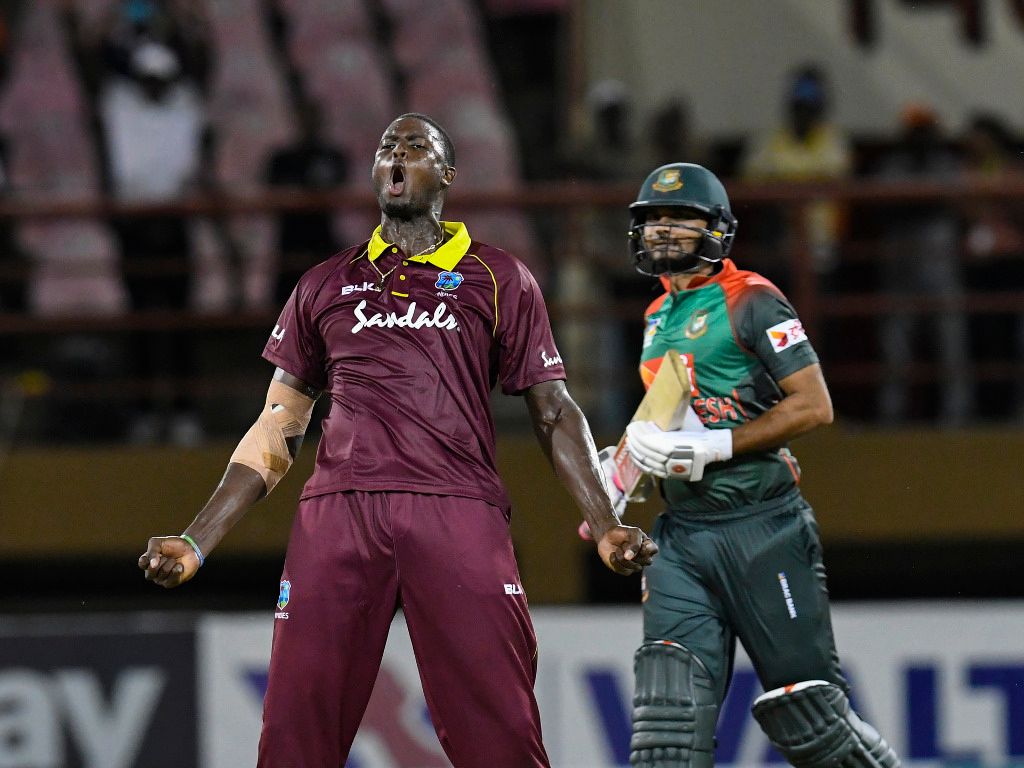 A stunning final over of the match from captain Jason Holder rewarded an electrifying second career hundred from hometown boy Shimron Hetmyer to earn the West Indies an incredible, series-levelling, three-run victory over Bangladesh in the second ODI.

Starting the final over with Bangladesh needing eight runs for victory, Holder grabbed the crucial wicket of top-scorer Mushfiqur Rahim for 68 with the first delivery and conceded 0-0-2-1-1 from the remaining five deliveries to snatch victory from the jaws of defeat, as the visitors narrowly fell short of their target of 272 on a humid night at the Guyana National Stadium.

Before this it had looked like Hetmyer’s typically enterprising 125 in a West Indies total of 271 all out in 49.3 overs after they were sent in to bat, would have come to nought – but Holder enhanced his reputation as being one of the most level-headed international players with a memorable final over in which Mosaddek Hossain and Bangladesh captain Mashrafe Mortaza failed to get their side home.

The result meant the three-match series is now level 1-1, following Bangladesh’s 48-run victory in the first ODI three days earlier at the same venue and sets up the final game on Saturday at Warner Park in St. Kitts as the decider. 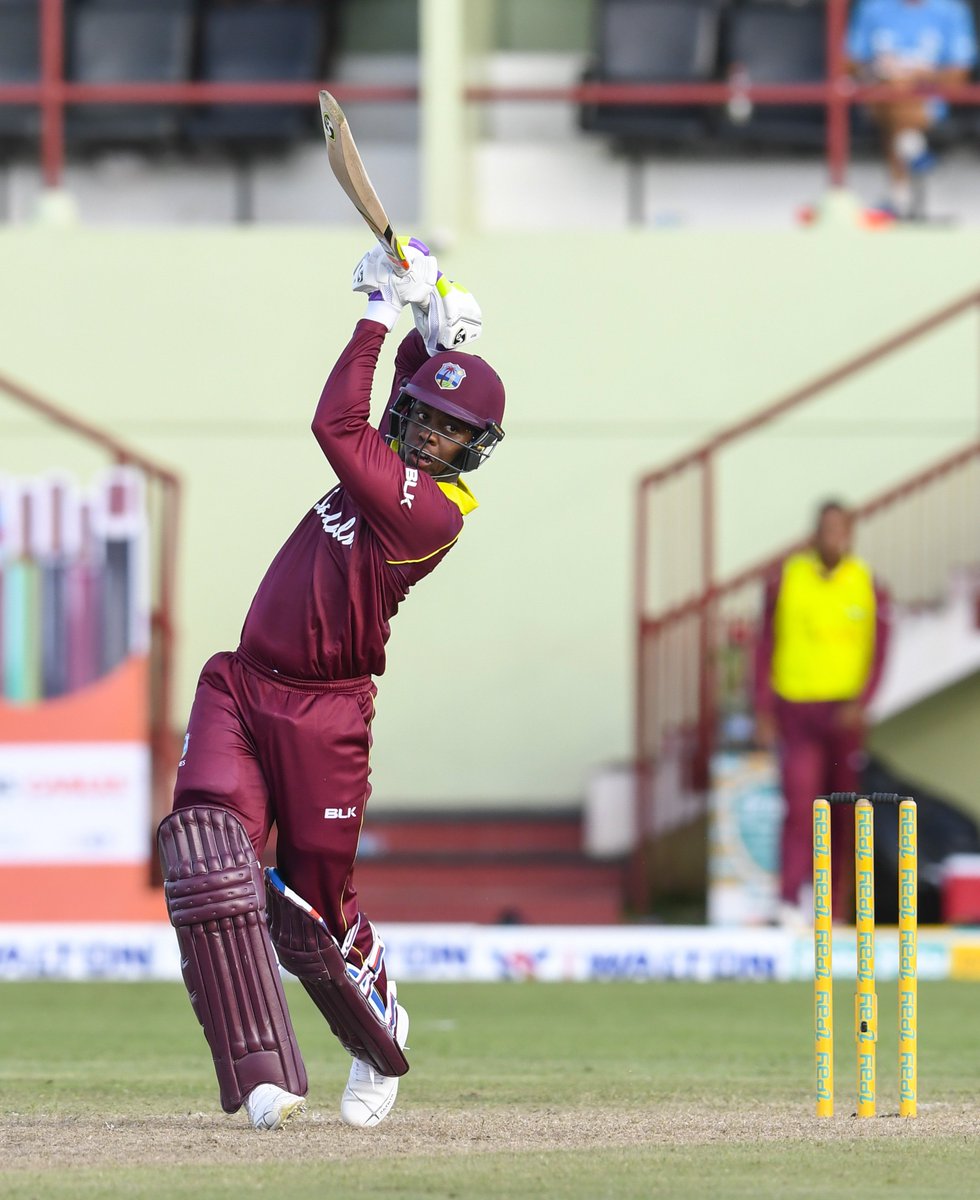 Mushfiqur hit five fours and one six in the top score for Bangladesh, Shakib-Al-Hasan supported him with five fours in 56 from 72 balls and opener Tamim Iqbal – with whom he added 97 for the second wicket – made 54 from 85 balls that included six fours.

No Windies bowler distinguished himself with more than one wicket, but off-spinner Ashley Nurse conceded just 34 runs in his allotted 10 overs and Chris Gayle, bowling his uncomplicated off-spin, gave away just 26 from seven overs.

Tamim was stumped by Shai Hope off leg-spinner Devendra Bishoo for 54, moving down and deceived by flight (129-2, 24.6 overs).

Mahmudullah was run out by a throw from Nurse, running from mid-wicket to the striker’s end, to bowler Jason Holder for 39, following indecision about taking a single with Mushfiqur (232-4, 45.1 overs)

Sabbir Rahman was caught at deep mid-wicket by Hetmyer off Paul for 12, playing an ill-advsied slog/sweep (264-5, 48.6 overs)

The not out batsmen were Mosaddek on three and Mortaza on one. 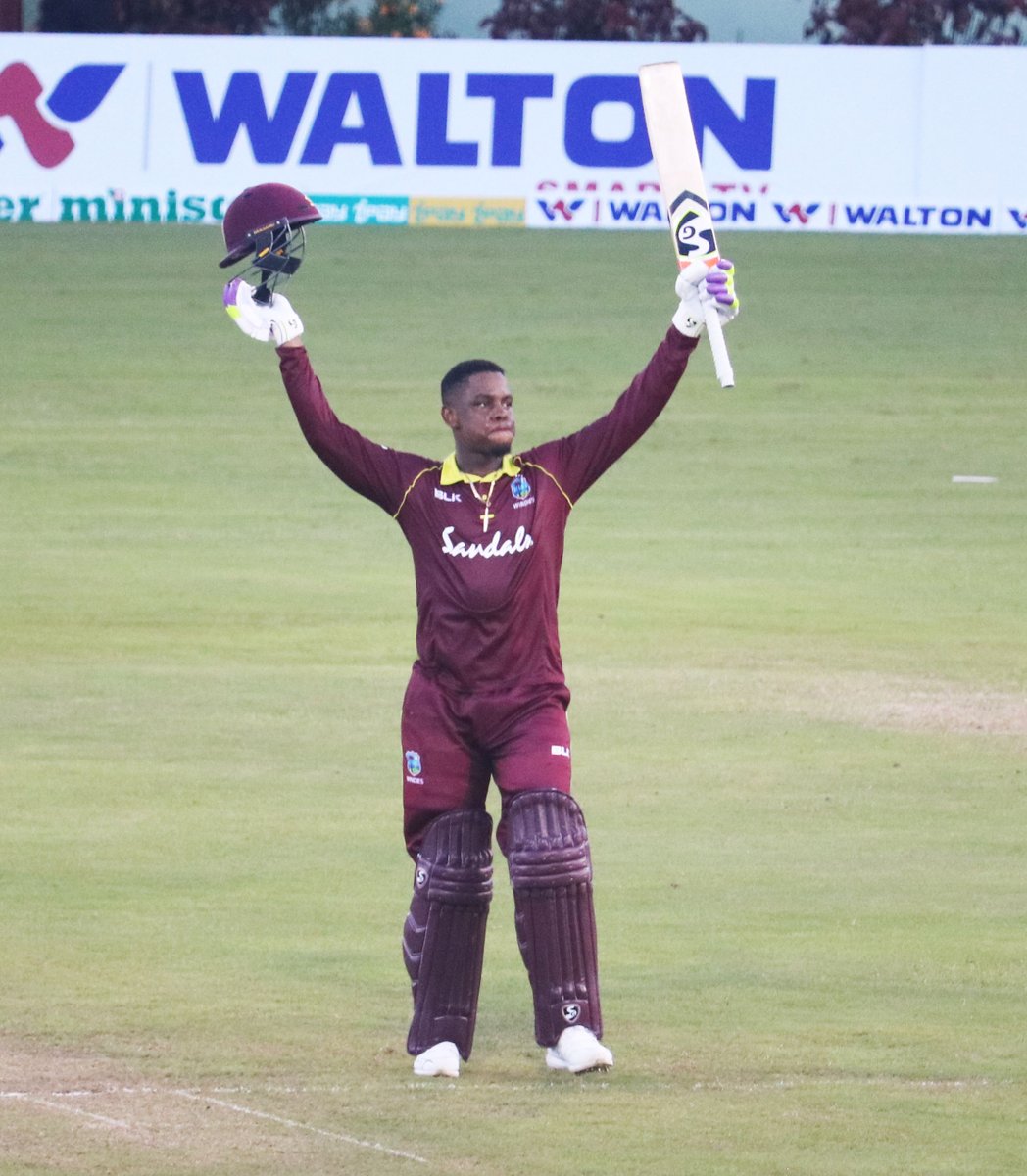 Hetmyer, who hails from Cumberland in the eastern Guyanese county of Berbice and is the 2016 ICC Youth World Cup-winning captain, punched a wide delivery from left-arm speedster Mustafizur Rahman into the vacant cover region to reach his milestone from 84 balls. It followed his top score of 52 in the first ODI and made him the youngest Windies century-maker ever on home soil.

He shared a valuable 103 for the fifth wicket with Rovman Powell, whose dismissal saw the home team lose their last six wickets for 66 in the space of 45 balls.

Rubel Hossain was the most successful Bangladesh bowler with 3-61 from nine overs, with Mustafizur and Shakib, bowling his left-arm spin, grabbing two wickets apiece.

Jason Mohammed was caught behind by Mushfiqur off Rubel for 12, getting a thin inside trying to slash through point (102-4, 23.5 overs)

Holder was stumped by Mushfiqur off Shakib for seven, charging down the pitch and deceived by flight (224-6, 43.4 overs)

Nurse was caught at third man by Tamim off Mustafizur for three, slicing a cross-batted shot (236-7, 45.6 overs)

Paul was caught behind by Mushfiqur off Rubel for four, driving loosely outside the off-stump (241-8, 46.5 overs)

Bishoo was bowled by Mustafizur for a two-ball duck, off the inside edge essaying a cut (242-9, 47.2 overs)

And, Hetmyer was run out by a throw from Mehidy at deep point to Mushfiqur, going for a second run (271 all out, 49.3 overs)

Alzarri Joseph was not out on one.