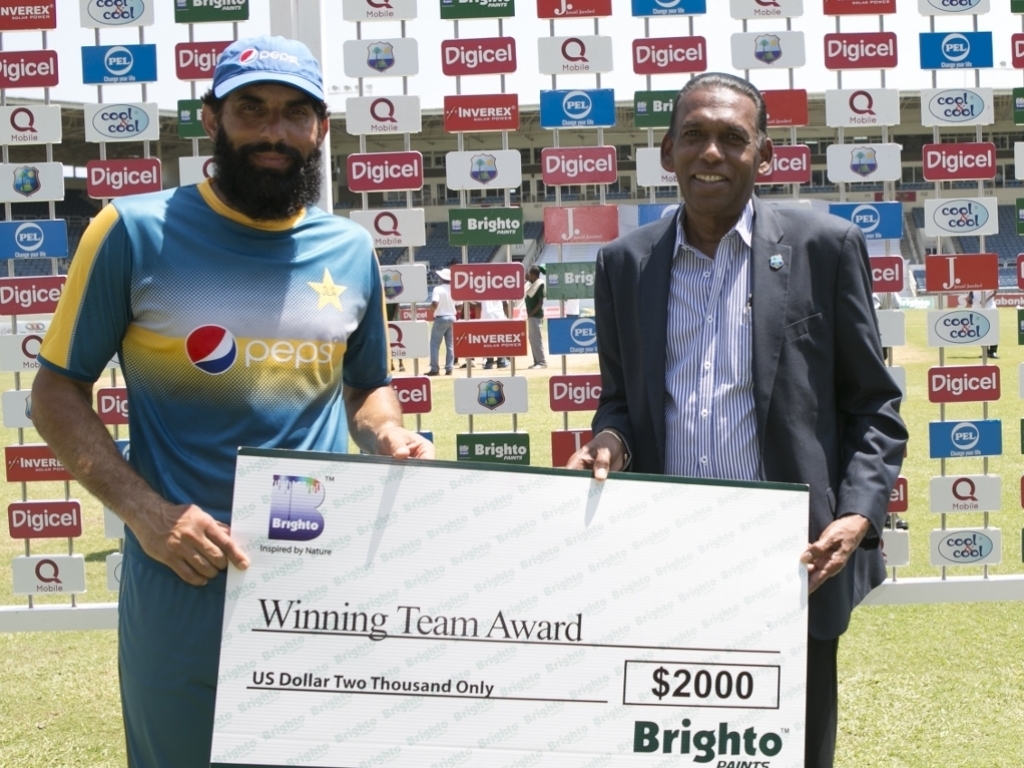 As humble as ever Pakistan skipper Misbah-ul-Haq thanked the team for what he described as a special win over the West Indies at Sabina Park In Jamaica.

It was Misbah who rounded off proceedings by smashing two sixes to see Pakistan easily eclipse the 32 run target they were set by the West Indies for victory.

Misbah played a vital role in the first innings and joined one of cricket’s unluckiest clubs as he was left stranded on 99 not out having run out of partners.

Speaking after the match Misbah said that it is important to enjoy yourself on the field: “If you’re not enjoying yourself, then there’s no point of playing. I’m not the kind of person who would linger on if I wasn’t having fun.

“These wins are special, and this is one more Test match that the team has given to me as a gift.”

Misbah was pleased that the plan they had worked out ahead of the Test went off without a hitch after they won the toss and inserted the hosts on a wicket sporting a decent covering of grass and with weather a factor.

He said: “With tricky weather, the idea was to win the toss and bowl first.

“We just had one chance to get them out quickly and then play one good innings. Otherwise it wasn’t going to be possible.

“We knew that it was going to be tough batting on the fifth day. I think the bowlers did very well. In the first innings (Mohammad) Amir, especially, his spell was crucial. In the second innings, again Amir and especially Yasir’s spell was incredible. Getting six wickets this morning in no time was the game changer.”

Misbah hinted that if the conditions appear spin friendly in either of the next two Tests there is every chance that rookie legspinning sensation Shadab Khan could make his Test debut.

He added: “Our combination will depend on the conditions we get, and especially how the pitch looks before the Test match.

“This pitch had a lot of moisture and that is why we opted to bowl first and go with three seamers. With our combination, it’s difficult, it’s difficult to sneak in the fifth bowler, especially since we have six specialist batsmen, so having three fast bowlers and two spinners becomes tricky.”