India bite back in Bangalore 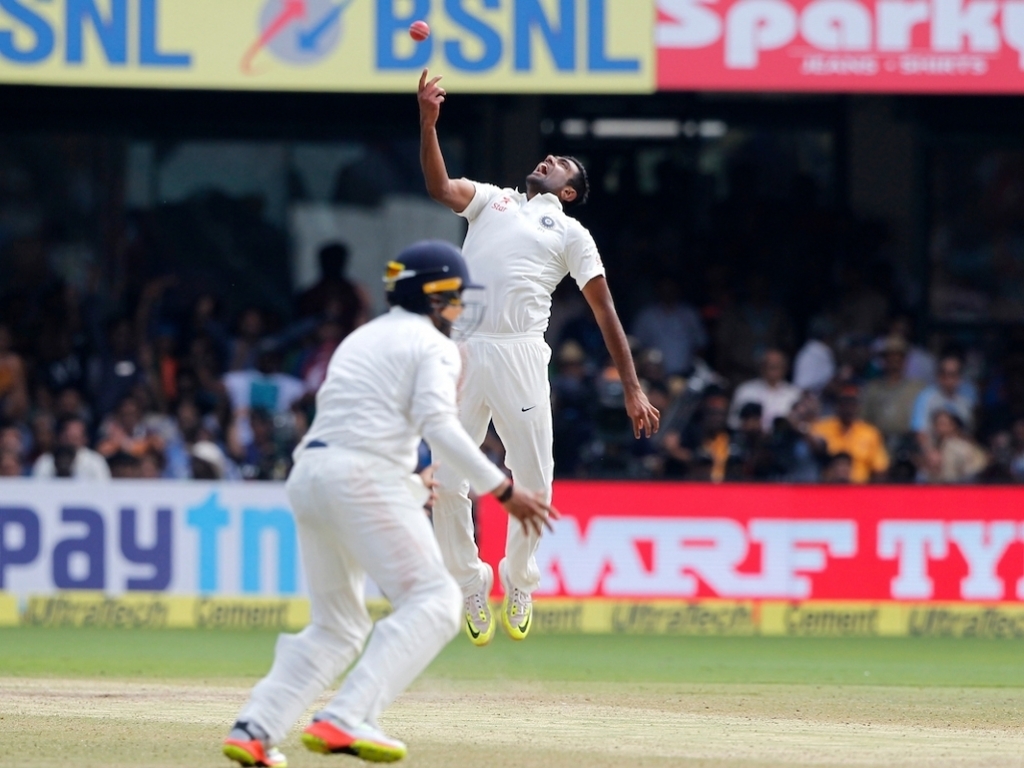 Australia gave themselves a sniff at victory after knocking over the Indian tail cheaply but would ultimately fall 76 runs short of the 188 runs they needed to win the second Test.

India slipped from 213/4 overnight to 274 all out as Josh Hazlewood and Mitchell Starc made merry.

Cheteshwar Pujara fell just 8 runs short of what would have been possibly his most important Test century but in the end his 92 was still critical in India securing the win.

Having lost Rahane (52) and Karun Nair (0) off successive Starc deliveries the India tail was exposed with Hazlewood bagging the scalps of Pujara, Ravichandran Ashwin (4) and Umesh Yadav (1) before Steve O’Keefe wrapped up the innings with the dismissal of Ishant Sharma (6). 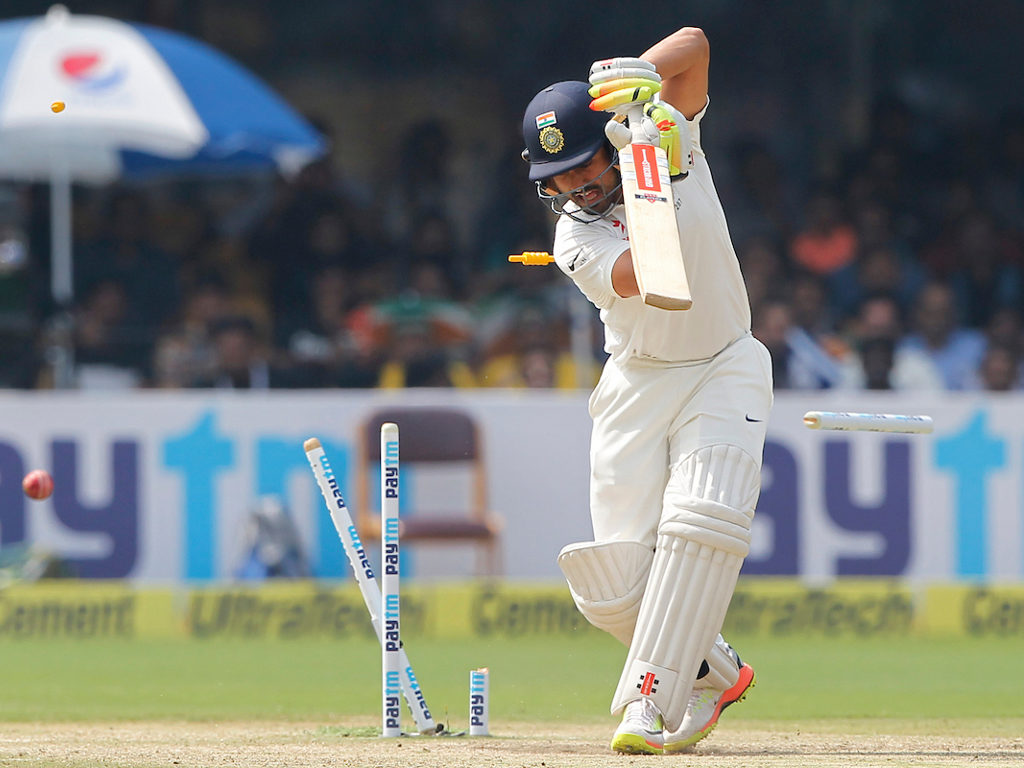 Australia were set a target of 188 runs to win but on a pitch with wildly uneven bounce it was always going to be tough.

Openers David Warner and Matthew Renshaw (5) got the visitors off to a promising start though moving to 22 before Umesh hit a crack and found the edge of the latter’s bat.

Warner was struck on the pad having made 17 and chose to review the decision, the replays showed that both the impact with the pad and it’s course to the stumps were ‘umpire’s call’ and Ashwin had the first of his six wickets though the left-hander might question the accuracy of the technology.

In a Test marked by poor reviews  there was always likely to be more DRS drama but the next act would feature a poor decision not to review from Shaun Marsh (9) who was given out leg before offering no shot but having decided to accept the decision replays showed the ball tracker would have saved the elder Marsh. Australia were 67 for 3 and wobbling. 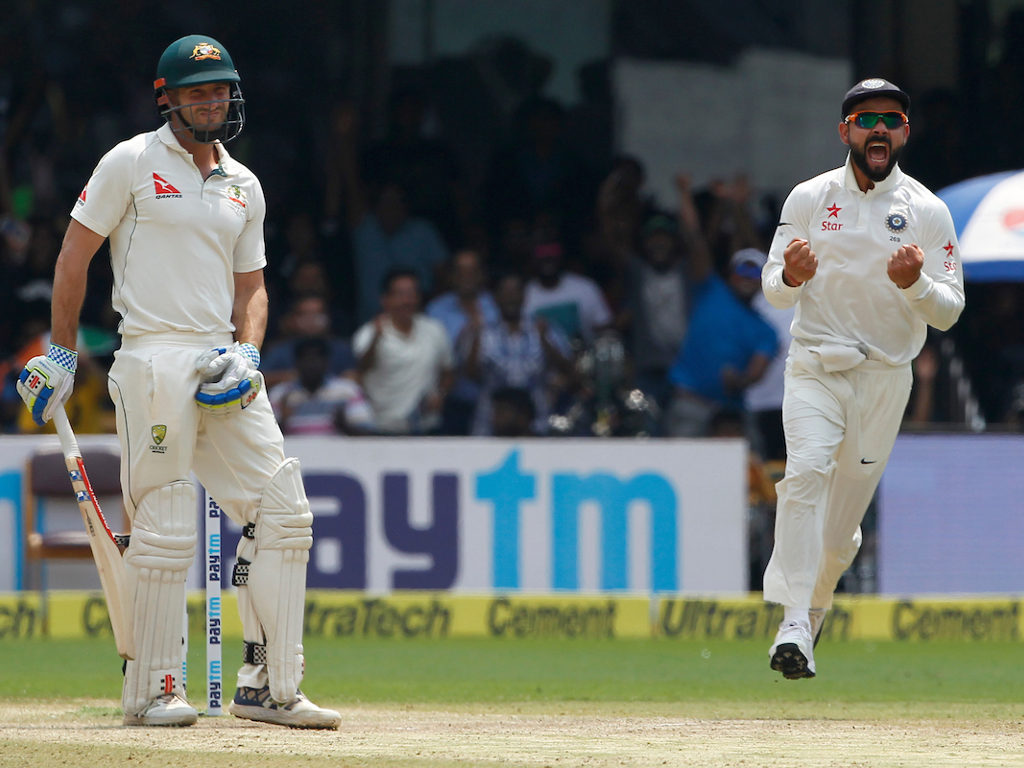 Steve Smith top scored with his 28 but could do little about a delivery from Umesh that died on the pitch and hit him low on the pad in front of middle. Smith pondered what might have gone down as the worst review in history looking to the changeroom for a clue before the umpires ably assisted by Virat Kohli ordered him to get on with it. Kohli was told off for his involvement.

Peter Handscomb and Mitchell Marsh (13) revived Australia’s hopes with a 27 run stand that took the tourists into three figures before the younger Marsh gloved one from Ashwin onto his thigh pad and into the hands of Nair who nearly fluffed the chance in his excitement.

With Marsh gone India were firmly in control and welcomed to the crease Matthew Wade who lasted just five balls before edging one into his pad, the ball looped up to short leg but the position was vacant but wicketkeeper Wriddhiman Saha was on his toes and moved like lightning and got a big dive out to complete a great catch, Ashwin had three and Australia were on the ropes at 101/6.

Starc strode out to the wicket, walking into a battlefield with a fired up India knowing he is the last recognized batsman in the team. He couldn’t play the hero though as an Ashwin topspinner went through him and clattered into his stumps, he was gone for 1 and Australia were 103/7. 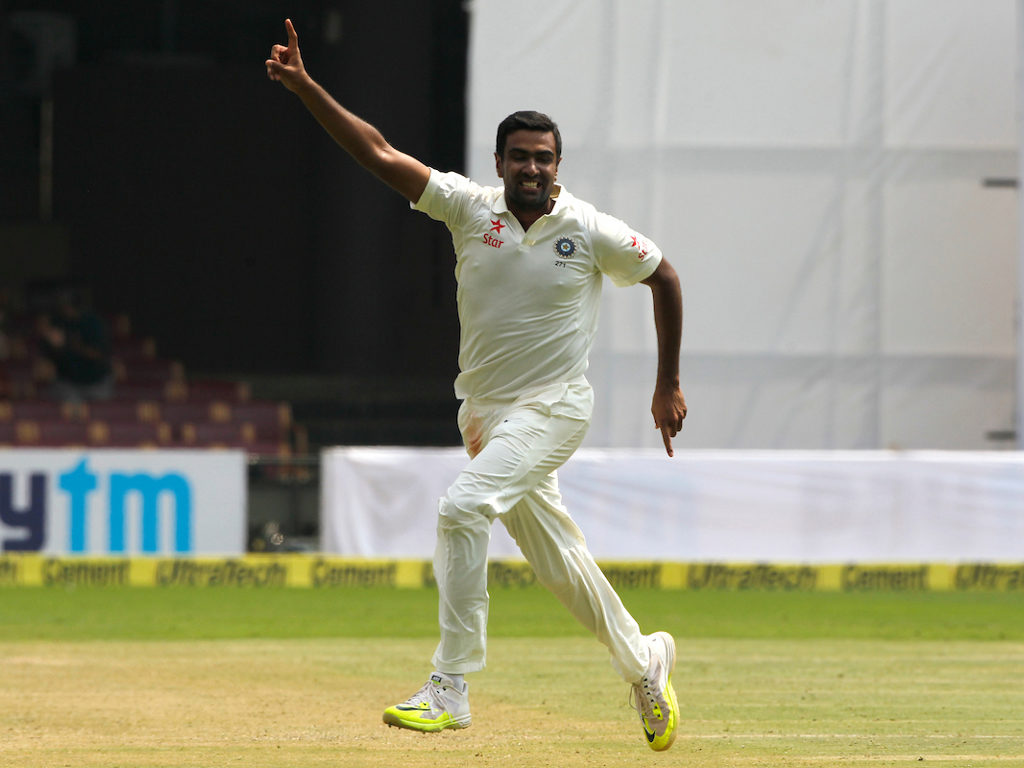 Handscomb was now left to try and rally the tail but he couldn’t shield O’Keefe (2) from Ravindra Jadeja who found a crack in the pitch that caused the ball to die and just about roll into the base of the stumps.

With hope fading fast Handscomb had to get on with it and would sky one from Ashwin which keeper Saha rightfully called for and the man with the gloves made no mistake, the Victorian had to go for 24.

It was only a matter of time before India wrapped things up and fittingly it was Ashwin who completed the win taking a regulation catch off his own bowling to send Nathan Lyon packing and level the series at 1-1.

Lokesh Rahul was awarded the man of the match award for his brace of half-centuries as India won by 75 runs.

The hometown hero Rahul said after the match: “There is no better place for me to perform like I did.

“I told them if we get 150 lead we will win by 30. We knew the third day was the best day to bat on, and the approach from us was brilliant. There was a time they said when I get past 20 I get a hundred.

“My shoulder gets quite sore, I can’t dive, and I have to restrict a couple of shots. It is not such a bad thing. I can bat within myself. I am enjoying batting with the problem”