Home Top Story India inch ahead at the Bullring

India inch ahead at the Bullring 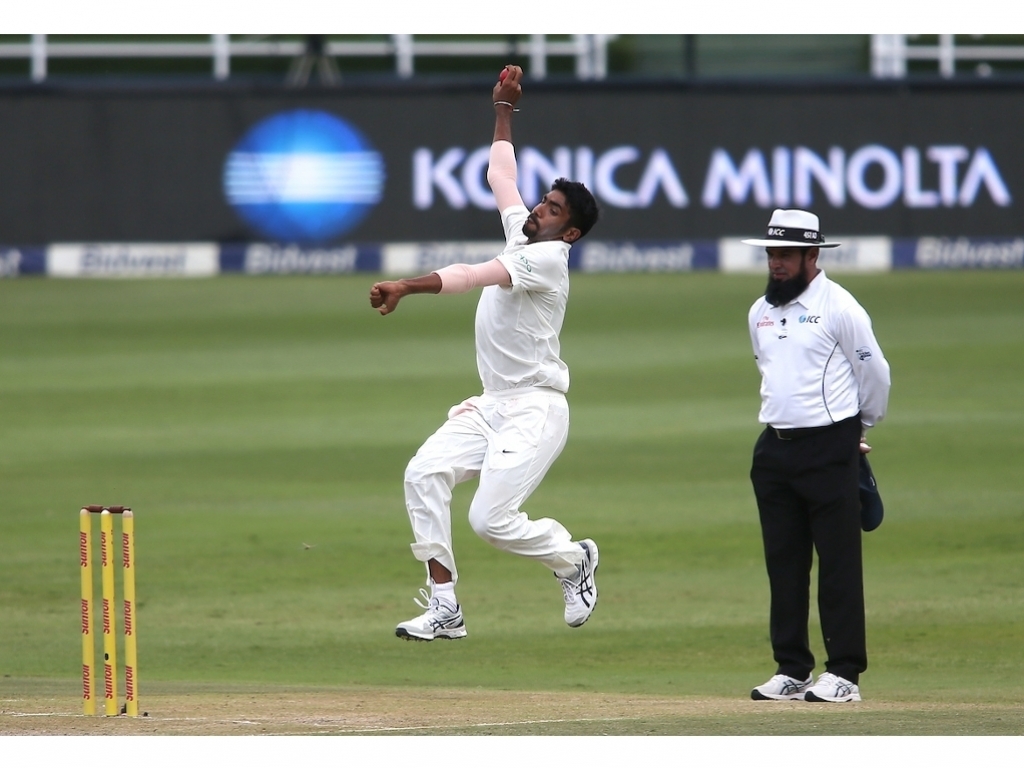 It may be another bizarre Test match on speed but on this occasion India are actually competing with a side that has embarrassed them in the series so far.

India even have their necks just ahead as they are 49 for 1, with a 42-run lead, going into the third day.

India fought their way back into the match by way of a brilliant Jasprit Bumrah five-fer that kept South Africa to a very narrow seven-run first innings lead.

Hashim Amla put together a fine 61 but Bumrah and India showed that they too can exploit these extraordinary bowler-friendly surfaces.

South Africa had begun the day on 6 for 1 and any hopes that the pitch would have settled down a bit were soon dismissed as it became clear that batting was not much short of impossible.

Dean Elgar (4 off 40 balls) nicked off early to Bhuvneshwar Kumar (3-44) and it became clear that India’s scant effort of 187 all out on the first day, might have not been such a laughable total after all.

Hashim Amla was to be the batsman to try hold the South African first innings together. In Kagiso Rabada (30 off 84 balls) he found a partner that batted more like a top-order batsman than a nightwatchman and the pair added 64 very valuable runs for the third wicket.

Rabada was given a well-deserved standing ovation by his home crowd after he edged Ishant Sharma (1-33)to the good hands of Rahane and thereafter, Amla struggled to find support from the middle order.

Each of AB de Villiers (5 off 19 balls), Faf du Plessis (8 off 19 balls) and the out-of-sorts Quinton de Kock (8 off 22 balls) failed to make double figures during an afternoon session where the ball hopped, seamed and bounced (and didn’t) under a light haze above the Wanderers that reminded one of when a Sreesanth-led attack bowled South Africa out for 84 runs in the second innings of a match that India would go on to win.

Virat Kohli continued to be on the bad side of the review system during that intriguing period that would have, for a change, inspired youngsters to bowl more than they bat. Twice he reviewed not out decisions that DRS held up as they were “on-field calls” and then he failed to review an LBW shout by Ishant against AB de Villiers that was crashing into leg stump.

It mattered very little as De Villiers was very soon bowled by a deadly inswinger by Ishant. Bumrah (5-54) then bowled du Plessis in similar fashion soon afterwards and then went on to account for De Kock via an edge to the ‘keeper. The Proteas were 125 for 6 and a lead suddenly looked like something the Amla would give his arm for.

In a steely Vernon Philander (35 off 55 balls), Amla finally found someone capable of building a little partnership. The pair added 44 runs before Amla decided to match Philander’s aggression and holed out to square leg. Philander then hooked into the deep and died by the sword as Bumrah took a fantastic catch running around to his right on the boundary and the game was almost up.

The hosts were bowled out for 194 and took a slender but valuable 7-run lead to the into the second innings’.

20 wickets had fallen in a little over five sessions and India decided to tinker a little with their batting order. Wicketkeeper Parthiv Patel, with aeons of limited overs experience, was promoted to opener in a move that hinted at a desperation to save Virat Kohli from being exposed until another day. Patel managed a better than a run-a-ball 16 before Markram took a neat catch at third slip as Philander drew first blood.

There were a few edges and LBW appeals but Murali Vijay (13 not out) and KL Rahul (16 not out) have done well to see off the beginning of what will no doubt be some sustained artillery fire. At 49 for 1, the visitors have a 42-run lead on a surface where anything above 170 runs will take some getting.