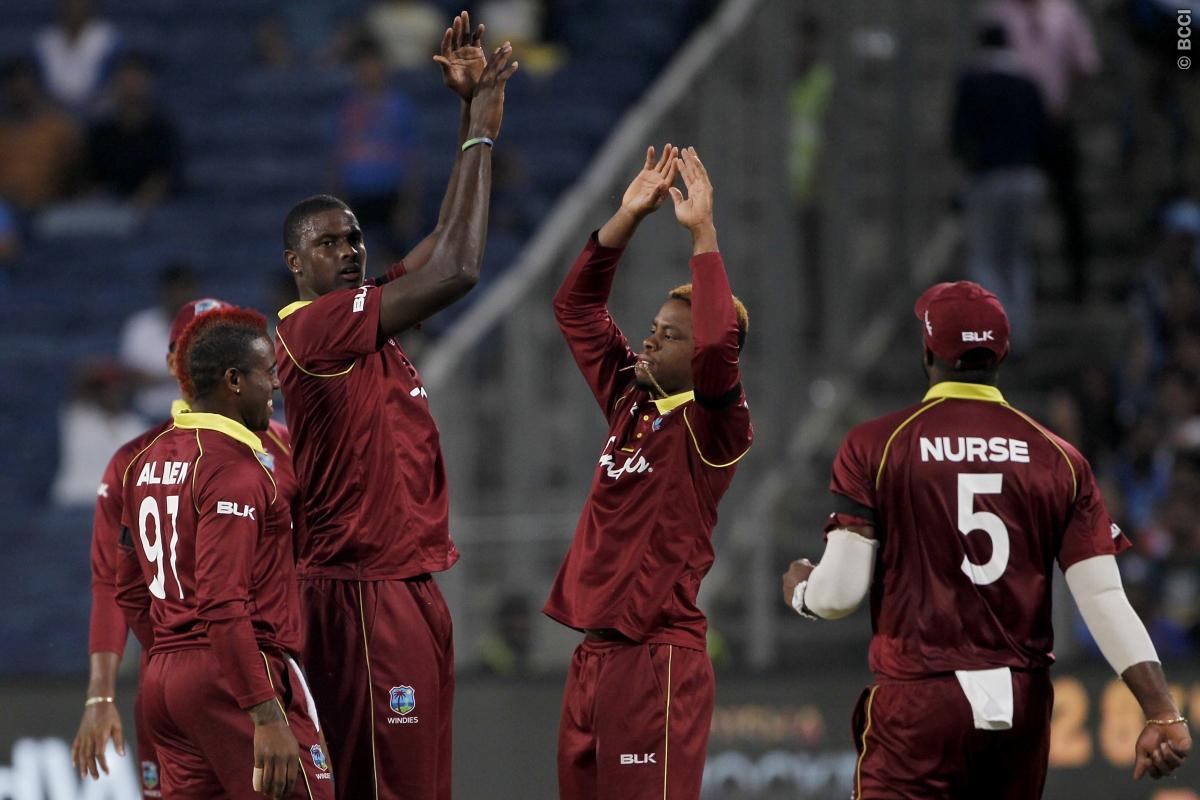 A third successive ODI hundred from Virat Kohli propped up the India effort but he lacked support from the rest of the Indian middle-order as the Windies emerged victorious by 43 runs.

After a thrilling tie in the second ODI it was still all to play for in this five-match series as the third match got underway in Pune. The star man this series, and in ODI cricket in general, is Virat Kohli and he continued his ridiculously good form to make his third successive ODI hundred, becoming the first Indian to do so and the 10th batsman overall. While Kohli was superb he had very little support from his team mates and some tight bowling from the Windies saw them win by 43 runs.

India won the toss and put the Windies into bat and the visitors got off to a bright start with Chandrapaul Hemraj and Kieran Powell both regularly finding the boundary in an opening stand worth 25 quick runs. However, neither opener could make the positive start count with both departing to the bowling of Jasprit Bumrah. When Marlon Samuels was gone to Khaleel Ahmed it was 55/3 and Windies were in serious danger of collapsing and failing to put on a competitive total.

A blistering stand between Shai Hope and Shimron Hetmyer brought the Windies back into the match. The stand was worth 56 from 38 balls with Hetmyer the real aggressor on his way to 37 (21) in an innings that included three big sixes. He went for one big shot too many and was out stumped off the bowling of Kuldeep Yadav to leave the Windies 111/4 off 19.3 overs. The rate was fantastic, but the regularity of wickets meant that Windies were still chasing the game.

When it became 121/5 when Rovman Powell attempted a big hack at the ball and a bottom edge gave a difficult catch to Rohit Sharma at first slip off Kuldeep which he claimed spectacularly the Windies needed something special from the lower order to keep them in the hunt.

While wickets fell, Shai Hope stood his ground on his way to 95 (113) that held the innings together. He fell just short of a second successive century after his 123* in the second ODI, and despite a well-made 32 (39) from Jason Holder the Windies were once again struggling in the pursuit of a total that would put any kind of pressure on the Indians.

It was Ashley Nurse that took the Windies to their eventual 283/9 from their 50 overs with 40 from 22 balls before he fell to Bumrah to give the seamer his fourth of the game. It was more than the Windies were set for throughout much of their innings, and it proved to be enough to secure victory.

Wickets would be the key for the Windies, and Holder bowled Rohit with the 12th ball of the innings to leave India 9/1. That wicket brought Virat Kohli to the crease and the Indian skipper just picked up from where he left off in the first two matches. Having made 140 in the first match and 157* in the second on his way to 10,000 runs in a record-breaking 205 innings, Kohli made 107 here as he looked to marshall the Indian chase.

Wickets continued to fall other end, with Shikhar Dhawan dismissed lbw by Ashley Nurse for 35 and Ambati Rayudu hitting a ball on to his stumps off the bowling of Obed McCoy for 22. A bright and breezy 24 (18) from Rishabh Pant was ended when he gloved a catch to the ‘keeper off Nurse and Dhoni also went caught behind when he edged one from Holder.

The closest Windies came to dismissing Kohli before he reached yet another ODI ton was when he was nearly run out on 73 but Nurse could not manage to turn the ball on to the stumps and he made his ground. The issue was with the top order gone it was left to Kohli and the bowlers to get to the target, and when the captain was bowled by Samuels for 107 there was very little batting left for India.

The rate soon crept passed 10-an-over and there was too much left to do for the Indian bowlers with the hosts bowled out for 240 as the Windies leveled the series at 1-1 with two matches still to play.