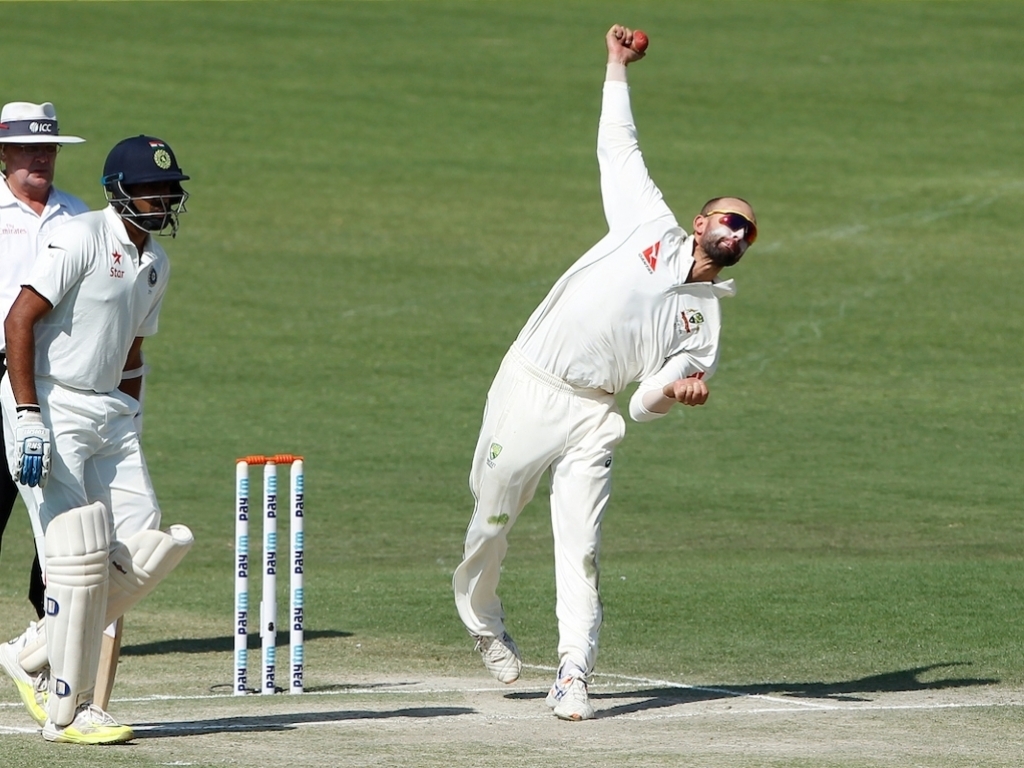 India reached 248 for 6 by stumps on day two of the fourth and final Test against Australia in Dharamsala trailing by 52 runs.

A flurry of wickets from Australia off-spinner Nathan Lyon kept India from establishing dominance on a day of enthralling Test cricket.

Lyon accounted for the India middle-order ensuring that the hosts lower-order are faced with the daunting task of establishing a decent first innings lead or at least erasing the deficit.

Murali Vijay (11) was the first India batsman back in the hut after Josh Hazlewood’s patient line and length approach drew a mistake out of the opener and he nicked off.

India’s two most reliable batsmen, Lokesh Rahul and Cheteshwar Pujara, then hunkered down to add 87 for the second wicket before Pat Cummins broke through.

Cummins bowls a vicious bouncer and Rahul (60) won’t be thrilled with himself for going after it especially after he toe-ended the ball to David Warner at cover.

The knock was Rahul’s fifth fifty in this series but he is yet to convert a start into a ton.

Australia then set about shackling the middle-order of India with Lyon and left-arm spinner Steve O’Keefe putting in a shift and a half.

Lyon accounted for Pujara as the dangerous number three gloved one to short leg to depart for 57.

When Lyon got Karun Nair (5) cheaply it looked like Australia were poised to rip through the India middle order.

However Ajinkya Rahane (46) and Ravi Ashwin were able to stem the flow of wickets adding 49 before Lyon struck again to remove the former courtesy of a brilliant catch by Steve Smith.

Australia delayed taking the new ball and were vindicated in that decision when Lyon claimed his fourth wicket of the day removing Ashwin for 30 and leaving India 221/6.

Wriddhiman Saha (10*) was dropped by Matt Renshaw off the bowling of Pat Cummins late in the day, while Ravindra Jadeja smashed two towering sixes in his unbeaten 16 as India reached 248 for 6.

The game is interestingly poised and that dropped catch may yet prove critical.

Speaking after play Lyon, who ended with fugures of 4 for 67, said: “There was a bit out there for me.

“We bowled well in partnerships. In the first couple of sessions, didn’t do much, but as the day progressed there was variation in spin and also bounce. More similarities with Bangalore. The quicks will be in too with up-and-down bounce.

“We would like to come out and bowl well and take the four wickets and then bat well. The finger is fully healed now. They are a world-class batting line-up, and you have to challenge them consistently. Long way to go in the rest of the series.”