Maharaj keeps Proteas in it 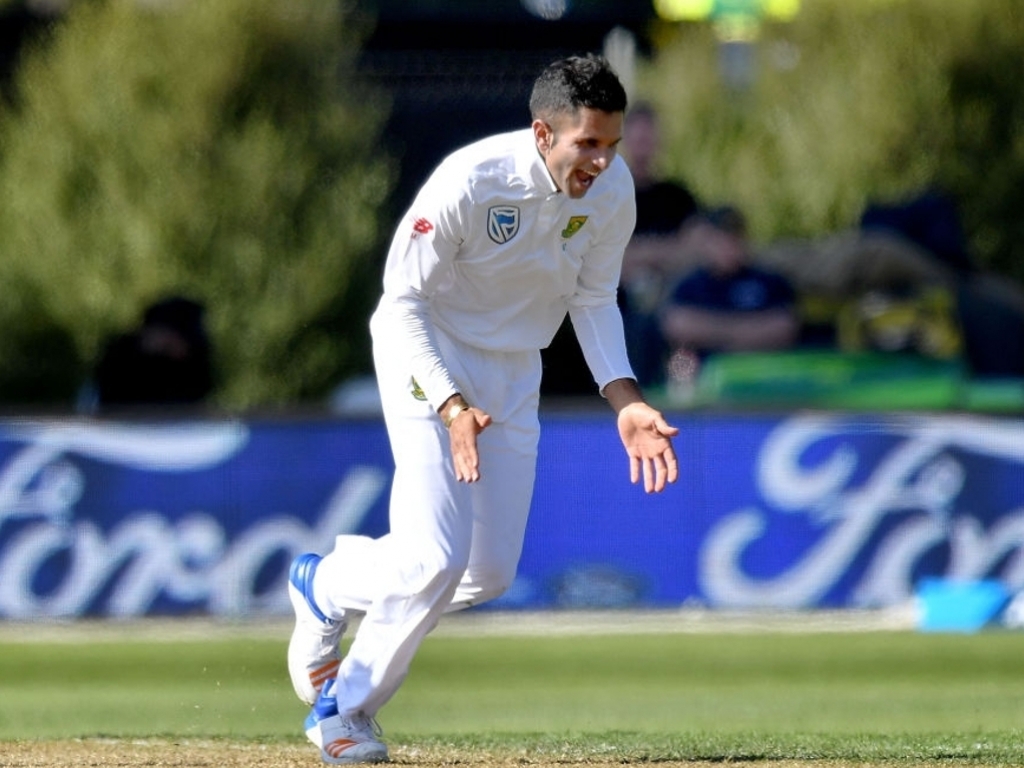 South Africa lead New Zealand by 5 runs with nine wickets in hand at the end of the third day in Dunedin after Kane Williamson (130) guided his side to a lead but Keshav Maharaj (5-94) kept the innings in check.

The Proteas would then reach 38 for 1 before bad light stopped play.

Williamson was cautious at the start of the day as he waited the better part of an hour before adding to his overnight score of 78 but once he was happy that he had played himself back in, he accumulated runs handsomely all around the ground. It was a very fine innings that was every bit as good as Elgar’s 140 for South Africa the day before.

New Zealand started the day on 177 for three and night-watchman Jeetan Patel (16) did not last long in the middle as he holed out off Vernon Philander (2-67). Neither did Jimmy Neesham (7), who nicked off to Morne Morkel (2-62) and then the scorecard read 193 for five.

Neesham will think himself extremely unfortunate to have been given out by the third umpire Rod Tucker, as the bowler looked to have overstepped the mark and bowled a no ball. The decision stood, which went down like a lead balloon with the boisterous crowd.

A doughty BJ Watling (50) then put on 84 runs for the sixth wicket with his captain before Williamson edged one from Rabada (1-92) to be caught behind. A plucky Watling fought on and cameos from Neil Wagner (32) and an injured Ross Taylor (15 not out), who resumed his innings at number 11, helped the hosts to a moderate lead.

Despite the tail-wag, New Zealand would have hoped for a healthier lead. All told, they lost their last five wickets for 64 runs as the Proteas’ attack found some reverse swing and put in a better performance that the previous evening. Keshav Maharaj (5-94) justified the selectors’ faith in him as the country’s best Test spinner as he claimed his first five-wicket haul in an effort that boasted considerable amounts of guile and skill and on a very flat pitch.

“It is extremely tough to bowl on this wicket,” he told us after the match.

New Zealand then took to the field under very cold and grey skies and it was not long before an umpire’s finger went up, neatly protected from the chilly breeze by a black glove! Stephen Cook (0) had edged the ball to the ‘keeper and walked off to the pavilion disappointed at having failed to add to his poor first innings score of three runs.

Video replays suggest that he should have reviewed the decision as daylight could be seen between bat and ball and the noise on the snickometer was clearly that of his bat nicking his pad.

On a day when it appeared things couldn’t get much more bizarre, a fire alarm then sounded from the grandstand. A fire engine arrived and the ground was evacuated entirely, cameramen and all! It appears the alarm was set off by a bit of steam in a kitchen but in a country where Health and Safety has gone mad, a twenty-minute delay saw most of the 3000-strong (that’s actually a nice big crowd for these quaint parts) decide not to come back for the next ten overs or so.

Those overs were somewhat uneventful after a light-meter came out and the umpires had told Williamson that he was only to use spinners in the gloaming. There was little or no turn on offer and Hashim Amla (23*) and Dean Elgar (12*) were untroubled. The Black Caps’ think tank then decided they would rather come back fresh with the quicks tomorrow rather than waste a new ball and when they tried to bowl a seamer, the umpires took them off to stumps.

Watling summarised the state of play post-match by saying, “It’s obviously pretty even. It’s a grind out there – the scoring is a bit slow. The game is 50/50 and a crazy session can change that.”

This game probably will require a crazy session if it is to produce a result other than the draw. Weather forecasts are grim for day five and we are likely running out of time on a flat track. However, cricket certainly isn’t known as a crazy game for nothing.