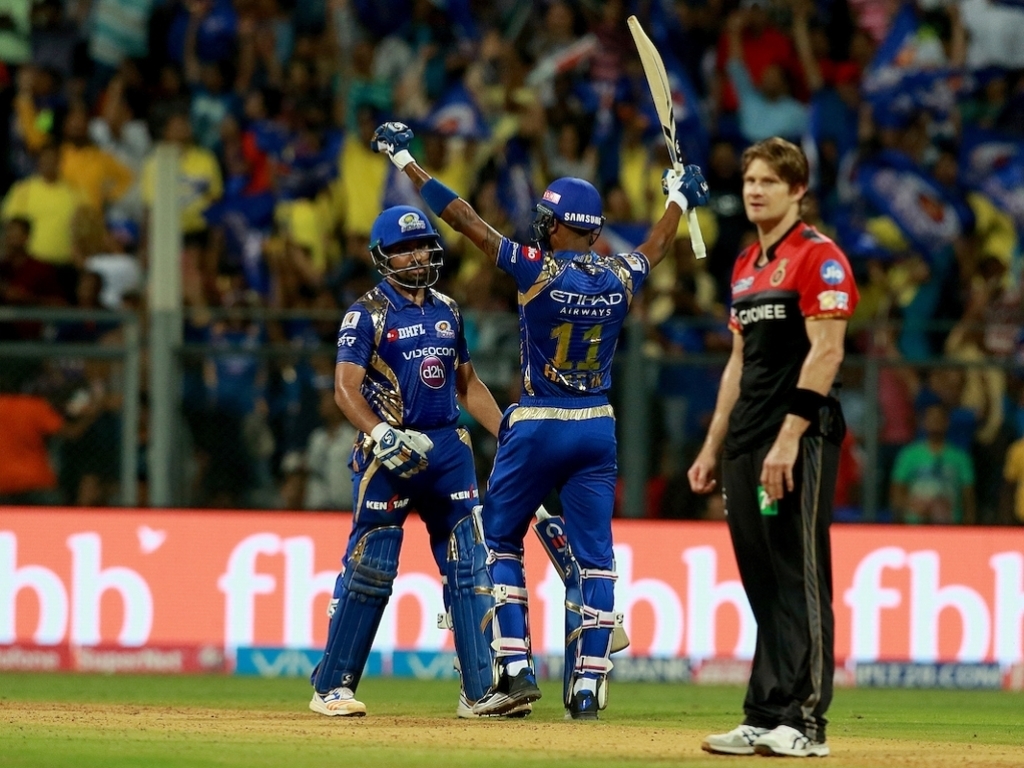 The Mumbai Indians scraped a five wicket win over the Royal Challengers Bangalore with one ball to spare at the Wankhede stadium.

RCB had posted 162 for 8 in their twenty overs showing a much improved batting performance but it proved to be a little short.

The men from Bangalore lost Mandeep Singh (17) and Virat Kohli (20) in the powerplay before AB de Villiers and Travis Head carried them into the 11th over.

It was then that Head (12) slapped a Krunal Pandya delivery to his brother Hardik on the midwicket fence to leave RCB 85 for 3.

De Villiers top scored with 43 off 27 balls striking three sixes and three fours in his innings before Krunal Pandya nabbed his prize wicket.

Shane Watson’s return to the RCB lineup didn’t start well as he was bowled by Jasprit Bumrah for three to leave RCB reeling.

Kedhar Jadhav (28) and Pawan Negi (35) carried RCB to the final over adding 54 for the sixth wicket before Mitchell Mcleneghan removed them both in an excellent final over that earned the Kiwi the honour of being the pick of the Mumbai Indians bowlers with figures of 3 for 34 from his four overs.

However Jos Buttler (33) and Nitesh Rana (27) rebuilt and laid an excellent platform for the run chase.

Despite Negi removing Buttler and Rana in successive overs, both caught by Aussie Head, Rohit Sharma played a captain’s knock to see his team home.

Rohit (56*) held things together even as Kieron Pollard (17) and Karn Sharma (9) lost their wickets and Krunal (2) retired hurt.

Finisher Hardik did his job striking 14 not out off nine balls and seeing out the win with skipper Rohit.

Man of the match and Indians skipper Rohit said after the match: “Got tight in the end but we always knew the wicket was good and we could get to the last over and finish it off. It was a clinical performance.

“I know we won in the last over, but I’ll take that win. Very important in this format to keep taking wickets and we’ve been doing it consistently so far.

“One good thing is that we haven’t been complacent. We want to finish games in a clinical manner and we did it today. Personally, it felt good to spend time in the middle.

“I picked my areas and backed myself to hit in those areas. You get value for your shots at Wankhede and I just wanted to find the gaps. We want to be ruthless in our approach and finish on top of the table. The tournament doesn’t end here. We have to stick together and play as a team.”