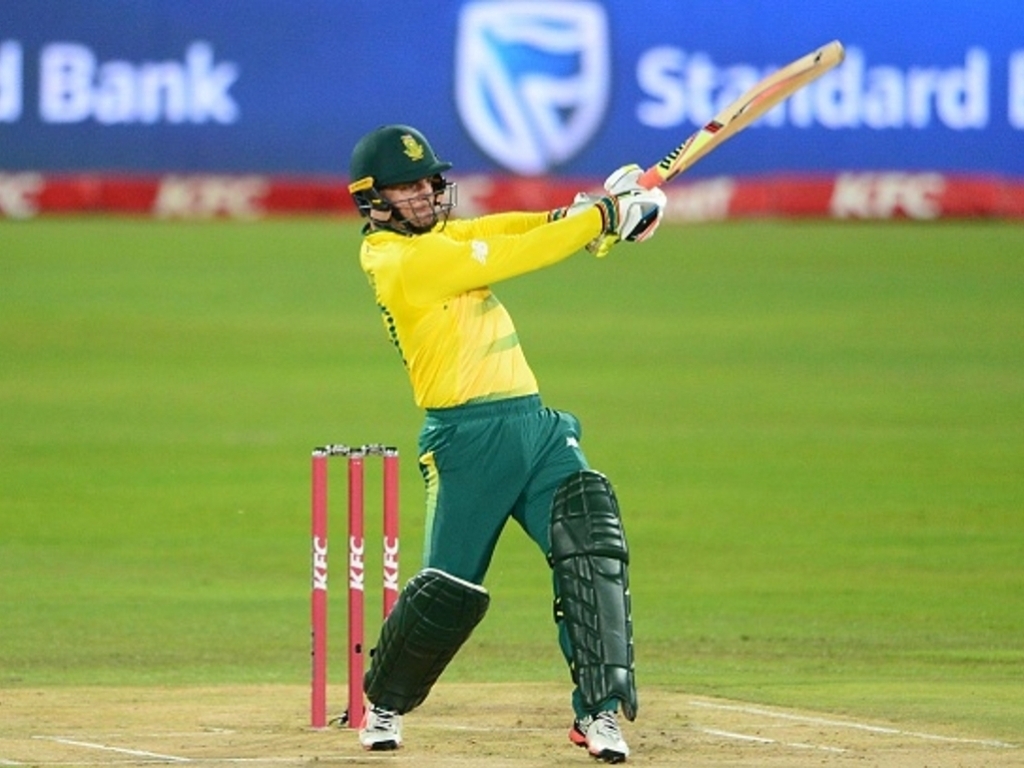 A quick-fire 40 from David Miller was backed up by an impressive performance in the field from a young and inexperienced South African team to give them a 19-run victory over Sri Lanka in the opening Twenty20 fixture in Centurion.

Seemingly relentless rain threatened to wash out a fixture where a packed house waited patiently on the grass banks under umbrellas but finally a 10 over match begun at 8.30pm, two and a half hours after the scheduled start.

Angelo Mathews had won what is usually a beneficial toss in a curtailed match and he duly elected to bowl with the wisdom that he would know his team’s target and the knowledge that Duckworth Lewis can favour the chasing side if the match were to be further shortened.

After making such light work of this opposition in the Test series, South Africa’s selectors took the opportunity to rest some players and to blood some others. Only three members of the 13-man squad played in last year’s Twenty20 World Champs and five debutants were named in this evening’s starting XI. They are Jon-Jon Smuts, Theunis de Bruyn, Mangaliso Mosehle, Andile Phehlukwayo and the 20-year old Lungi Ngidi.

The visitors kept the home side vaguely in check as the top three batsmen fell five overs for 50 runs. Kulasakera and Lakmal bowled with their usual guile but struggled to grip the wet ball and any attempts at spin bowling were largely negated by the slippery conditions and the flat track.

South Africa’s most experienced batsman in the line-up, David Miller, made the decision to consolidate with his skipper in the middle overs (if there is such a thing in a ten over match!) and the run rate dropped to 10 runs per over as Gunaratne bowled two overs for only 12 runs.

But Miller soon got into his stride and began stroking the ball effortlessly over the heads of helpless fielders. Three sixes and three fours saw the batsman quickly move to 40 runs from 17 balls before he was caught on the boundary.

Behardien (31* off 18 balls) saw things through to the end would no doubt have enjoyed being on the non-strikers end as Mosehle walloped his first and only ball in international cricket for six over point.

127 was always going to be an enormous ask, even at the high-scoring Supersport Park ground, but Sri Lanka certainly made a fist of it and rewarded the patient crowd with some wonderfully exciting Russian-roulette style cricket.

Openers Dickwella (43 off 19) and Dhananjaya de Silva (27 off 16) put on an impressive 59 runs for the first wicket in just five overs in a streaky effort that included a few edges to the boundary.

Even after Tahir dismissed each of them, the chase still contained a glimmer of hope for they were often ahead of the asking rate and 12 an over at Centurion is more like 10 or 11 in most of the world’s international grounds. Prasanna (13 off 3) hit sixes off each of his first two balls but wickets continued to tumble.

Man-of-the-match Ngidi (2-12) bowled a beautiful over at the death to announce his name with a remarkable debut and Sri Lanka could only muster 107 for six. Big crowds are again expected at each of the next two matches in this series, at the Wanderers on Sunday and at Newlands on Wednesday.